The Wetherby mixed first team are having a reasonably successful season this term. Playing in the York and District League Division Two they have been victorious in half their six outings this campaign and sit in mid table but still poised for a promotion push.

The Team had an ideal opportunity to maintain that momentum when bottom side Wiggington visited Castlegarth on Tuesday, but as the Second team found out the same evening, the table can sometimes be misleading.

Due to absence the team had to call upon the Harrogate first team mixed ladies pair of Rachel Hill and Helen Robinson with Becci Jones teaming up with father and Wetherby chairman Steve Jones too.

Hill partnered devastating left hander David Corbyn and the pair were in fantastic form as they tore the opposition to pieces with some relentless fast paced tennis. They secured three straight victories and an impressive 26 points on the night to finish as top scorers.

The Jones partnership also proved to be extremely profitable. Steve was at his canny best with some deft touches whilst daughter Becci belied her tiny frame to dish out some stunning baseline tennis with shots of real ferocity. They also completed the hat trick and came up just one game short of the first couple for a total of 25.

Not to be outdone James Landau and Helen Robinson were also playing some quality tennis and two wins and a narrow loss resulted in a useful 19 points on the board and ultimately a convincing overall win of 70-38 for the hosts.

This vital win lifts Wetherby into the top four and keeps them on the tails of the leaders.

There will be tougher battles ahead but the team have been competitive in every match so far this season in a section that has provided some extremely close encounters.

They travel to Dunnington next week looking to consolidate that top four position against a promotion rival so this really will be an important fixture.

Well done to all and good luck with that promotion charge. 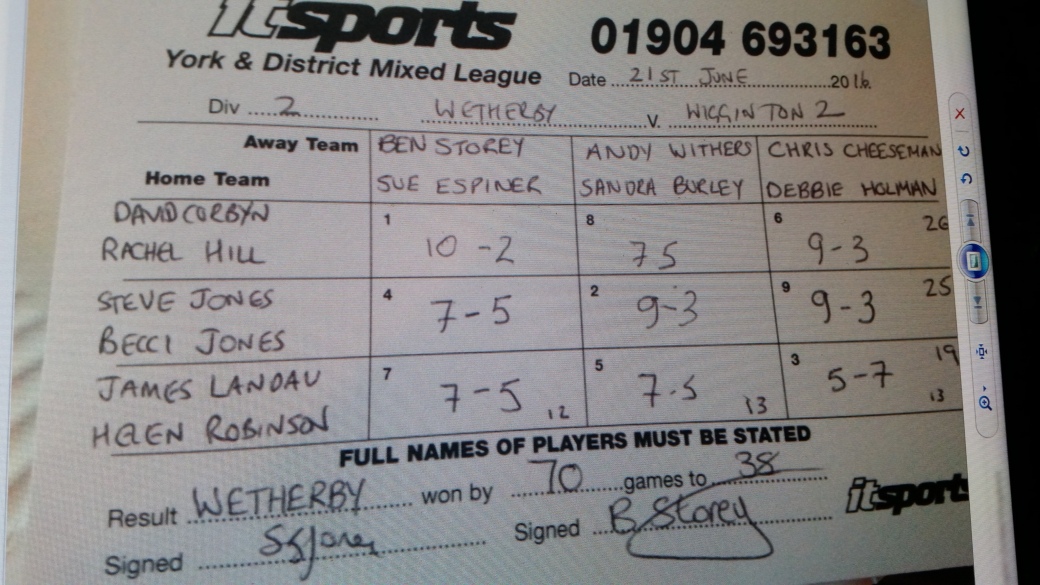