The Wetherby Men’s Second team have been fighting relegation this term in the very strong section which is Level 2 Division Five in the York Men’s Doubles. They appeared to be winning that battle but ahead of yet another hugh game with bottom side Cliffe it has been revealed that three and not two teams that we thought, would actually be demoted.

Wetherby are presently third bottom and therefore in one of the relegation spots whilst Cliffe are now relegated being too far adrift in bottom position.

On a lovely Sunday morning the pressure was therefore on the home side to collect some vital points to avoid joining the visitors in relegation and they were able to pick from relative strength. Captain Mike Park continued alongside son Ollie Boyes Park and this pair have enjoyed a great season been constantly the best performing most weeks. Today was no exception although they like all the Wetherby players would struggle against an above average Cliffe number one of Joel and Cal Hancox. Mike and Ollie lost 2-10 against the Hancox pair but bounced back to record wins of 9-3 and 12-0 in their remaining games to accumulate an impressive 23 points on the day. Mike was noticeably struggling with injury towards the end but in captain fantastic style soldiered on.

The Two Mikes,Abel and Connolly are also a strong partnership and would certainly provide power and excellent court coverage between them. They also succumbed 3-9 to the powerful Cliffe one pair but won their two remaining rubbers 8-4 and 11-1 to claim an impressive 22 points.

Marc Bickers and Luke Green paired up at three and again these two big hitters would be counted on to keep the scoreboard ticking over. They only managed a single win 8-4 success over Gary Hancox and Steve Davis but picked up another 8 from two defeats to finish with a crucial 16 points which ensured the home side triumphed 61 games to 47 and a 8-4 match result.

So following the weekend action Wetherby now know they need to climb a place to retain their status. They find themselves 3.5 points behind Strensall and these two clubs look set to battle it out to avoid filling that last relegation spot. Unfortunately for Wetherby they have played one game more and only have two games left to save themselves. Strensall travel to already relegated Sheriff Hutton next Sunday when they will fully expect to return with points so Wetherby can expect the gap between the clubs to have grown when they travel to Starbeck on August 7.

It does seem exceedingly harsh that in an 8 team league, three should face the axe, but they can only win their last two games and hope for help elsewhere. Good luck with that and we will bring you news of the game at Starbeck in two weeks’ time. 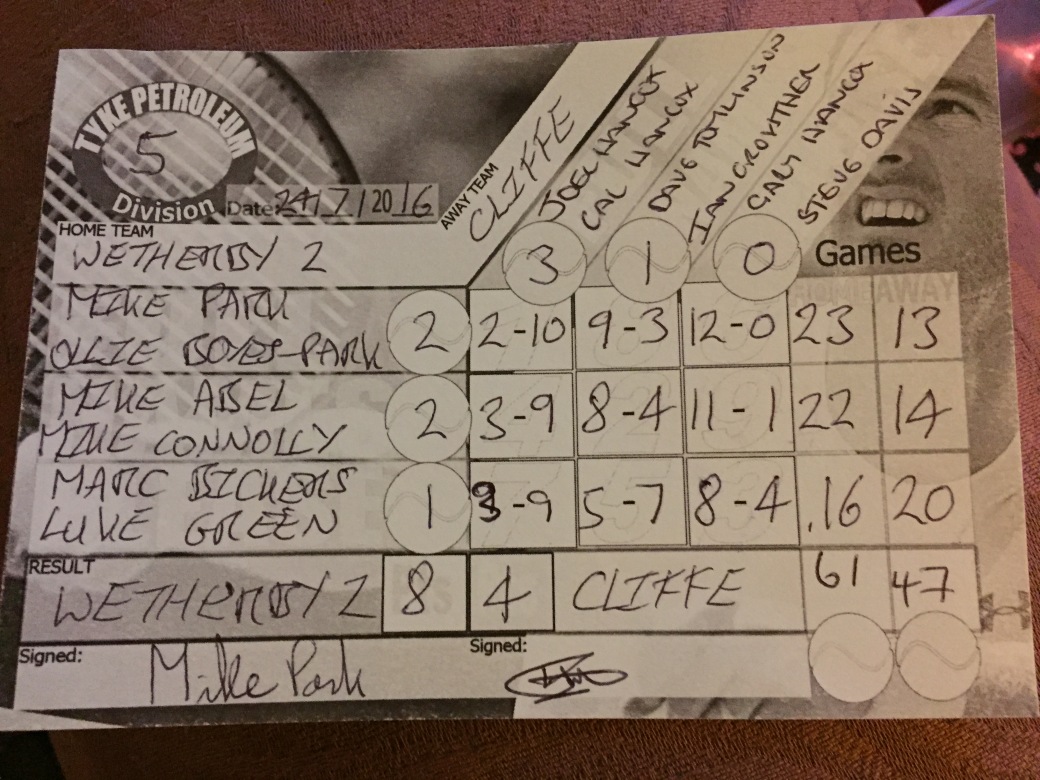 The first team who play in the same section are almost there as champions following a 4-8 win at Strensall. It would take something of a miracle to miss out but hopefully they will be officially crowned on August 21 when they travel to Cliffe.