Wetherby B hosted Wetherby A this evening in the Harrogate League Division Five Mixed doubles competition looking for the victory which would guarantee safety this term. However under the watchful eye of Harrogate League secretary Carolyn Rothwell Wetherby A were able to pick from strength and would ultimately run out comfortable winners as was realistically expected.

As the teams arrived to light rain there were slight concerns the game would not be able to go ahead but these fears were soon dispelled and despite a gloomy evening the rain ceased although an awkward wind made life difficult at times.

Regular number one duo for the A team Kevin Duckenfield and Fiona Chantrey went about their business in their normal efficient way and produced another three clinical performances in winning all four sets played. It always takes a very good couple to lower their colours and the pair, who have been excellent all year in fairness, beat B team captain Barry Johnson and Anne Lillywhite 1-6,4-6 before securing back to back 2-6 victories over Greg Vince and Janine Smith and finally Walter Skubiak and Ann Jones.

Wetherby A Captain Ian Teasdale was watching from the side lines where a good crowd had gathered to watch proceedings and he saw his usual partner Dawn Steel pair up with Neil Ripley who was fresh from helping the men’s third team win on Sunday morning. This pairing are very strong and utterly competitive and after dishing out a 1-6,0-6 beating to Vince and Smith followed up with 3-6 wins over Johnson and Lillywhite and Skubiak and Jones to also secure maximum points on the evening.

Louise Williams and Mike Triffitt made up the team at seed three and they played Skubiak and Jones on court three. After a close first set they ran out narrow 4-6 winners but the B team couple who play with wide smiles and in a friendly and happy manor, turned up the heat in set two to level the rubber following a fine 6-2 success to ultimately provide their team with their only point of the night.

Triffitt adopted a fairly laid back approach with the emphasis on a low error count whilst Williams played some great tennis with many punishing forehands as the couple went on to beat Johnson and Lillywhite 4-6 before closing the evening with a 2-6 victory over Smith and Vince.

In a match played in good spirits and with no drama it was the expected result.

For the A team they were left to reflect on a season which had seen only four defeats but crucially they had come against the two teams that were promoted and showed where they need to improve next term. A special thanks to long standing captain Ian Teasdale who once again did a fabulous job both on and off the court and all the team appreciate your undoubted efforts Ian.

For Barry Johnson and the B Team they have one match to save their season and what an epic it promises to be when they make a third trip north to visit fellow relegation threatened Burton Leonard. In a virtual winner takes all clash Wetherby must avoid defeat to retain their League Five status with defeat saving Burton Leonard.

Good luck in that match and again special mention must be given to Johnson who has overcome severe adversity on many occasions along with the unwanted record of six games falling foul of the weather this season. It would be fitting if he could lead his team to victory in their final game but regardless of that result he has led with dignity and professionalism throughout the season and for that alone his team mates applaud him. 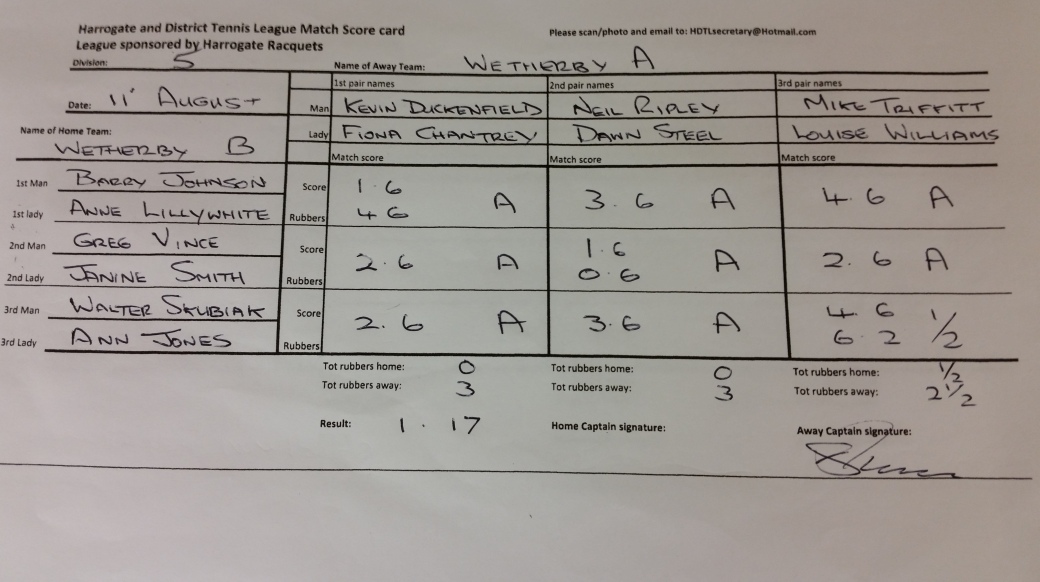