The Wetherby men’s third team played their final game of the season on Friday night when they made the long trek north to Dacre.Set in the backdrop of some wonderful scenery Dacre is certainly out in the sticks but thankfully the weather was kind and the match began in sunlight.

Dacre are now promoted followed a draw with Kirkstall on Tuesday but were looking for one further point to secure the title from their remaining two games. They have been strong this term and are currently unbeaten.

Wetherby had won their previous two fixtures and were going for a hat trick here in their quest to finish third. Once again Mike Triffitt stepped in at captain with David Morris enjoying himself in Cornwall and youngster Tom Pearson came in for his first start of the campaign as did the experienced Steve Jones.

Jones and Triffitt played seed one and opened against the useful home pairing of stand in captain Rob Pickard and Jack Hanson, who currently occupies fourth position in the League player rankings. Hanson looks a fine prospect and the youngster made an impressive start here firing down aces and producing some tremendous base line winners. The Wetherby men were struggling to cope and found themselves 5-0 down before a late rally allowed some respectability to the scoreboard as they lost the opener 6-3. However Jones started the second set well and began to show his undoubted class with some excellent serving and punishing returns of his own. Confident at the net his calm and calculated approach was begining to reap dividends. Triffitt was a useful foil providing able assistant especially with many useful returns to keep in the rallies and the occasional unorthodox winner that left Jones smiling bemused!.The duo were certainly enjoying this set and held their nerve to level the rubber following a 3-6 success.

Over on court two Peter Russell and Tom Pearson were playing home pair Russ Gaunt and James Hanson who is the younger brother of Jack. He too looks a great little player and the 14 year old was returning with power and aggression to trouble the visiting duo. However Pearson was his match and is also a hard hitter with tremendous court coverage and Wetherby took the opening set 2-6. Russell was enjoying his new partnership and was playing some useful tennis of his own and the pair continued to pile on the pressure. It was a much tighter second set with the short and crafty game of Russ Gaunt now coming into play but a 4-6 victory ensured a 0-2 win and left Wetherby ahead 1-3 following the completion of round one.

Hopes were high of a shock win and a first defeat for Dacre but Pickard and Hanson soon set about dispelling those fears as they were quickly out of the starting blocks to run out emphatic 6-0 winners over Russell and Pearson. The Wetherby couple found their feet in the second but were unable to stop the hosts winning 6-3 for a 2-0 success to put themselves back level in the match at 3-3.

All focus switched to court one and with a lack of floodlights and time ticking  visibility was starting to worsen as the dark skies began to form.  Young Hanson was playing well and the score stood at 2-2 after each player had completed one service game. However Jones was now in full throttle and producing some wonderful tennis with a fantastic shot array .He produced some bamboozling efforts to turn the match in the visitors favour and saw them clinch the first set 2-6. With the match won and home heads starting to drop Jones and Triffitt piled on the agony with Triffitt clearly enjoying the freedom afforded with such a strong partner to play some excellent tennis of his own. The final 0-6 second set was a little harsh on the hosts who played their part but the Wetherby couple were not to be distracted and completed a professional win.

The final scoreline showed Wetherby winning 3-5 and do indeed become the first side to beat the champions elect. Some excellent tennis on a pleasant evening with no disputes sounds the perfect recipe and even a pint afterwards in the local hostelry was taken to round off a memorable evening.

Thanks to our welcoming hosts and good luck in Division Five next season.

For Wetherby it looks like they will finish fourth as Kirkstall need to beat Alwoodly to reclaim third and with Alwoodly winless in two years a miracle is needed! .It has been an entertaining season with 16 players used at various stages.Something to build on for a promotion assault next term hopefully however.

Thanks to Tom and Steve for their excellent contributions this evening with Jones earning the man of the match honours after a very accomplished showing. 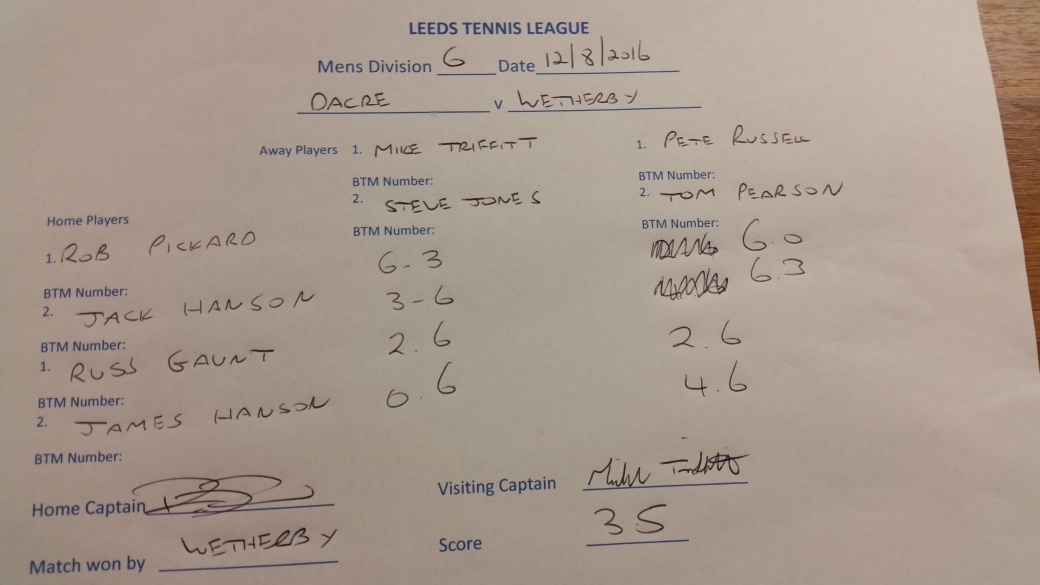