The York mixed one side completed their fixtures on Friday night but what a game it promised to be as they and visitors Dunnington were battling it out for the final promotion place behind champions Heworth. Dunnington had slipped up with only a draw at Bubwith in their latest outing which meant they arrived at Castlegarth just a point and place above the hosts. This effectively meant Wetherby needed to win but a draw was enough for Dunnington. Both teams were missing key personnel. For Wetherby captain Angela Crossley, Yvonne Mannall and Steve Jones were unavailable and Dunnington arrived without Jess Mitchell, Claudine Shaw and Tom and Nicola Loten.

On a dry evening the ever dependable David Corbyn started at seed one alongside Charlotte Todd and this partnership proved very fruitful. The fast and electric all energy game of Corbyn coupled with the slower, calmer but ultimately very effective style of Todd was an excellent combination and the duo managed two wins and a draw to accumulate a very useful 23 points and give the team a real chance of victory. However Dunnington number one Greg Ashcroft and Rosie Todd are unbeaten together this term and despite adopting a slower game they got their tactics spot on as they shared the spoils with Corbyn and Todd but ran out comfortable winners in their remaining rubbers to finish with an impressive 25 points.

James Landau and Jo Coverdale are regular partners this season and played seed two. They fell to the impressive Ashcroft and Todd and found Dunnington number three Alfie and Claudine Hubble a bit above average too before sharing the spoils with James Todd and Alex Bolam which meant they added a further 12 points to the home tally.

Josh Bayliss and Rachel Hill stepped in from the Harrogate One team and played at three. However Ashcroft and Todd proved too canny for them and won comfortably. However the duo had a positive 8-4 success over Bolam and Todd but were just touched off 5-7 against the Hubble’s, who playing at three for the visitors, were pretty strong and arguably well above average for this position.

Overall and in a tight contest the visitors just edged the match winning 50-58 and on the night were worthy winners adopting good tactics and playing street wise tennis. Congratulation’s to Dunnington and good luck next season in the top flight.

For Wetherby it has been a fantastic season in Division Two and to keep promotion hopes alive right to the final game, despite been without key members during the campaign, was a fine achievement. They can look forward to another promotion push next term if managing to keep the bulk of this squad together. 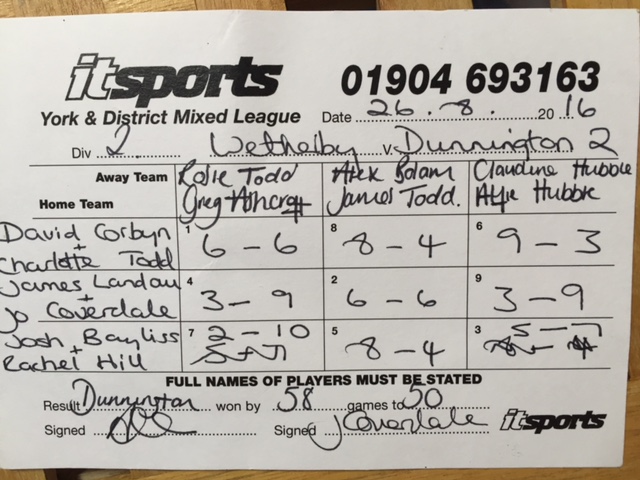