Finally a warm and pleasant evening for the much rearranged relegation decider between Burton Leonard and Wetherby B in Division Five of the Harrogate and District mixed doubles competition. Captain Barry Johnson had twice led his troops into battle only to be beaten on both occasions by the weather. Tonight the match was held at the new Harrogate Spa complex on the site of the old Harrogate Rugby Union ground . They have six floodlit courts with three of those on carpet where tonight’s duel was played out.

Wetherby were one place and one point above their hosts at start of play so in effect had to avoid defeat whilst only victory could reprieve Leonard.

Wetherby named an unchanged side from the one that was due to travel last week with Johnson playing at seed one alongside left hander Anne Lilleywhite. This is always a useful partnership and the powerful hard hitting pair overcame an opening 6-2 reverse against Bob Lockwood and Caroline Barr to comfortably win the next 1-6 to start with a share of the spoils. On Court Two Greg Vince, now recovered from injury and who has been recording some impressive results in the club events and on the social circuit, was joined by reserve of the year Janine Smith. Smith played an instrimental role in helping the Ladies second team to promotion and has been called upon several times in the same capacity by Johnson for the mixed team this term too. They are starting to form a useful partnership now but had to recover from a first set 6-3 defeat to John Crowther and Liz Parker to force a tie following a 4-6 second set success.

Court three saw veteran’s Walter Skubiak and Ann Jones in action. Another pair who have played many times before during their long and distinguished tennis careers, their invaluable experience would be extremely useful on this occasion. They began with a draw as well having won the opener 5-6 but fell in the second 6-2 against Robbie Barr and Rosie Ellerby.

Round one closed with the match finely poised at 1.5 v 1.5 and all to play for.

This encounter would now be decided on who best held their nerve . Captain Johnson was certainly showing none as he and Lilleywhite attacked straight from the outset against Crompton and Parker. They proved too strong for the home number two seeds winning 3-6 to edge Wetherby ahead. Vince and Smith were also on the offensive with Vince bossing the baseline and Smith the net. They were quickly out the traps to make all in a 3-6 victory over Barr and Ellerby.  Skubiak and Jones were looking calm and collective as they focused on the job in hand playing Lockwood and Barr. In an end to end encounter with no quarter given, the rubber finished all square and a share of the spoils was a fair result.

Suddenly the match had turned and Wetherby could smell blood and safety. They led 2 v 4 knowing a half was all that was needed in the final round to celebrate survival.

The visitors were now in no mood to surrender and began to turn the knife. Vince and Smith continued their memorable evening with some more impressive play to quickly wrap up victory with another 3-6 success over Lockwood and Barr. Johnson and Lilleywhite were involved in a titanic struggle before taking a half from a very hard fought 6-6 tie with Barr and Ellerby whilst it was no surprise that Skubiak and Jones were fighting tooth and nail before finally securing another half from a 6-6 tie themselves with Lockwood and Caroline Barr.

And so at the end a richly reserved 3-6 victory was posted by Wetherby to ensure another season of Division Five mixed doubles at Castlegarth. A big congratulations on a great achievement for a side who defied the odds to stay up. Commiserations to Burton Leonard in a game that was played in an excellent spirit. Good luck with your quest to make a quick return next term.

A special thanks to league secretary Carolyn Rothwell who organised the game and to Spa Tennis club for allowing this final game of the campaign at their home. Spa have a lovely set up and both our Wetherby teams look forward to returning here next season. Spa gained promotion from League Six with an unbeaten record and judging by some of the team and individual scores recorded look early favourites for the title already!!

Well done to all the players who represented Wetherby B this season but especially to the gallant six this evening who were a credit to themselves and the club. 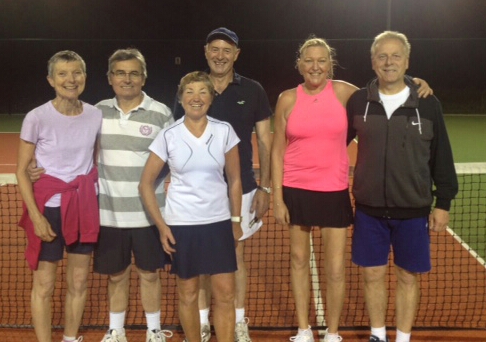 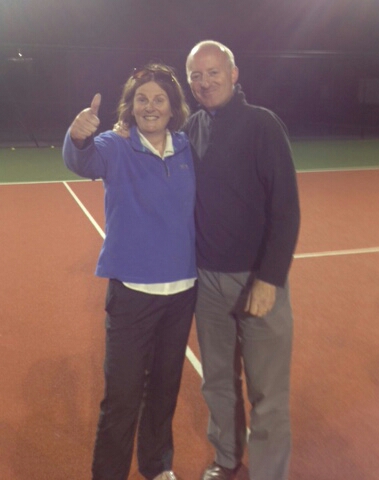 Not forgetting the fans with chairman Steve Jones and wife Dee supporting from the side lines!