The Wetherby men’s first team had already been crowned champions and will be promoted to Division Three next term. Today they hosted Rufforth at Castlegarth looking to complete a clean sweep of victories to put the icing on the cake of a truly wonderful campaign.

With Mike Butterworth currently touring Europe and Nigel Williams continuing with his major gardening project, the team selected itself.

The major news this week had been the removal of Cliffe by the league committee after they had failed to fulfil a fixture for the fourth time this season. This had crucial and major implications on the relegation battle with Rufforth, Strensall and Wetherby 2 now in a three way battle to avoid joining the already doomed Sheriff Hutton.

So Wetherby One were in a position to assist the second team and they didn’t disappoint. Captain Roger Fawcus teamed up with Jeremy Reddish at seed one and the power and strength from the duo was fair too classy for the Rufforth chaps.They won all three rubbers and collected 25 points in an impressive display.

James Landau and Steve Jones are a very dependable pair and both cool customers. Rarely phased, they went about business in clinical fashion and in winning their three rubbers also collected 25 points along the way.

Big hitting duo Rob Payne and Paul Godden are a fierce site for opposition players and this couple never take a backward step. They were well on their way to three wins themselves and topping the morning scoring charts before an unfortunate arm injury suffered by Payne meant they lost to the Rufforth first pair. They still finished the session with 25 points so a rare site on the scorecard of all three couples winning 25-11 was recorded which gave the champions victory by 75-33 and an overall win of 11-1.

A truly fantastic effort by the first team this term in winning every game and they can now look forward to testing themselves in Division Three next season. Well done to everyone who assisted this season.

That thrashing of Rufforth meant they were now deeply involved in the relegation battle and would be nervously looking for results elsewhere to avoid the drop. Wetherby Second team had certainly benefited from the demise of Cliffe having lost to that outfit earlier in the campaign. They therefore were left in a much healthier position once the table was updated. They crucially now had a 3 point lead over Strensall and knew safety was very much in their own hands. The fixture list was kind too with their final game been a trip to relegated Sheriff Hutton. The good news didn’t last there either as before a ball was played in anger the hosts had to forfeit an entire round due to injury and Wetherby were able to claim 36 games from the outset.

Once the game began Wetherby were in no mood not to take full advantage of these gifts and Mike Connolly and Nick Lumb started well playing together at seed one. They picked up a couple of 3-9 wins to claim 18 points and put Wetherby almost in sight of the winning post. Marc Bickers and Josh Bayliss partnered up at seed 2 and these Harrogate mixed first team men also won both their rubbers to post a final tally of 15 points.

Captain Mike Park was happy to play at seed 3 alongside usual partner Ollie Boyes Park and although they couldn’t perhaps produce the tennis that had seen them be extremely consistent this season, they managed a win and a draw to accumulate another 15 points into the bulging kitty.

A final winning scoreline of 24-84 resulted in a match score of 0.5 v 11.5 and the team were able to officially celebrate the great escape.

Elsewhere, despite a gallant effort by Strensall that saw them only lose 56-52 away at runners up Wilberfoss,they lost the match 7.5 v 4.5 which left them agonisingly 2 points short of Rufforth who were able to take a big sigh of relief at joining Wetherby in safety.

So a dramatic relegation dogfight came to an exciting climax but Wetherby 2 can be rightly proud of their fantastic achievement in a tough section. Well done to all who wore the shirt with pride this term and good luck in mounting a promotion bid next season 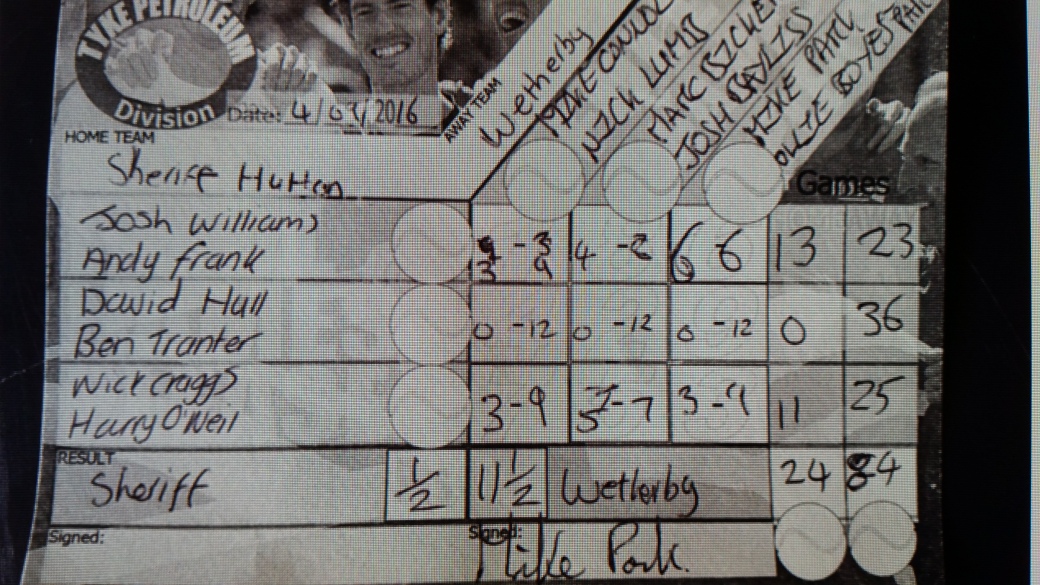