Tadcaster and Wetherby 1 met on Tuesday night in the Winter League. A lovely dry and mild evening greeted the players on arrival at Castlegarth where Tadcaster were looking to complete the double over Wetherby after beating their second team 38-34 in a thriller recently. Crucially though Taddy were missing star man Brent Horner who had helped engineer that tremendous win and he was going to be a big character to replace.

Wetherby were down as the visiting team for this fixture and selected Josh Bayliss to partner captain for the evening Debbie Vines with Ann Jones and Sam Moore joining forces.

Bayliss needs little introduction to these pages and the youngster is proving to be one of the clubs shining lights. Debbie Vines, who captains the Wetherby mixed team in the York league, would prove an excellent partner this evening as she posts a strong forehand and an excellent ability to maintain rallies. Bayliss was able to benefit on many occasions as he dominated the net and also produced some breath taking drop shorts to boot during the duo’s opening rubber against Tadcaster captain Sandra Levitt and Lindsay Edgar. Levitt is a strong player herself and with Edgar a wily fox they certainly didn’t go down without a fight.However Wetherby ultimately proved too strong with Bayliss and Vines running out eventual winners 2-10 to give the visitors an excellent start.

Sam Moore was making his debut in the Winter League alongside the vastly experienced Ann Jones. Jones played a crucial role in ensuring Wetherby B avoided relegation from Harrogate League five this term and despite a small frame has a hugh heart. She would prove the ideal partner for young Moore who has come through the junior ranks and is a part of the all conquering Under 16 side that is very strong at junior level. He also played in the men’s third team last season and is certainly an excellent prospect. Moore is an excellent server, aggressive baseliner and good court coverer and with Jones tough to pass and continuing to return relentlessly the duo certainly looked a great combination. For Tadcaster PE Teacher at Ripon Grammar Adam Milner certainly looked the part and his fitness could not be questioned as he covered every inch of the court. Partner Maureen Fairbairn battled on gamely but despite those best efforts by the hosts Wetherby produced another comfortable victory in running out cosy 1-11 winners.

So as round one concluded Wetherby had built a strong foundation which would set them up for victory.

Bayliss and Moore teamed up in the men’s rubber as they have done on many occasions on the junior circuit and these good buddies off the park were soon into their stride. However Taddy pair Edgar and Milner were in no mood to surrender and gave their younger opponents a good workout. There were some tremendous rallies on show with every point had fought before the favourites did oblige 4-8.

Debbie Vines and Ann Jones formed a very experienced pairing for Wetherby in the ladies match and nothing much phases this battle hardened pair nowadays. However Levitt and Fairbairn were quickly out of the traps for the hosts and led 2-0. However with Vines and Jones soon realising they needed to adopt their usual game plan of keeping the ball in play, they began to wear down their opponents. Vines was returning with venom and with Jones creating some wonderful angles Wetherby reeled off 10 games on the spin to win 2-10.

With the victory assured the last round began but Wetherby were still turning on the style with Bayliss and Vines looking particularly impressive once more. Vines was loving the luxury afforded playing with such a consistent and free flowing partner and between them they maintained some excellent tennis throughout to wrap up a 2-10 win.

The final game of the night however was proving to be the closest and fair play to Tadcaster duo Sandra Levitt and Lindsay Edgar for really turning the screw with some impressive tennis. They more than matched Jones and Moore who, perhaps took their foot off the gas to leave the door slightly ajar. After a great match the hosts came through 7-5 which was just reward for such a game effort by Tadcaster. It was no disgrace in defeat for the Wetherby couple who had played well and their earlier efforts had been more than enough to secure a Wetherby win of 18-54.

A really pleasant evening and a contest played with smiles and good grace throughout  with the added benefit of the mild weather meant a happy evening for all concerned.

A really good team effort for Wetherby with all the quartet playing influential roles. A special mention for captain Debbie Vines who endured a troubled injury ragged season during the Summer. It was great to see her back to somewhere near her best form and her record for the evening of 30-6 meant she took man of the match honours. Thanks to everyone for their contributions this evening and good luck to the gallant runners up in the remainder of their campaign.

Wetherby 1 move up to second place following successive victories although they will be hard pressed to overtake runaway leaders Rufforth with just two games to play in 2017. At this stage unbeaten pair Rufforth and Boroughbridge look likely to battle for the title with Boro looking to close the gap at the top to two points when they face Starbeck next Tuesday. 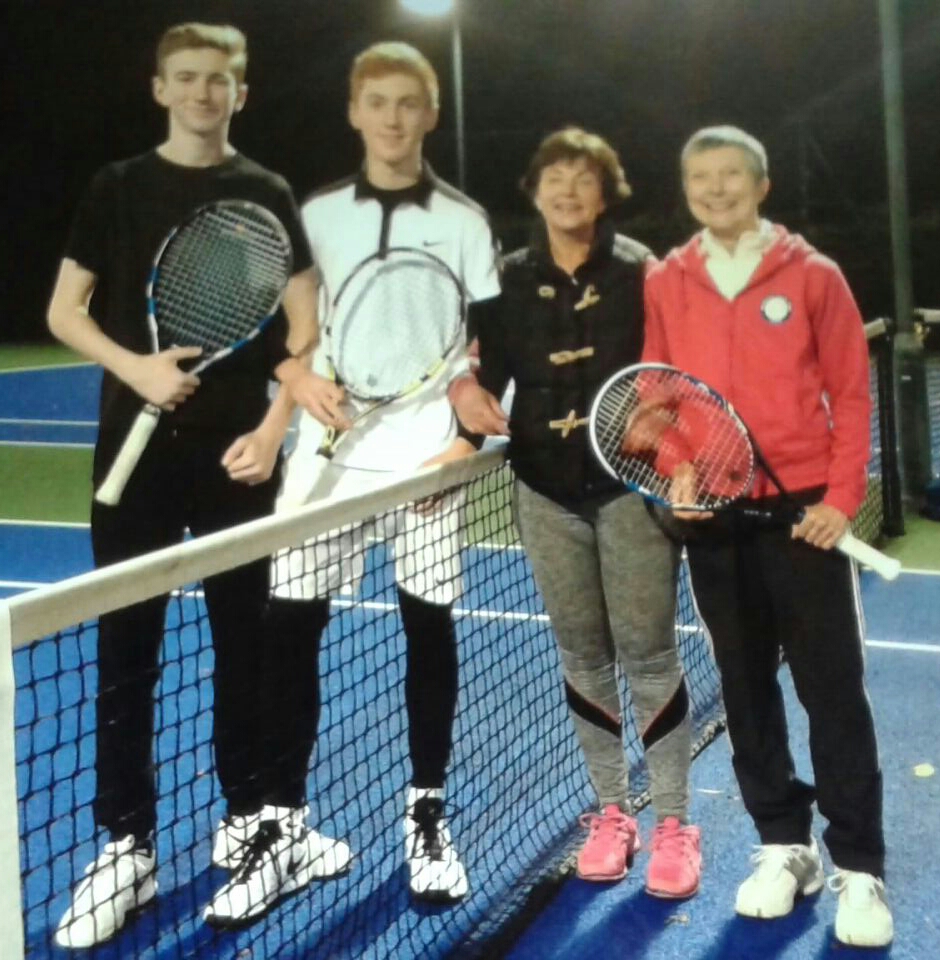 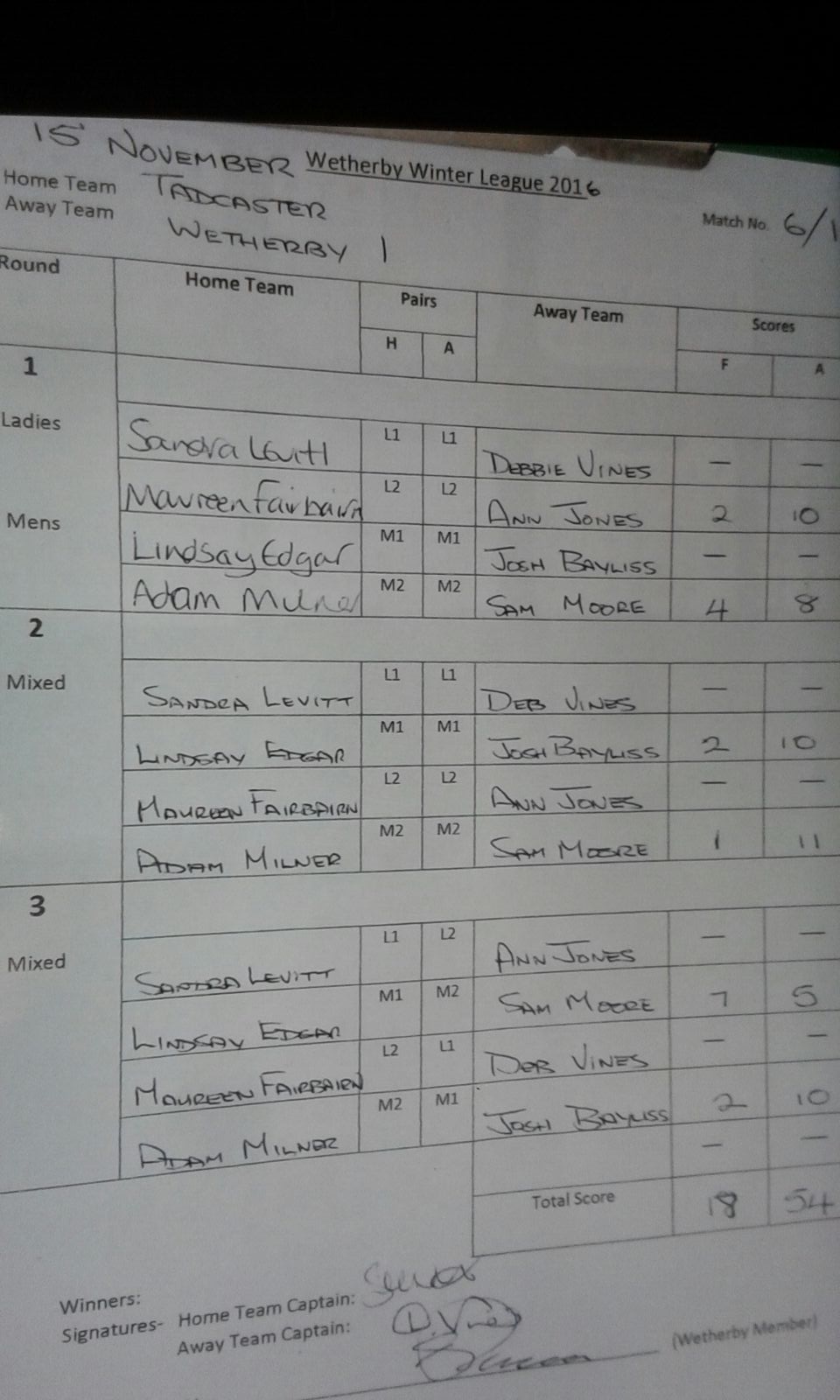