The Ladies First team continued their impressive start to the season when winning 66-42 away at Poppleton this morning. After a great win over Fulford last week the ladies travelled North in confident mood looking to maintain the pressure at the top after promotion last term.

Sue Jacklin and Rachel Hill, who had been top scorers last week, once again teamed up here. They couldn’t reproduce last week’s heroics but two wins and a loss from their three rubbers meant a useful 19 points were secured and kept the visitors just ahead on the scoreboard. Helen Robinson and Sue Perkins also resumed together and were involved in some exciting and close games which could have gone either way. In the end the girls battled hard to achieve an excellent 20 points from two narrow 5-7 wins and a 6-6 draw showing great tenacity throughout.

However on this occasion pride of place went to Angela Crossley and Lucy Wright who had replaced Charlotte Todd and Yvonne Mannall from the week before. Crossley had suffered an injury hit campaign last year but was looking much fitter for her seasonal bow whilst Wright had enjoyed a good workout Thursday during a narrow loss for the Harrogate mixed one team so was looking forward to continuing her comeback from pre season injury herself. The pair quickly gelled and were to produce some wonderful controlled tennis. These two big hitting and competitive players were in no mood to allow the hosts any sort of chance and recorded a very impressive 27 points in the session which included a 12-0 drubbing of the Poppleton third pair.

A great team performance ensured Wetherby maintained their 100% start to this season and sends a strong message that they are certainly not here just to make up the numbers and will be a force to be reckoned with this term.

Well done to all and the team are next in action back at Castlegarth next Saturday when title favourites York 1 are the visitors. This will be a significant step up in class as York are the current champions and won all 14 league games during that title charge last year! 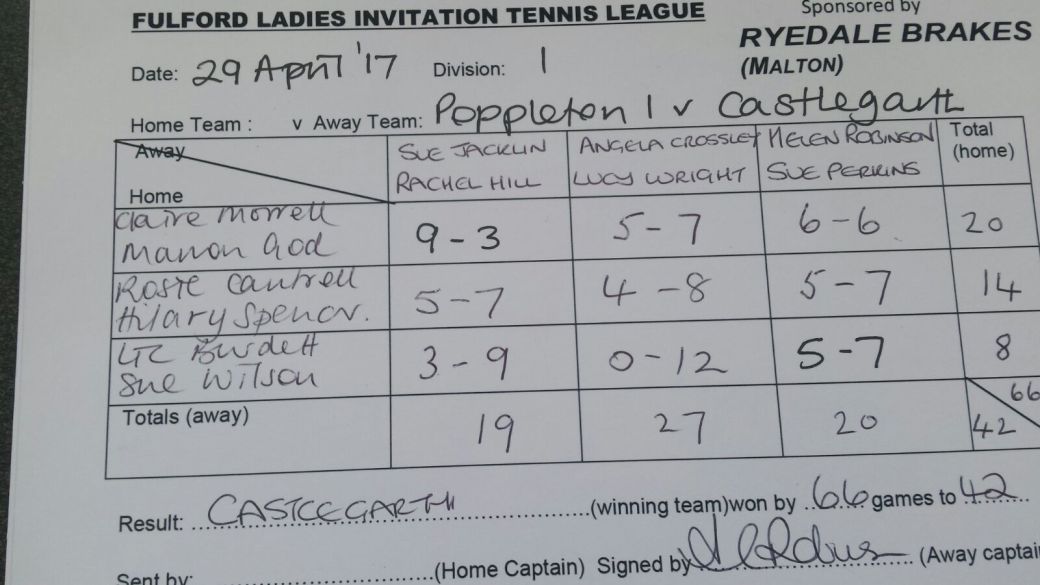 Not to be outdone and later in the afternoon ,Fiona Chantrey led her Ladies second team into battle against Starbeck. The girls had found David Lloyd too hot to handle last week but were confident of putting that defeat behind them today. Starbeck arrived following relegation last year and a narrow opening day loss at Wistow but were able to pick on paper a useful looking side. In fact Simone Carrick and Katie Draper had helped the Starbeck mixed team to victory at Wetherby on Thursday when they both played extremley well.

Trish and Angie Bell had been highest scorers in defeat last week and were once again in good form. They played an aggressive style to counter the hosts strong line up and managed a very creditable 6-6 draw with Carrick and Diana Lang, who is a very competent player used to playing at a high level. A 7-5 success over Draper and Ali White, who is returning from a long injury herself, meant they were in a strong position to take points off the third couple and Lizzie Rigby and Karen Corcoran were duly despatched 10-2. This gave Wetherby an excellent 20 point return in a match that always promised to be a tight affair.

Fiona Chantrey and Marise Richfield also continued their partnership from last week and although this duo found the going hard in losing two rubbers 4-8, they managed an 8-4 success in the other game to add another valuable 16 points to the hosts tally.

In an unchanged line up from their first game Rachel Butterworth played with Ginny Hinds who again stepped up from the subs bench with injury and holiday commitments still meaning players were absent. Tonic, as she is affectionately nicknamed, was certainly enjoying the action and after familiarising herself to the standard recently, proved a force to be reckoned with today. Alongside Butterworth, they showed great understanding and good team work to draw 6-6 with Lang and Carrick and despite a narrow 5-7 loss against White and Draper, a 10-2 success against Rigby and Corcoran meant a more than creditable 21 points in the bag.

Ultimately a battling Wetherby eventually ran out 60-48 winners to record a first success of the campaign. Well done to all involved today and next week the ladies travel to Dunnington for a rare Sunday encounter with a 1pm start time.