Three of our mixed teams were in action this evening on a busy night of local tennis in the various leagues. The York 1 mixed outfit began their campaign with a home clash with Bubwith at Castlegarth. Wetherby had been in the promotion mix from Division Two 12 months ago and just got pipped by Dunnington in the end. They are sure to be in the mix again along with tonight’s visitors who had finished a place and a solitary point behind them last term.

Wetherby selected from strength although with Steve Jones and Jeremy Reddish absent, David Woon came off the bench to partner Becky Jones. Jones is a new addition to the squad this term but was soon into her stride playing some excellent ground strokes and maintaining a good court coverage. Partner Woon is also an impressive individual with a number of weapons to his bow. This duo in all honesty looked a class above and recorded a fantastic 29 points on the evening including two rubbers by 11-1!

That excellent contribution put Wetherby firmly in the driving seat and captain Angela Crossley was in no mood to let up as she and partner David Corbyn took to the court. Crossley has made a good start to the season helping the ladies first team to success at the weekend when she bagged 27 points. She once again looked impressive alongside the useful left hander Corbyn who demonstrated some lovely ground strokes and effective net play. They were ultimately pleased to manage two wins,7-5 and 8-4, to go with a 6-6 draw against a strong visiting team who ensured all three rubbers were closely fought and added another 21 points to the hosts tally.

Yvonne Mannall was joined by Josh Bayliss who has stepped up from Harrogate 1 this year. The youngster was still on a high after securing a fantastic third place in a junior tournament held recently at Nottingham where he defied the odds to take the bronze. He and Mannall played well together here and the duo were also involved in three extremely tight battles. They finished their evening all square after a 7-5 win and a 5-7 loss in addition to a 6-6 draw meant another useful 18 points in the Wetherby kitty.

This all meant Wetherby opened their campaign with a 68-40 success which puts them top of the league!!. This promises to be a tight section and next Wednesday the team are back in action at Poppleton who finished four points adrift last season. Good luck there and let’s hope for another promotion assault this year. 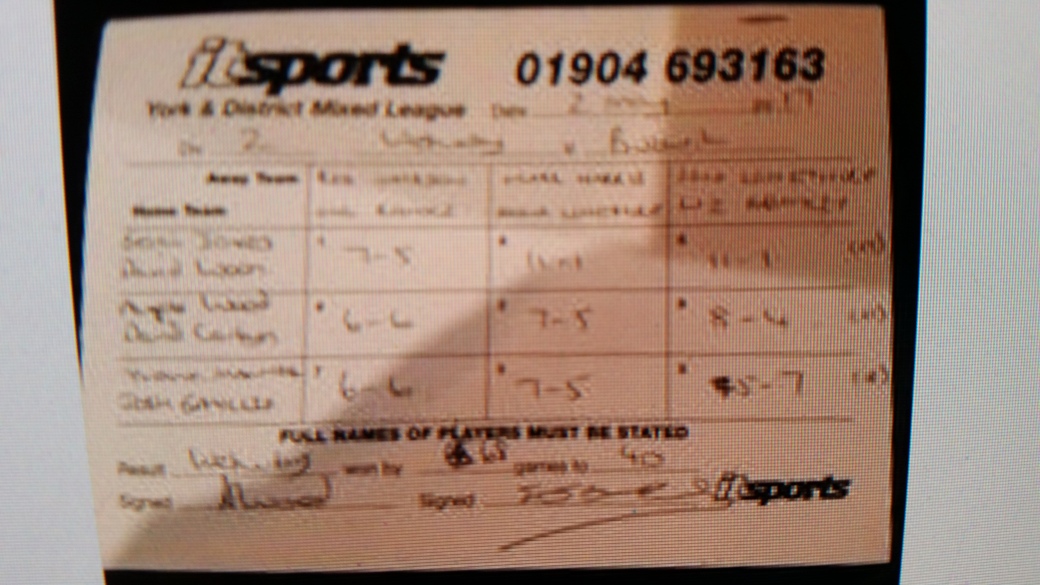 Harrogate 1 travelled to local rivals but firm friends Boston Spa for what promised to be an exciting local derby clash. It was hoped after a relatively sunny day that those conditions would continue but a cool breeze kept temperatures on the chilly side. The visitors were without Mike Butterworth and Nigel Williams and with Bayliss now in York 1, it meant new faces were needed to boost the ranks

Newcomer Paul Archer continued alongside Rachel Hill and they were to endure what perhaps turned out to be a frustrating evening for the pair. They opened up with a battling 6-6 draw and following an incredible 1-11 success hopes were high but they fell to a 9-3 loss in their final rubber when a long wait did not help the couple. However a useful 20 points were accumulated to the Wetherby score which kept the team firmly in the hunt.

Marc Bickers teamed up with Helen Robinson who was certainly at home as she lives in the village!. This couple are always involved in some tight affairs and this evening was no different as they finished with two 6-6 draws and a narrow 7-5 reverse. Robinson used the carpet surface to good effect with her tidy and accurate backhand whilst Bickers in his all action style covered every inch of the park to score 17 much appreciated points .

Captain Sue Jacklin teamed up with Ollie Boyes Park who has played regularly for York 2 over the past couple of seasons. The classic play from the left handed Jacklin coupled with an all energy lung busting performance from Park meant the pair remained competitive throughout as they were unlucky to be on the wrong end of two narrow losses and a 6-6 draw to reach 15 points.

Unfortunately the team came up just short with Boston running out narrow winners 56-52. Well done to both teams for producing an entertaining match and good luck with the season. Wetherby are next in action a week on Thursday when Boroughbridge A are the visitors to Scott Lane and with the teams finishing level last season another close battle is on the cards. 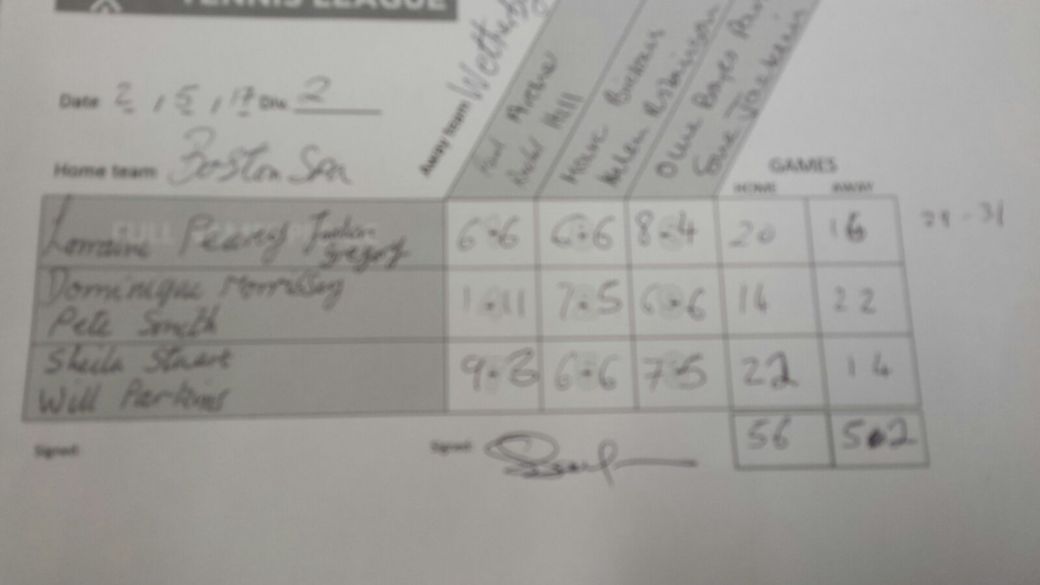 News was eagerly awaited from the picturesque village of Burton Leonard where Ian Teasdale had led his Wetherby B troops into battle this evening. With no phone reception it was a while before a scorecard emerged but the wait was worth it after the team surprised the oddsmakers to record a surprise and welcome win.

Wetherby had lost their season opener with Wetherby A in a game where they cause was severely hindered after the loss to injury of Anne Lillywhite and the concession of 27 points. Lillywhite was missing tonight so Janine Smith kindly stepped in off the reserve list for the journey north. Captain Teasdale is an astute tactical leader and juggled his pairs effectively to ensure his players produced the goods. The hosts had opened with an eye catching success at Harrogate Racquets and were looking to go top of the league. However they were missing three members of that side including the impressive Angela Crawshaw who had contributed a 27 point haul in that victory. When the teams were announced Wetherby scented blood and Walter Skubiak and Janine Smith quickly set about their opponants. This fiercely competitive duo proved to be an excellent partnership with the baseline dominance of Skubiak and the controlled net play of Smith proving a lethal combination. They opened up with a narrow 5-7 success over Bob Lockwood and Rosie Nelson before really turning on the style to thump John Crompton and Caroline Barr 2-10 before finishing with a 3-5 win over Nick and Becky Coates. With Burton Leonard not having floodlights this contest was played 12-12-8 . The Wetherby number one seeds recorded a superb 22 points to give the team a lift.

Ian Teasdale and Katy Barrett had produced some good tennis for the A team last year including a good effort in victory at Burton. They found the going harder this term but battled gamely to ensure they scored well and maintained the visitors momentum. Despite a 6-6 tie and two defeats they added a crucial 14 points which kept the team on track.

David Rhodes came in for his seasonal bow and teamed up with Ann Jones with both boosting a wealth of experience. This unorthodox pair would certainly keep the hosts on their toes and both produced some lovely error free tennis to frustrate their opponents. Rhodes has a useful and potent backhand which he used to full effect and with the wily Jones taking the pace off beautifully they were certainly enjoying themselves despite the weather turning windy and cold. They managed a 5-7 win, a 5-3 loss and a 6-6 draw to reach 16 points which meant Wetherby returned South with a 44-52 victory.

Once again Burton Leonard provided an excellent feast at the local pub which rounded off a pleasant and rewarding evening.

Well done Wetherby and in Ian Teasdale, if there was a prize for the clearest and neatest scorecards he would be top of the league, excellent work as always Ian!. The team make a quick return to action when they entertain Ripon B this Sunday at 5pm following the Great British tennis weekend event. Hopefully both occasions will be well supported . 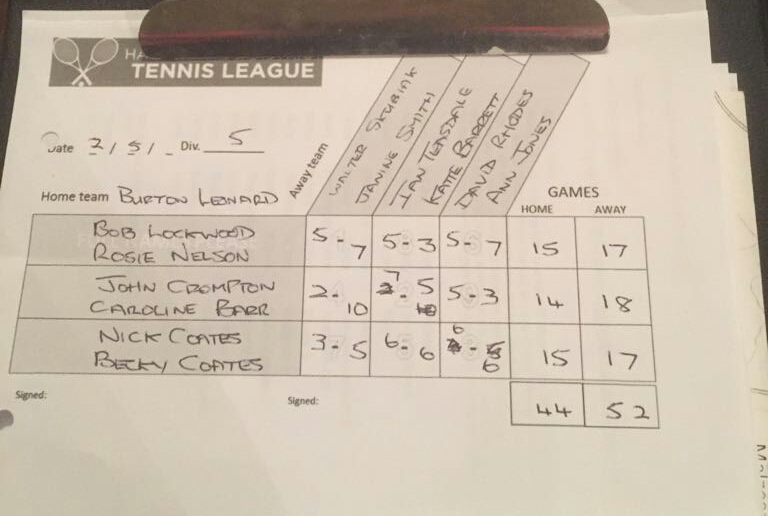 Captain Jill Abel took her York 2 mixed team over to Copmanthorpe on Wednesday and it was a real family affair with Mike and Emma meaning half the squad were from the same family!. The squad had enjoyed a good pre season training preparation but suffered a blow when the experienced Mike Connolly was forced to withdraw after a change in work circumstances. This was offset with the welcome news that Angie Bell was returning following a season out with injury although she missed tonight’s trip along with Trish Bell and Rachel Butterworth who were also absent.

Copmanthorpe had suffered a terrible season last year when they were relegated from Division Three without recording a single win and even ended up on -1 point after off the field problems too. However in Johnney Kay they have unearthed a superstar of the future and this young man was to prove a class apart on an otherwise very evenly contested battle.

Kay and partner Laura Simpson were however in irresistible form as they blew their Wetherby opponents off court. They eventually record an unbelievable 32-4 winning  scoreline after a 12-0 and a couple of 10-2 victories put the hosts in control.

Mike and Emma Abel had suffered one of those 10-2 reverses but this father and daughter combination soon fought back to play some excellent tennis of their own in the remaining two rubbers. They beat useful Thorpe pair Graeme Byzhen and Jane Harding 4-8 before piling on the points themselves to defeat Graham Garbutt and Ms Scott 2-10. Under the circumstances a 20 points haul was more than respectable and well earned.

Jill took to the courts with Kevin Duckenfield who has stepped up from the Wetherby A team in the Harrogate League. He may have wished he hadn’t after been on the receiving end of a Jonney Kay super show but after a 10-2 loss there this experienced duo fought exceptionally well to record a 5-7 win over Byzhen and Harding and a honourable 6-6 draw with Garbutt and Scott. They finished their seasonal bow with another 15 points in the visitors kitty.

With three ladies missing Dee Nolan kindly stepped in to partner debutant Sam Moore. Nolan was still on a high after winning the Wetherby Sunday social event last weekend but as they say in sport, you’re only as good as your last performance, and unfortunately Mr Kay soon saw that she was quickly brought back down to earth!. Young Sam Moore has been the mainstay of the junior scene at the club and played in the men’s third team last year. He is improving each season and this hard hitter will be a welcome addition to the team. In fairness they fought valiantly under pressure against the home top seeds and a 12-0 reverse was harsh after a number of tight games and endless deuces. They would have enjoyed their other two rubbers which sadly went the way of the hosts 8-4 and 7-5 but at least they contributed a further 9 points to the Wetherby haul.

Unfortunately this really was a one man show and Kay ensured Copmanthorpe finally ran out winners 64-44 on the evening. Take him out of the side and this match would have been extremely close so at least Wetherby can take away many positives from the evening. The contest was played in a good spirit in pleasant conditions and each pairing could draw on useful moments.

The team are back in action on home soil next Tuesday May 9th when the visitors to Scott Lane will be Appleton Roebuck. They too suffered relegation alongside Copmanthorpe but did manage four wins so are set to provide stern opposition once more. Well played to everyone tonight and good luck next week and for the remainder of the season. 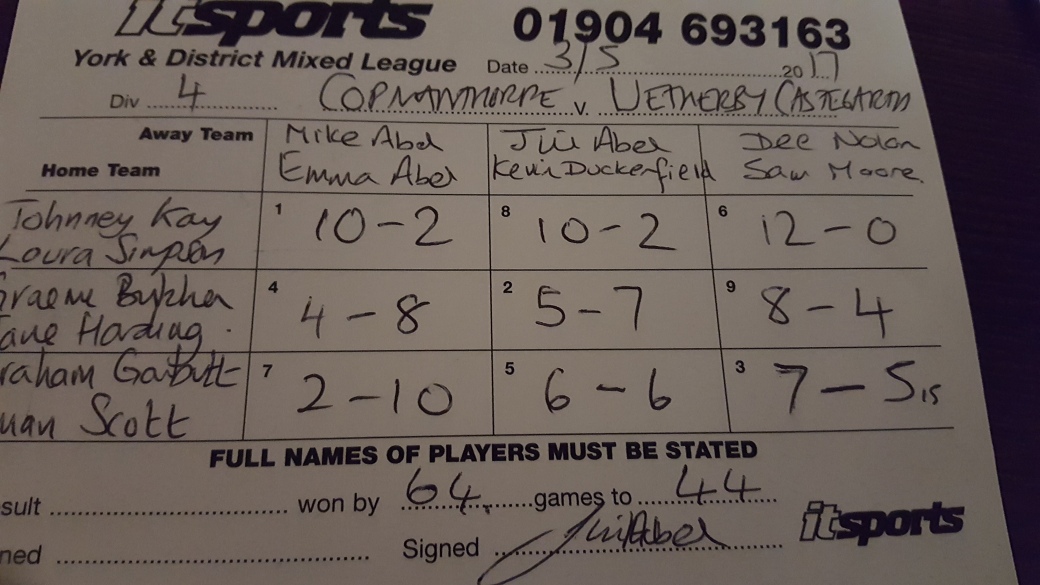