The Ladies Second team were in action this afternoon as they welcomed local rivals Boston Spa to Castlegarth. Both teams had won just the once from their opening three games so this was a crucial contest. Wetherby led by captain Fiona Chantrey picked from strength but the visitors looked strong too so a fascinating battle was promised. A warm and sunny afternoon welcomed the players as they began this Division Two encounter.

Trish and Angie Bell opened up playing seed one and they took on Lesley Haley and Lorraine Pearey for Spa. This proved to be an excellent and close contest. With Angie playing a strong baseline game and Trish dominant at the net the good team work from the Bells ensured the visitors were never able to settle. Finally Wetherby were able to close out the game 7-5 . Captain Chantrey teamed up with her old partner in crime Jill Abel, who was still on a high after helping the York 1 mixed team to a midweek success. This experienced duo are thoroughly professional on court but would have a tough battle against Spa opponents Lucy Milne and Dominique Morrissey. Once again it was hard to split the pairs and with Chantrey keeping many rallies alive with her excellent baseline coverage and Abel happy to patrol the net honours were finally shared following a 6-6 draw.

Rachel Butterworth and Louise Williams were the Wetherby third seeds today and you will struggle to find a happier and more polite duo in the league. Both wearing their usual wide smiles they took on the wily Margaret Lindley and Sue Watson. Both Wetherby ladies have excellent baseline shots and put the Spa duo under constant pressure with some hard hitting. With the visitors equal to the task and scrambling well the tie looked well balanced. However Wetherby were determined to force a win and they eventually were able to celebrate a useful 8-4 success.

Round Two began with the hosts ahead by 6 and leading 21-15. Trish and Angie Bell took on Lindley and Watson looking to at least emulate Butterworth and Williams score from the opening round. The Boston ladies fought well and bravely responded to everything the Bells threw at them. However the greater power of the home girls eventually ensured an 8-4 win. Chantrey and Abel took on the visitors top pair and once again fought out a very tough but entertaining battle. Close games and a number of deuces meant a long rubber before the Wetherby ladies helped themselves to another 6-6 tie.Butterworth and Williams took on Milne and Morrissey and prepared themselves for a tough contest. As with all the games played this afternoon, the action was high tempo,enthralling and tight and every point was hard earned. Unfortunately the Spa duo were too efficient and clinical and despite a brave rear guard Wetherby lost this particular rubber 4-8.

So as the crowd eagerly awaited the final round the score was 39-33 with Wetherby holding a crucial 6 point advantage. The hosts knew if they maintained the levels shown it would see them home and once again they had to dig deep to propel the Boston attacks. Angie and Trish knew the consistent Milne and Morrissey would provide stiff opposition but this rubber was arguably the one that really swung the tie the hosts way. The Bells really went through the gears after quickly leaving the gate and left their bewildered opponents chasing shadows most of the contest. A 9-3 home success was much appreciated and utterly deserved and left Wetherby very much in the driving seat.Chantrey and Abel had played very well to remain unbeaten but were keen to win their last rubber. They were afforded a little more time on this occasion and started to dictate matters with some controlled and thoughtful tennis. They were rewarded with an 8-4 win. Butterworth and Williams were enjoying the strong competition but knew they would have to produce a seasons best performance to lower the colours of Haley and Pearey. However they also knew they had the weaponry to remain competitive and test their higher rated opponents. They did indeed play well and were happy to add another 4 to the Wetherby total and despite a 4-8 reverse knew it was more than enough to guarantee victory which Wetherby achieved by 60 games to 48.

This really was a satisfying win against a very useful Spa outfit and the ability to remain focused and consistent was ultimately key to victory. Well done to all on show and thanks to our close friends down the A1 for a memorable contest. The reverse fixture will be eagerly awaited no doubt.

Wetherby are back at home again next Saturday when lowly Wistow are the visitors and Wetherby will be confident of back to back wins. 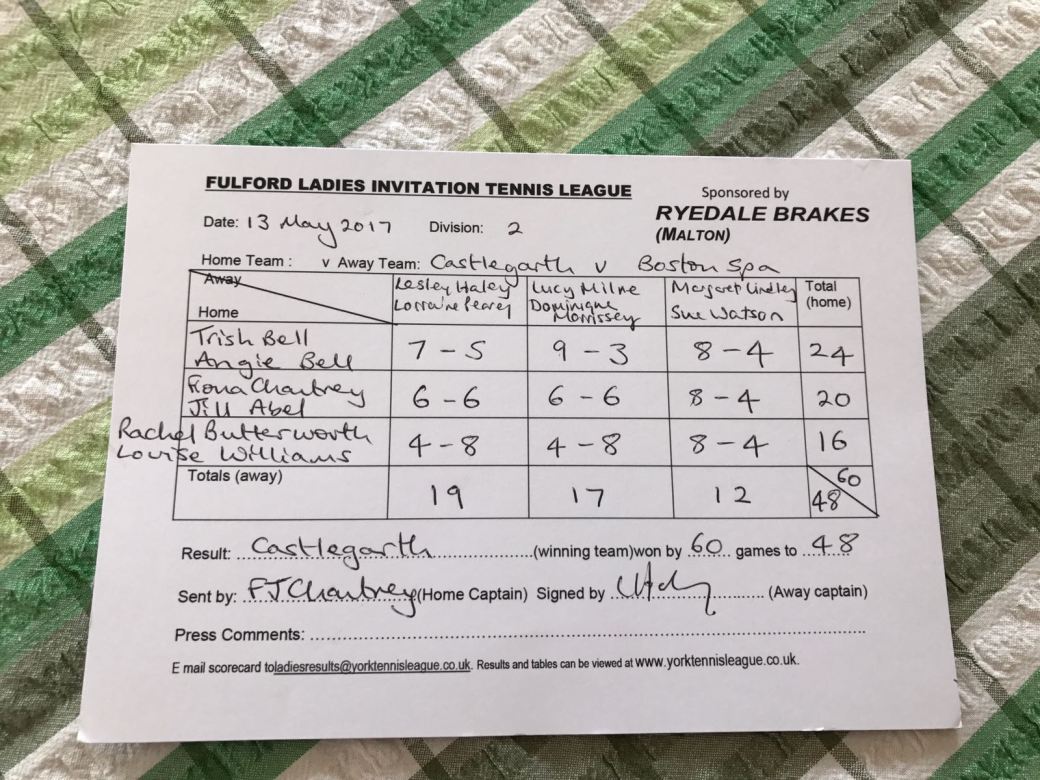