Angela Crossley took her York 1 mixed team over to York 3 tonight for a York mixed  league division 2 clash. The table toppers were unbeaten following two wins with tonight’s hosts, who avoided relegation last season on points difference, starting this term with a win and a loss.

Wetherby picked from strength with man of the moment David Woon partnering Crossley at seed one. The youngster was looking to continue a rich vein of form which he has demonstrated both in the mixed and with the men’s first team lately. This confident but level headed individual once again was soon into stride alongside the excellent Crossley, whose strong net play and positional sense meant the pair dominated the opening set together. Opponents Jack Lewis and Anne Jackson had no answer to arguably the leading couple in the section at present and they recorded a useful 1-11 start.Rachel Hill and Josh Bayliss renewed acquaintances after enjoying a highly successful season together last season in the Harrogate 1 side. They were up against Jez Catchpole and Denise Wilson and this proved to be an exciting rubber. The quartet all battled for every point available and this was always going down to the wire. Eventually the Wetherby couple held their nerve to run out narrow 5-7 winners.Ladies first team captain Yvonne Mannall paired up with Jeremy Reddish and they met Andy Potter and Caroline White. This was another close encounter with nothing between the sides. Unfortunately the York couple this time proved just a bit too canny and were winners 7-5.

However a very good opening round for the visitors had laid the foundations and leading 23-13 they had a nice 10 point cushion to protect.

Woon and Crossley were in no mood to let up and continued where they left off against the York number two seeds. Catchpole and Wilson fought hard but they couldn’t convert the chances they were handed and the Wetherby top seeds took the rubber 3-9.Hill and Bayliss were enjoying themselves back together although once again it was too close for comfort against Potter and White. Some excellent backs to the walls resistance and the ability to convert on critical points meant once again the duo took the honours 5-7.Mannall and Reddish knew they faced a battle against Lewis and Jackson who were determined to show ,despite their first round mauling, that they are a couple to be reckoned with. They bounced back admirably and as their confidence returned they ran out cosy 9-3 winners.

It was still a good round for Wetherby who extended their advantage to 42-30 with one round left.

Mannall and Reddish had not been able to reproduce their top form but were still proving competitive and were very much in their contest with Catchpole and Wilson. The York pair were a little too good but a 8-4 loss was no disgrace and kept the Wetherby scoreboard ticking over nicely.Hill and Bayliss were once again making sure their last rubber was another close one but this time they were on the wrong end of a 7-5 defeat to Lewis and Jackson but the 5 obtained was going to prove more than enough.Crossley and Woon were still maintaining a high standard and with Woon placing some excellent serves into the corners and Crossley covering the court well they once again offered little encouragement to their opponents. Potter and White were beaten 3-9 as Wetherby ran out comfortable winners on the evening 60-48.

This keeps the team at the summit with Bishopthorpe next up at Castlegarth a week today. Well done to all concerned on another good team effort. 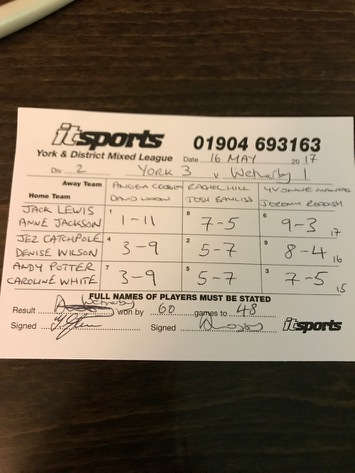 After losing at champions elect Harrogate Spa last week, Wetherby A were looking to bounce back when they visited Burton Leonard this evening. Wetherby were still handily placed in second with the hosts third, both clubs having recorded two wins and a loss this season.

Dawn Steel, Debbie Vines and Mike Richards were absent so Janine Smith stepped up from the reserves. Burton too were having team selection problems and unfortunately for them an eleventh hour withdrawal meant they had to go into the contest fielding just two pairs.

Mike Triffitt and Louise Williams were looking forward to a first ever trip to Bishop Monkton where Leonard house their third court but with only two home pairs on show this never materialised. They sat out the opening round watching eagerly from the car park as battle commenced.

Barry Johnson and Fiona Chantrey continued at seed One and they took on Carlos Horner and home captain Becky Coates on Court One. It soon became apparent that Horner was a cut above and with some booming serves, strong baseline shots which he returned with interest and the ability to dominate the net, Wetherby knew it was going to be a long night containing him. Partner Coates is also a useful player and an excellent foil for the big man and she returned well and had the ability to disguise many shots with her clever style. Despite the visitors top seeds making a fist of it they realistically had no answer and were beaten 10-2.

On Court Two Greg Vince and Janine Smith partnered up and they had been a strong pairing when playing in the Wetherby B team last season. They took on Bob Lockwood and Rosie Ellerby who are regular players for the hosts. It was a slow and error ridden start from the quartet but with Vince beginning to grind his way back with an ability to frustrate the home pair with a non stop return of shot and Smith starting to have plenty of success with her strong net play, Wetherby wore down the Leonard two. Vince and Smith ran out cosy 4-8 winners.

Williams and Triffitt then took on Horner and Coates and were to quickly made to realise the power of Horner was hard to live me. Horner has played regularly for Academy and Harlow in Division Two and with this three division drop he was clearly enjoyed the much lower standard!. However Triffitt took a step back when the giant served and was delighted to avoid been aced and generally returned well. Williams produced her customary forehand cross court shot that often had Coates floundering and even beat Horner on occasions. The visiting pair even took a 2-1 lead following a long Coates service game . They saved 10 game points before finally securing a break with their fifth attempt in a marathon game! However Horner didn’t drop serve and with him punishing both Triffitt and Williams weaker second serves the hosts began to pull clear. They were never able to dominate however and a final score line of 7-5 almost felt like a win for Wetherby as they managed to prevent a bigger winning margin.

With the concession of 36 points there was never any realistic chance that Burton could pull the tie around however. Johnson and Chantrey and moved over to Court Two to play Lockwood and Ellerby and were finding the Burton two seeds frustrating to break down. Lockwood is a crafty player with a deceptive touch and produced some lovely disguised drop shot winners whilst Ellerby was deceptively quick around the court and reached many shots that had looked beyond her. Finally Wetherby did record a 4-8 win as the persistence of Chantrey coupled with some clinical efficiency from Johnson ultimately proved too hot to handle.

Vince and Smith returned and it was their turn to face the top seeds. Horner was back to top form as he once again took control of preceding’s early doors but Vince was enjoying the baseline rallies and making the big man keep up a quick tempo. Smith had her moments too but in fairness the Burton pair were clinical and played an error free rubber to run out worthy 10-2 winners.

Triffitt and Williams were on Court Two finishing the night against Lockwood and Ellerby and after racing into a 4-1 lead had high hopes of winning well. However they became complacent and the visitors upped their game to reel off three straight wins and despite Triffitt serving well including back to back aces to go ahead 4-5,back came Burton to make it all square at 5-5 with two to play. Williams was determined to ensure she was in the winners enclosure and produced some useful cross court shots which either produced a winner or allowed Triffitt to finish at the net. Finally the Wetherby couple reproduced their earlier form to finish on a high with back to back games to run our narrow 5-7 winners which saw them finish the evening all square.

The final scorecard recorded an away win 40-68 but without those 36 freebies this would certainly have gone down to the wire. Whether a weaker third home pair could have managed to hold onto a slight lead the top two pairs had established we will never know but Wetherby will feel they would have had enough quality to cope with whatever Leonard had thrown at them.

A third win of the season takes Wetherby joint top but with Spa unlikely to lose another game in truth their realistic target is to try and claim the second promotion spot which the runners up berth affords. They will probably have to improve to challenge for that target but will be pleased with three wins from four and welcome bottom side Bedale a week on Thursday to Castlegarth looking to cement that second spot.

Well done tonight to the visitors but a big thanks to the home hospitality and the catering staff at the Royal Oak for a wonderful array of sandwiches and chips that were greatly received. Top tuna sandwiches indeed!! 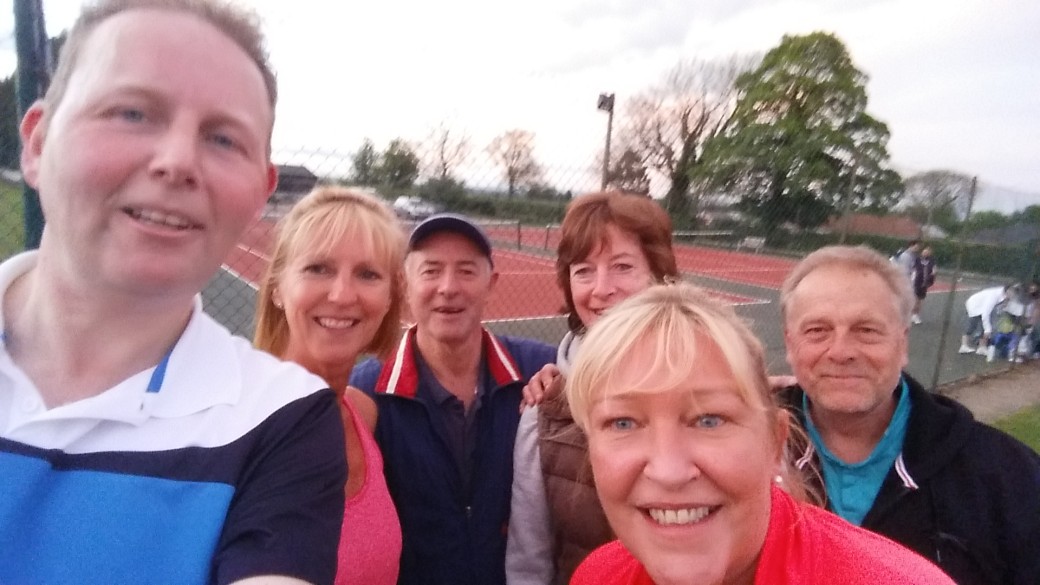 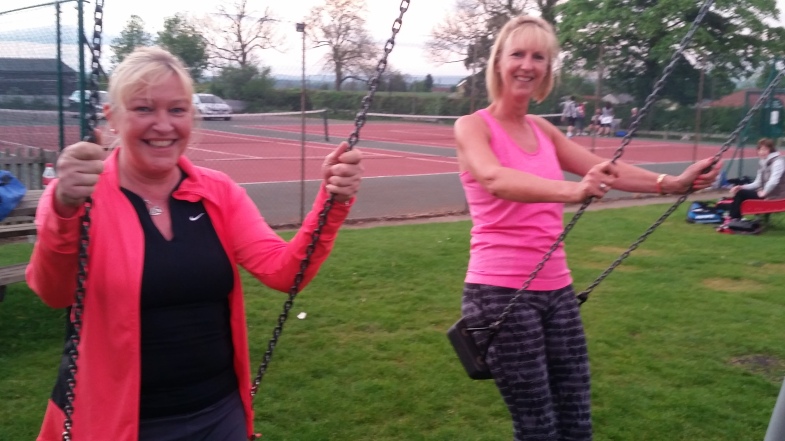 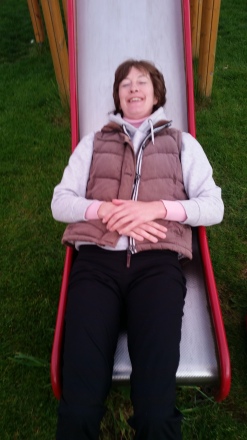 Barry Johnson filling in the scorecard whilst Fiona Chantrey takes time out relaxing on the slide and Janine Smith and Louise Williams prove you are never too old for the swings and there is a bit of child in us all!!! 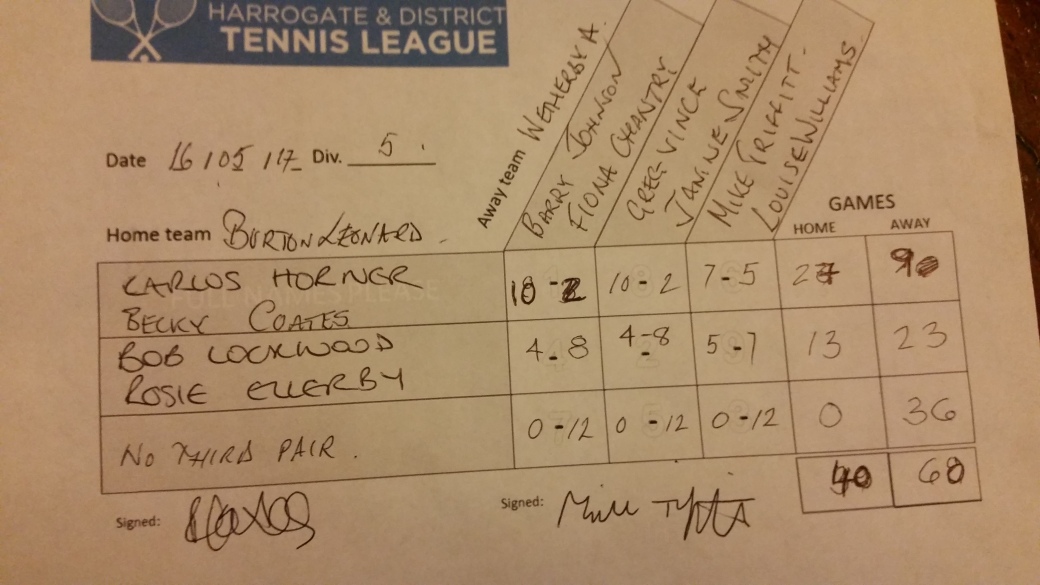 York 2 were in action when they hosted Fulford in Division Four of the York and District League. It’s been a tough start for Jill Abel and her troops and they were looking for a first success of the campaign following two defeats. However Fulford are a strong outfit and arrived as favourites.

Once again despite a lot of effort and some backs to the wall tennis, the team were unable to break down a stubborn away side who eventually ran out winners 63-45. There was a number of close rubbers but as often happens when on a losing run, many deuce games but on the crucial points the team perhaps were lacking in confidence to press home the advantage.

One of the positives over the past two weeks has been the blossoming partnership between Stuart Robinson and Angie Bell. After top scoring last week they repeated the feat here with a useful contribution of 21 points which saw them secure two wins and a draw. The side still looks competitive but in a strong section which is rather unforgiving, there are no cheap points on offer and the slightest mistake tends to get exposed and punished.

Judging from the early results and the fact only two sides remain unbeaten,it can be expected that it will be an open event this term and Wetherby have yet to face any team in the bottom half. Unfortunately the draw has been unkind and they face a trip to early leaders Riccal a week on Thursday. 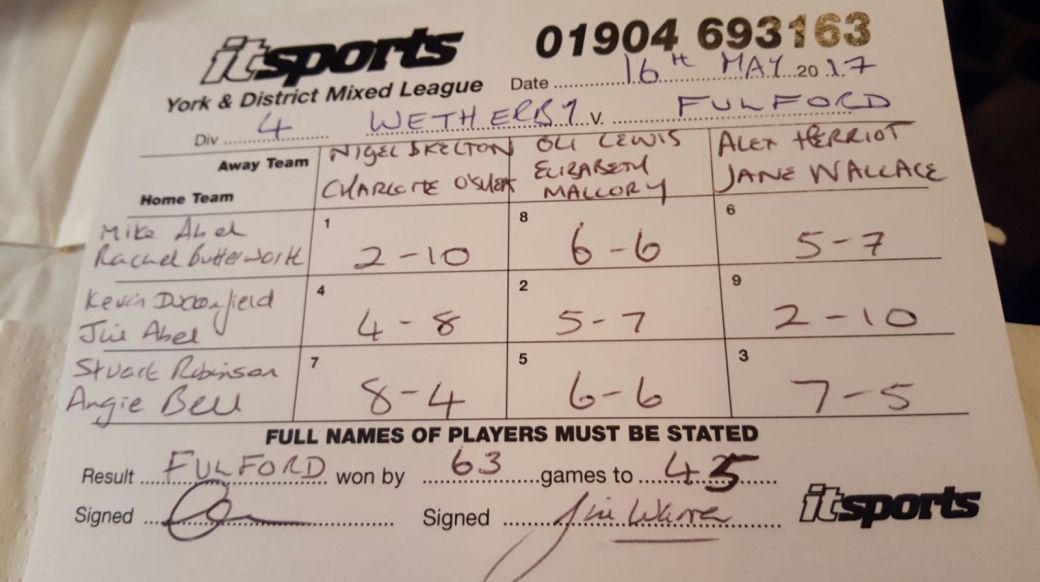