Mike Triffitt was soon dusting himself down and back in action the following day as he took his men’s third team over to Pool. The side have made a useful start with three victories and were looking to move into second place with victory at bottom Side Pool. After a lovely day of sunshine the clouds began to gather as they travelled and on arrival there was more than a hint of rain in the air.

Once again with many absentees, Nick Lumb was drafted in off the subs bench and he partnered Pete Shipston who was making his second consecutive appearance .They took on Pool captain David Broone and the younger Dan Swales. Both the home pair were above average servers and had the Wetherby men often clutching at straws. However Lumb and Shipston soon began to develop a good understanding with left hander Shipston proving an excellent foil for the big hitting and aggressive style of Lumb. The courts were playing tough with plenty of unusual bounce which made life tricky but as the Wetherby men settled they began to dominate. They ran out comfortable 3-6,3-6 winners to give the visitors a useful 0-2 lead.

Over on Court Two captain Triffitt partnered Wetherby A mixed captain Barry Johnson. Regulars on court together this pair needed no introduction and the unorthodox duo soon had their bewildered opponents in a spin. Rob Pellow was hitting the ball well whilst younger Jamie Broone was providing able assistance. However with Triffitt and Johnson difficult to read and proving the steadier pair, they began to assert. Both Wetherby men had considerable success at the net and with the famous Johnson backhand and the Triffitt lob also been used to good effect, they ran out 1-6,2-6 winners to end the first round 0-4 ahead.

The opening round had seen light rain and with the clouds darkening round two began with the wind also proving troublesome. Triffitt and Johnson were finding the going tougher against the Pool top seeds but lead 2-1 after many long rallies. However as the rain started to lash down they had little option but to take cover.

Luckily on Court One Lumb and Shipston had not been hanging around and sensing time was against them upped the tempo and moved efficiently through the gears. They led 1-5,15-40 as Shipston asked for a final point to be played. The Wetherby men wrapped up a quick fire 1-6 win and as they all took shelter in the shed knew they had achieved a winning five set success. The weather worsened and with no further play possible Wetherby did indeed gain a fourth win at 0-5 to keep them firmly in the promotion race.

Well played to all on show and perhaps especially to Shipston for quickly realising the crucial difference completing the fifth set was and also to Lumb for stepping in to greatly assist the team.

Wetherby are next in action when strugglers Alwoodly come to Castlegarth on Saturday June 24th and without counting their chickens they will be disappointed if they can’t continue the momentum then. 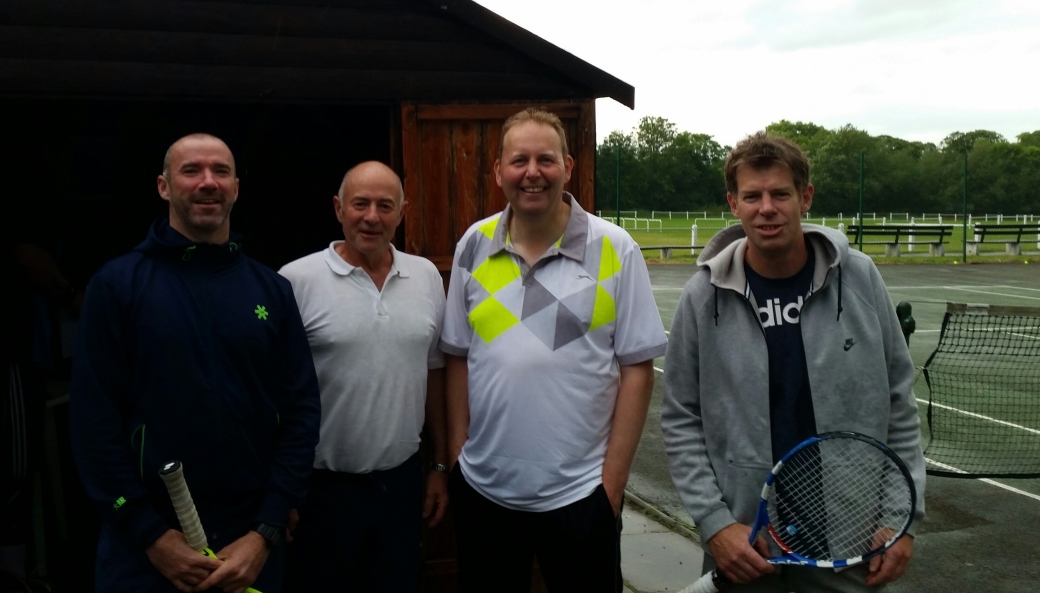 In the gloom at Pool were Pete Shipstone, Barry Johnson, Mike Triffitt and Nick Lumb 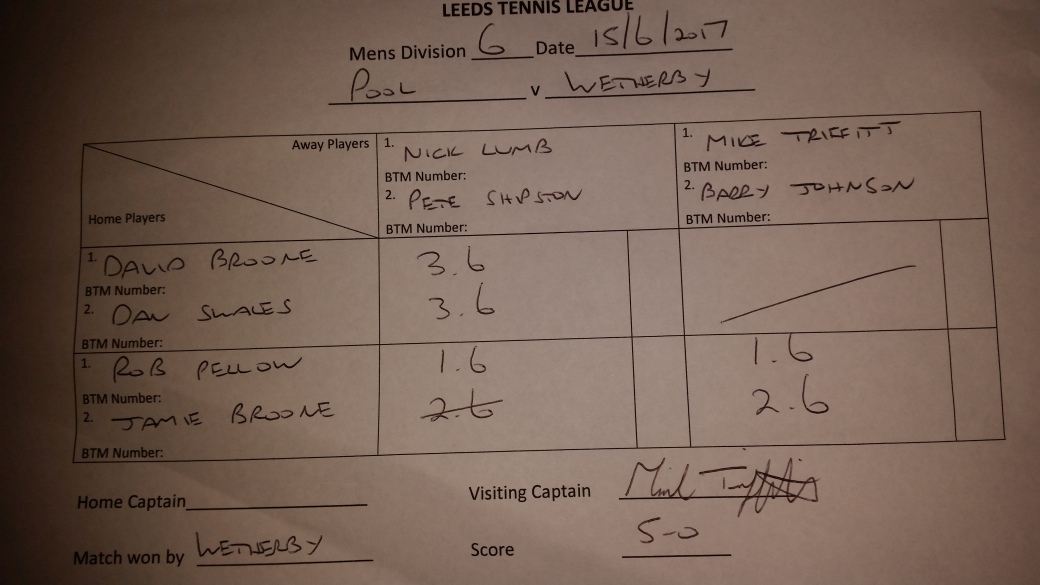