A record crowd of thirty eight gathered on a balmy Summers evening including both active current members alongside social and friends together with a contingent from Starbeck for the Annual wine evening which has been hiccupping along now for well over 20 years. 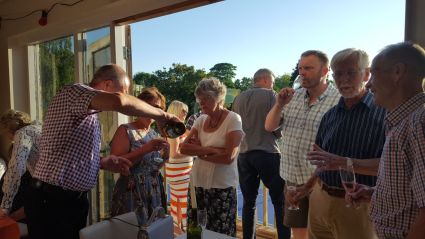 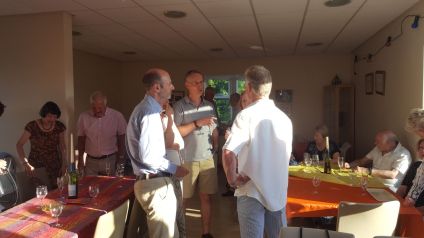 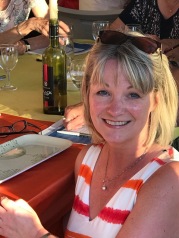 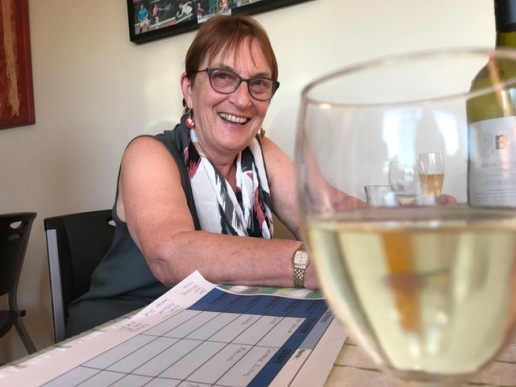 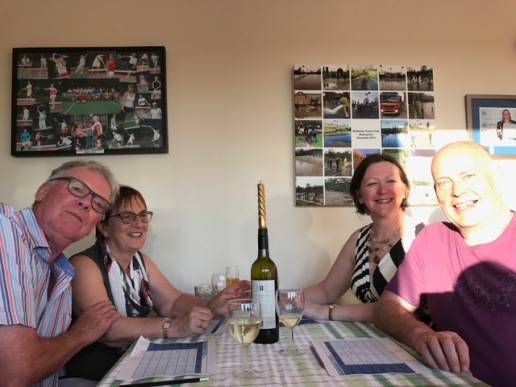 With temperatures soaring and the balcony opened, guests sipped glasses of white and rose fizz contemplating what vinous treats lay in store for them.

Master of ceremonies Doug Harrison welcomed all and barely able to conceal his excitement announced Majestic, who had supplied all the wine, were now offering a fantastic prize: namely a private wine tasting for ten people with eight different wines including champagne followed by food. With such a quality prize at stake answer papers would be exchanged before marking! 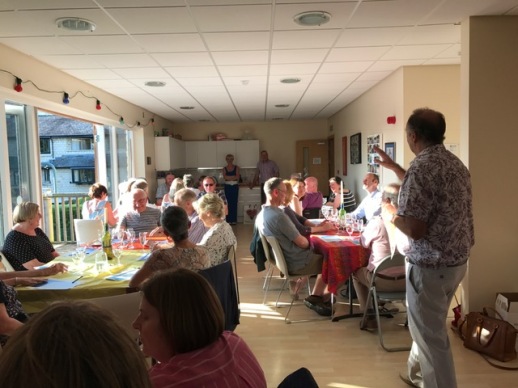 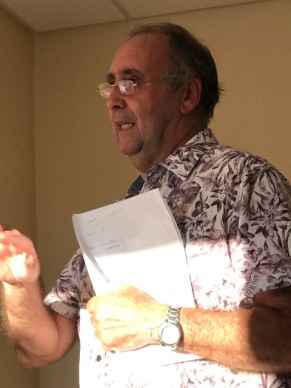 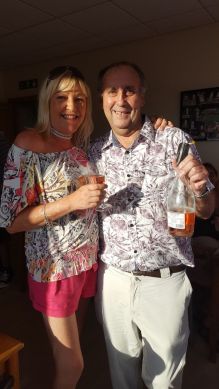 To an ever increasing sound of raucous behaviour the three white wines were tasted and the results revealed – an Albarino from New Zealand , an English wine from Kent with the Bacchus grape and a Sauvignon Blanc from Chile. Not an easy start but at the halfway mark Gary Jones was in the lead closely followed by his better half Ann and a guest Andy.

A delicious spread prepared by Trish followed with the majority licking their wounds but many still determined to take the star prize.

Onto the reds with Doug barely able to cope with the now well intoxicated audience and announcing the results one by one to increase tension. After a Tempranillo from Australia and a Carignan from France fooled most people, Gary had fallen away as had Andy but Ann ,just like on court, was refusing to down tools and was still going strong although now hotly pursued by Delia Wells. 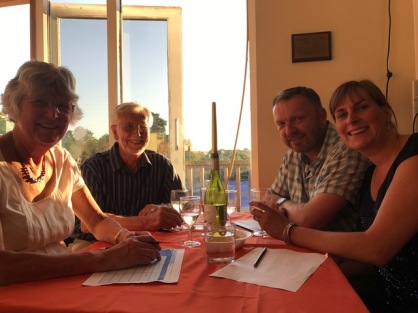 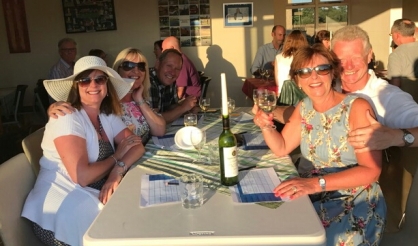 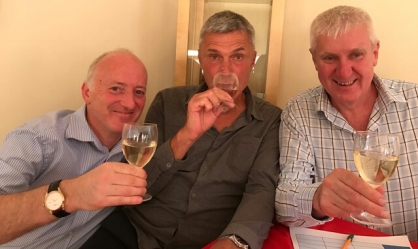 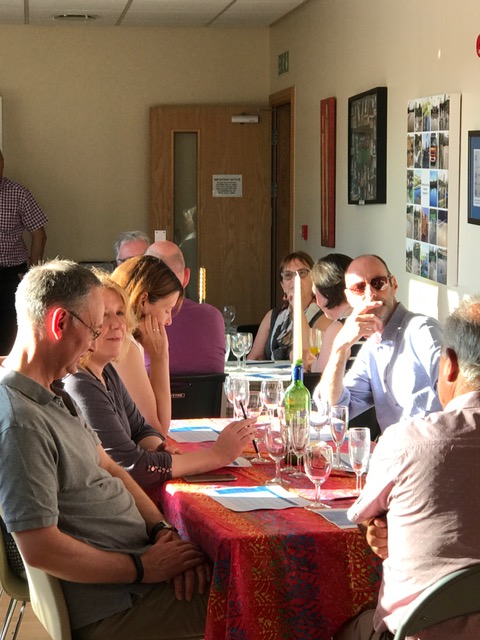 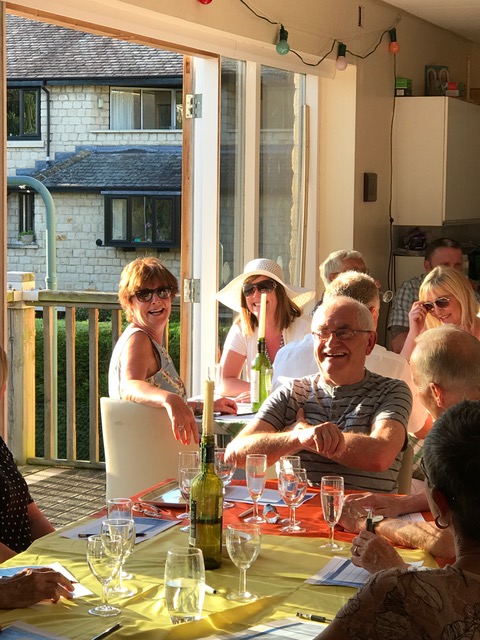 The last wine proved to be an Impertivo from Italy which stumped Delia but not Ann as she took victory to great delight. Of more concern was that Ann is Doug’s regular tennis partner for the Wetherby B mixed team and a somewhat sceptical and slightly hostile crowd were convinced the whole evening was rigged!!. Doug is considering his position but managed to present the prize to Ann and the booby prize of a 2016 edition of Hugh Johnson pocket wine book to Dee who managed a whopping two points from eighteen!! 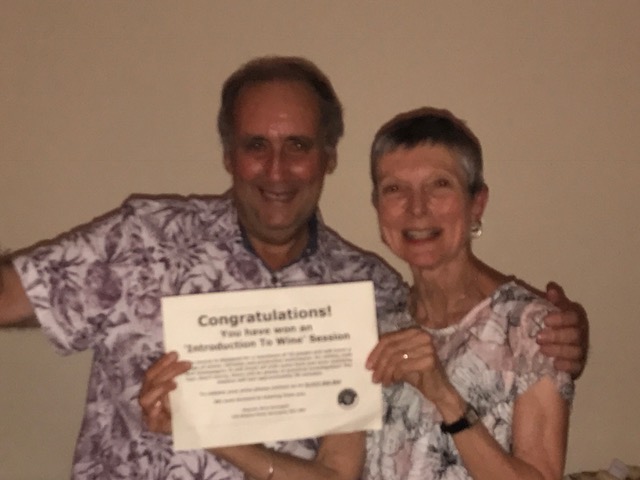 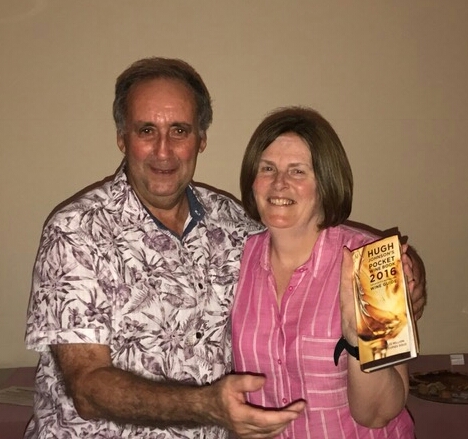 Extensive thanks to Trish and John Bell who sold tickets, provided food, decorated the room, organised music and poured the wine.

Thanks once again to Doug and all concerned who organised tonight and made the evening a memorable one.