Two successive victories have lifted the York 2 mixed doubles team away from the drop zone and tonight they were in action at Castlegarth looking to make that a hat trick. Copmanthorpe were the visitors and thankfully were missing their two leading pairs. Captain Graeme Butcher and regular partner Laura Simpson were absent along with the magician Johnny Kay, who had single handedly dismantled Wetherby in the season opener ,and his useful partner Amanda Robson which gave the hosts a massive pre match boost.

Wetherby were missing their captain Jill Abel along with husband Mike so Dee Nolan stepped in off the subs bench to partner the youngster Sam Moore who was still on a high after helping the men’s second team to success on Sunday. The duo have played previously and were soon dominating their rubber with Ben McLeod and Ann Hopwood. Moore was unleashing some quick forehands from the baseline and with Nolan demonstrating some wonderful rallying of her own coupled with net dominance that yielded many strong vollies, the pair were enjoying themselves. The visitors had no answer and a 9-3 Wetherby win was a very good start to the evening. The sunny weather of the weekend had long gone but a dry and muggy night was certainly appreciated by the players. Rachel Butterworth, who has been looking very impressive at social practise recently, played at seed one with Kevin Duckenfield who was now over his arm injury sustained last week. This pair are very canny and with Butterworth hitting exceedingly well from deep and using craft and guile to disguise many winners the pair were always well in commend against Tim Lundy and Jane Harding. Duckenfield was gobbling any chance at the net and his excellent smashing ability was seen to full effect. The Wetherby couple were in full flow and rattled off a superb 10-2 success to really leave the visitors already on the ropes. Angie Bell and Stewart Robinson have gelled well this term too and once again there was no stopping them tonight. They were quickly out of the blocks and with an excellent understanding the duo controlled proceedings against Mark Blackburn and Linda Withers. The beleaguered Copmanthorpe couple had no answer to the power and class of their Wetherby counterparts and as the scoreboard ticked over the confidence oozed out of the hosts second pair as they ran away with it to record a 10-2 win.

So as round two began Wetherby led 29-7 and this was as good a lead as any team from the club have held all season!. With such a large margin the hosts could now certainly play with a freedom and they exploited the scoreboard to continue their good form.  In fairness Thorpe fought back and third pair McLeod and Hopwood put up good resistance against Butterworth and Duckenfield. However they never really sensed a sniff of an upset and Wetherby took this rubber 8-4. Bell and Robinson also triumphed by the same score line against Lundy and Harding who also improved significantly but still fell some way short of troubling the hosts and Nolan and Moore completed a clean sweep of rubbers as they beat Blackburn and Withers 8-4.

With the tie almost won with the scoreboard showing Wetherby leading 53-19, Copmanthorpe threw in the white towel and with Blackburn unable to continue after pulling his calf, this handed Butterworth and Duckenfield a 12-0 win and straight to ‘Go’ to collect their winnings! Bell and Robinson were determined to boost their stats however and showed the visiting third pair little mercy on their way to an effortless 9-3 success which ensured they finished the night with an excellent 27 points. Nolan and Moore were just two behind at the finish on 25 after accounting for Thorpe’s top pairing and a final winning margin of 82-26 was no more than the side deserved for such a comprehensive performance.

Wetherby remain fifth in the table but close to within four points of tonight’s opponents ahead of a tricky tie at Appleton Roebuck next week. They are riding high in second place and very much have promotion on their agenda. Good luck with that and well done tonight. 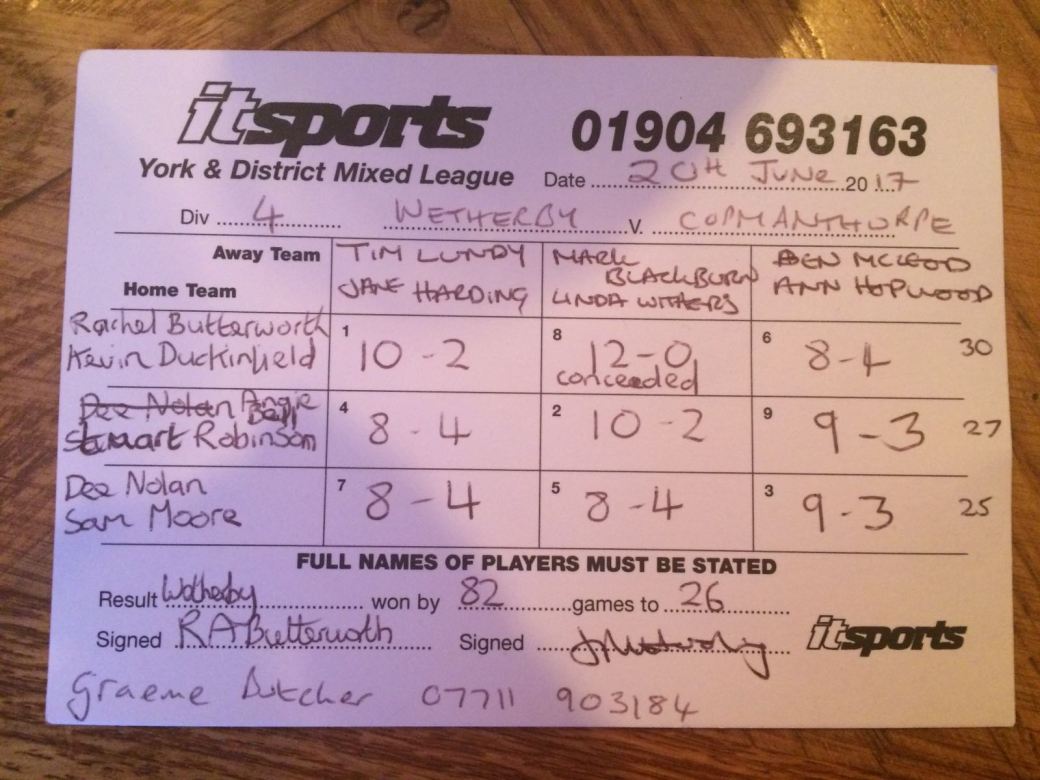