The sun was still shining at Castlegarth as Wetherby B entertained Burton Leonard in a tea time kick off with both teams in the thick of the promotion race in Division Five this term. Wetherby were missing key personnel Ann Lillywhite and Peter Shipston from the team that lost to Wetherby A on Thursday so Ian Teasdale and Katie Barrett stepped in and teamed up at seed three together. The visitors arrive without star man Carlos Horner, who is arguably the leading man in the section, which was a major loss for them but gave the hosts a hugh pre match boost.

The trickery of Teasdale was all too evident from the outset and with Barrett displaying great court coverage and some excellent volleying the Wetherby pair were enjoying themselves on court three against John Crompton and Caroline Barr. Crompton is an enthusiastic player who is also quick around the court whilst Barr was playing some excellent shots from the baseline and retrieving many lost causes. This proved a fascinating close rubber with Wetherby just scraping home for a narrow 7-5 success. Walter Skubiak currently tops the chart for the team in rubbers won and he paired up with Judith Crossley who was impressive against the A team on Thursday. Always a tricky customer Crossley serves well and volleys with confidence and her partnership with Skubiak was full of promise. They took on the giant Hugo Smith and his canny partner Rosie Nelson and once again there proved to be little between the pairs. Skubiak hits hard and with accuracy and he put the Leonard pair under immediate pressure but they stayed calm and began exploiting gaps to ensure they were well in this contest. However the greater consistency of the Wetherby duo proved the difference and they too record a narrow 7-5 win. Doug Harrison and Ann Jones have been in good form this term and are always very consistent and extremely hard to beat. They stepped up to seed one where they faced a very strong couple in Nick Coates and Angela Crawshaw. Crawshaw leads the Burton scoring stats and is a very keen and professional performer with a great all round game and excellent temperament. She and Coates were going to prove difficult to contain although the canniness of the Wetherby veterans would ensure this was yet another close affair. Burton carried the heavy artillery but the composure and guile of ‘soft hands’ Harrison alongside the battling Jones kept them in the tie. Eventually they just fell short losing 5-7 but this left Wetherby ahead 19-17 at the conclusion of the opening round.

Teasdale and Barrett took on Smith and Nelson and this always had the look of another close game. Smith was proving difficult to lob although Teasdale loves a challenge and continued to probe away managing to drop many of his famous bombs on the baseline. Nelson and Barrett were enjoying their private battle and with neither woman folding the contest became a fantastic tactical contest. Ultimately no pair deserved to lose so happily honours were even at 6-6 as the bell rang. Skubiak and Crossley knew their clash with Coates and Crawshaw would prove their most difficult of the evening and they were under no illusions that they faced an uphill task to take much from this rubber. However adopting an aggressive style Skubiak attacked from the outset and was keen to put pressure on the visitors. However Coates was equal to the battle and with Crawshaw using her experience to take the sting out of Crossley’s returns the visitors began to turn the screw and edge ahead. They finally ran out 4-8 winners. Harrison and Jones were hoping to put some points on the board for Wetherby but with expectations high they perhaps felt the pressure to respond and were unable to do themselves justice. Harrison was unable to dominate at the net as he often does and with Jones a little wayward with her returns Crompton and Barr gained in confidence and sensed a surprise. They remained extremely strong and fully deserved their 5-7 win which enabled Burton to take a narrow 34-38 lead going into the final round.

A large crowd was now in attendance on the side lines and they would witness a thoroughly exciting climax to an enthralling final round as the tension mounted both on and off the court.

Teasdale and Barrett were on the show court and urged on by the crowd battled hard to stay in their tough rubber with Coates and Crawshaw.Coates was hitting some lovely forehand winners and with Crawshaw unnerved and happy to keep the ball in play the onus was on the Wetherby couple to find a way to upset the formbook. The found themselves trailing 2-9 but crucially took the final game and a 3-9 result certainly kept them in the shakeup. Harrison was in a very determined mood as he and Jones stepped out on Court Two to face Hugo Smith and Rosie Nelson. Harrison was like a greyhound out of the traps and he immediately started to punish the Burton pair with a dominant display of controlled volleys which were expertly angled away into space. Jones was in no mood to fold either and she continually returned so ensure Harrison was well placed to finish off the rallies. The scoreboard was ticking over nicely and with the experienced duo mindful of scores elsewhere they continued to press hard with clinical efficiency. They finally ran out very impressive 11-1 winners which suddenly had the visitors panicking as their seemingly big margin was been whittled away. With Wetherby now on 48 they knew Skubiak and Crossley would need seven to record victory but Burton Leonard started the rubber the better and made the early running. However Skubiak and Crossley can always be relied upon to battle to the finish and with Skubiak hitting some ferocious returns with real venom the Wetherby couple were now starting to dominate. Crossley stood firm at the net to produce some impressive smashes and at the finish it was the hosts who were celebrating as a 8-4 victory was enough to ensure a final victory of 56-52.

To great applause the team left the courts after one of the best finishes of the season and this result meant the side moved up to third alongside tonight’s opponents who are now both on 10 points. Considering the pair were both heavily involved in a relegation battle last season it’s great credit that they have improved sufficiently to sit above mid table and now almost free from relegation. Both still have aspirations of promotion and are four points adrift of Wetherby A who presently occupy second position.

A great nights tennis and well played to all concerned and a big thanks to Burton Leonard for contributing to a truly memorable contest. The team are next in action a week on Wednesday when they travel to Ripon. 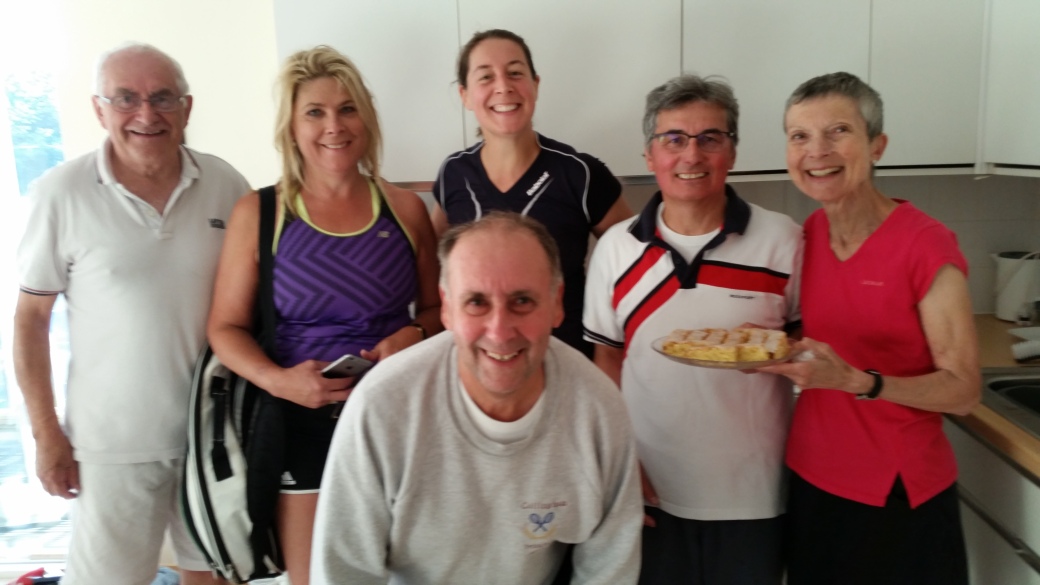 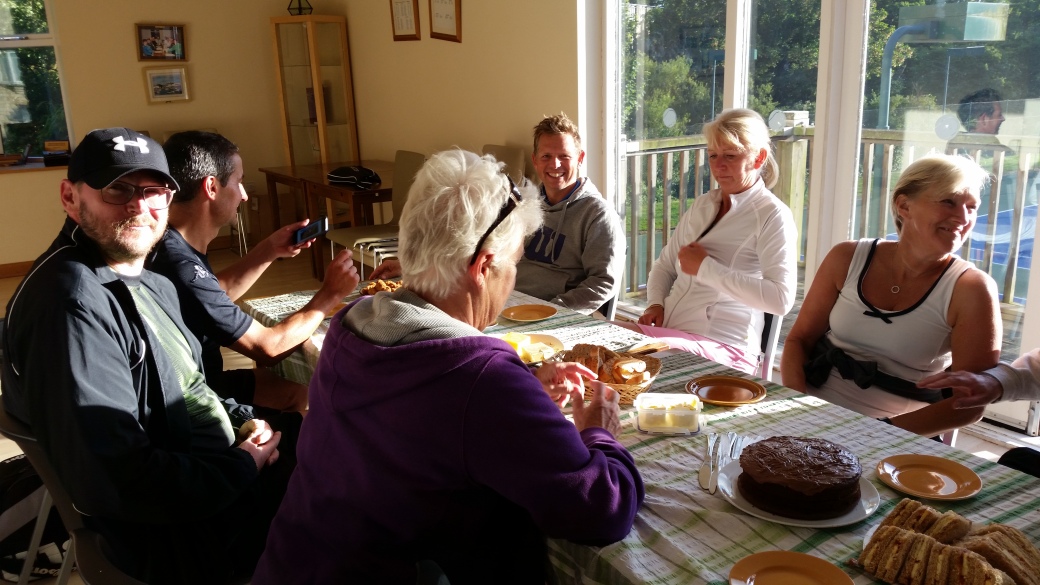 The gallent runners up were from left to right – Rosie Nelson in the purple, Hugo Smith, John Crompton, Nick Coates, Angela Crawshaw and Caroline Barr. 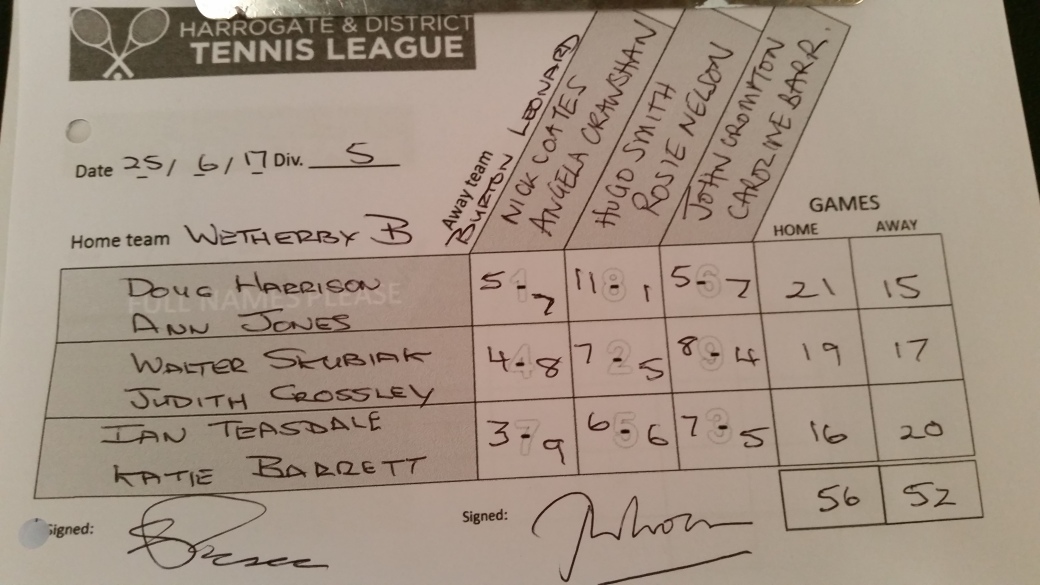