Thursday night saw the big promotion clash between Wetherby A and Burton Leonard at Castlegarth. Wetherby have been in the top two all season but after consecutive defeats find themselves only two points ahead of today’s visitors. After missing the last three games Leonard arrived with star player Carlos Horner in attendance but due to absence Wetherby were happy to see Kevin Duckenfield in their line up who has been a regular for many previous seasons in the team.

Duckenfield teamed up with former playing partner Fiona Chantrey at seed two and they opened up on court Two against Caroline Barr and Bob Lockwood. Vetern Lockwood is a wily character and plays some very thoughtful tennis with a lovely disguised game plan. Barr was returning and competing well but the visiting pair would have their work cut out to hold a strong Wetherby duo. Duckenfield was returning to the fold after a three week absence but looked fresh and eager for action. A good service game and dominant net play, where he despatched many loose balls, saw him quickly get into gear and with Chantrey returning well and stretching her opponents well they quickly started to move the scoreboard. They secured a nice opening 10-2 success to give the hosts an excellent start. Mike Triffitt and Louise Williams were back together on court three as they took on Burton captain Nick Coates and Rosie Ellerby. The home pair looked nervous with stakes so high and were unable to get a foothold in the rubber. With the Leonard pair returning well and dominating play they led 1-5 and things were looking grim for the home duo. However they bounced back and with Williams getting the forehand motoring and Triffitt having success with a number of smashes they reduced the arrears to 5-4. They couldn’t quite complete a comeback but at 5-7 defeat was not a disaster. On Court One captain Barry Johnson along with the classy Dawn Steel were taking on Horner and Becky Coates. After been on the end of a Horner masterclass in the return leg Johnson was now far better equipped and fighting fire with fire matched his more illustrious opponent point for point. Steel was getting the upper hand on Coates and the tie was finely poised at 4-5 when disaster struck for the visitors. Horner turned his ankle attempting to retrieve a Johnson smash and clearly in discomfort and injuring a long term problematic area was unable to carry on despite the good doctoring work from Nick Coates. This was a shame as the match looked extremely close and was obviously going to have a massive impact on the promotion places. Therefore Johnson and Steel took the rubber 7-5 but with the concession of a further 24 points Wetherby were now well and truly in the driving seat.

Triffitt and Williams moved over to Court Two to face Barr and Lockwood but once again they struggled for momentum and were unable to produce the attractive tennis that has seen them shine on a number of  occasions together this term. In what turned out to be a frustrating affair Bob Lockwood proved to be difficult to pass and with some deft touches had the Wetherby pair on the ropes. Barr was gaining in confidence and returning well and despite a late rally which saw Williams hit some lovely winners, she and Triffitt left their run too late and once again were to succumb 5-7. Steel and Johnson however were in excellent form and with a nice understanding and simple game plan they began to dictate matters on Court Three. Nick Coates and Rosie Ellerby were unable to put enough pressure to influence the result and Wetherby ran out impressive 10-2 winners. Chantey and Duckenfield who had sat out the second round returned to complete their evening when proving too strong for Nick Coates and Rosie Ellerby. They didn’t have matters all their own way but were able to up the tempo when needed to ensure they had too much class for the Burton third pair. An 8-4 victory meant they had secured 30 points on the night . Steel and Johnson kept up their consistent play as they took on Lockwood and Barr. They were always in command but with the Leonard pair not rolling over it was a tough encounter that needed winning. Steel rarely missed an opportunity to attack and Johnson was having great success with a number of well directed smashes. Wetherby took the rubber 8-4 for a well deserved 25 points for their considerable efforts.

So although fortunate to take 27 free points, the final score saw the hosts run out worthy 77-31 winners and they would like to feel that even without injury they would have been able to win the match.

Wetherby now move 4 points clear of the pack and with only three games left to play will feel two more wins should be enough to join Harrogate Spa in celebrating promotion.

Well done to everyone tonight and thanks to our sporting friends from Burton Leonard for providing a good contest.

From left to right gallant runners up Caroline Barr, Bob Lockwood, Rosie Ellerby and captain and always smiling Nick Coates. The unfortunate Carlos Horner was long gone as was his driver Becky Coates. 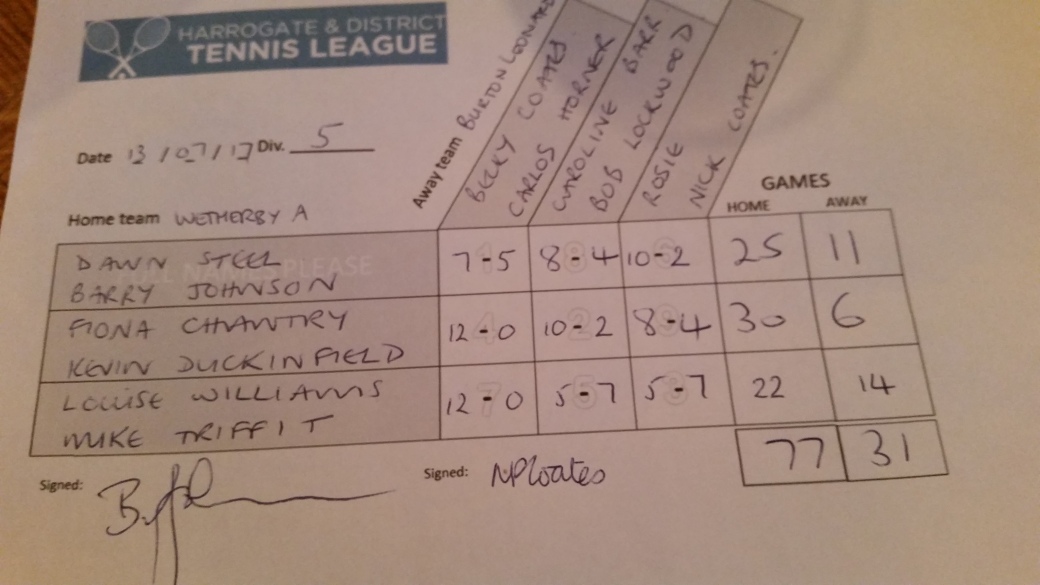