Wetherby U14 and Chapel Allerton met on Saturday tea time in the final of the Leeds U14 Trophy. Both teams had won their respective groups and after winning their semi finals were worthy finalists. Chapel arrived as favourites after winning all five group games but Wetherby were unbeaten too after winning three and drawing two. Both teams picked from strength and this promised to be an exciting climax to the season.

Zak Watson has been tremendous this term for the hosts and once again the youngster stepped out onto Court One as the number one seed where he faced the imposing figure of Rohan Johar. Both players are big hitters from the baseline and can hit confidently with forehand and backhand. There was some tremendous long rallies and great recovery shots but Watson gave the hosts a good start by taking the opening set 4-2. However Johar settled better in the second and started to up the tempo and using the width of the court sprayed the ball around impressively. A good crowd watching on the side lines were thoroughly entertained as Chapel levelled following a 3-5 success. This left a championship tie break to settle the outcome and with both players giving everything to the end it was Johar who ran out a narrow 8-10 winner after holding his nerve. A superb rubber and one of the best junior matches seen for quite some time from two above average competitors.

Henry Brown was once again playing seed two for Wetherby and he faced Rhys Cruz. Again this was a battle of two big hitters and looked tough to call pre match. Brown is a big unit and as well as hitting well from deep tried to intimidate his opponent with some trips to the net. However the Chapel youngster has a very accurate passing game and used those to good effect to counter Browns threat. The opening set was tight before Brown held firm in the tie break to take the first 5-4. Cruz countered well in the second but Brown has a good temperament and is rarely fazed. He battled manfully to secure the second set 5-3 to level the overall score at 1-1.

Bradley Triffitt and Sam Spencer teamed up in the doubles but looked to have their work cut out against the impressive Chapel pair of Anish Johar and Tom Barlow. Triffitt is a tall character and tried his best to control the net whilst a scampering Spencer chased down many lost causes. However the visiting duo were hitting harder and with deadly accuracy and began to take control. They won the opener 0-4 and although the hosts managed to avoid a second set whitewash they were powerless to prevent a 1-4 loss which saw Chapel regain the lead at 1-2 overall.

Watson and Brown were back on the show court to face Johar and Cruz in the doubles and just like the singles games involving the quartet this proved a contest to savour. Some incredibly high standard of play was on view with both pairs working tirelessly and with great team work to provide a number of mouth watering rallies. It was hard to believe we were witnessing an U14 clash such was the ferocity and quality on view and in another tight opener Wetherby took the first set 5-3.

On Court Three Bradley Triffitt was facing Anish Johar, who is the younger brother of Rohan. Johar continued where he left off in the doubles by dominating the opening set and running out a 2-4 winner. However he was shocked in the second as a rejuvenated Triffitt suddenly began to let rip and hitting particularly well and covering every inch of the court he surprisingly reeled off an unexpected 4-0 second set win. With the tie suddenly turned on its head Wetherby had hopes of a shock win but Johar composed himself and ran out a comprehensive 3-10 winner of the Championship tie break to extend Chapels lead to 1-3.

Back on Court One Watson and Brown were still playing exceptionally well and began to turn the screw in the second set. They didn’t give the Chapel Allerton duo a sniff and ran out very good winners 4-1 to again reduce the arrears at 2-3 in the visitors favour.

All eyes now switched to Court Two where Spencer was trying valiantly to tie the match with Tom Barlow. However Barlow, who had played very well in the doubles, was just as classy in the singles and raced away to a 1-4 first set victory. Spencer didn’t give in and battling away gave another big effort in the second but Barlow was oozing confidence and maintained a very high level throughout for a 2-4 second set which ultimately ensured the visitors would triumph 2-4 and take the title.

A great session of tennis between the top two teams and well done to Chapel Allerton on a thoroughly deserved success. Played in a tremendous spirit both on and off the court the players were a credit to their respective clubs and look to have bright futures ahead in the game. 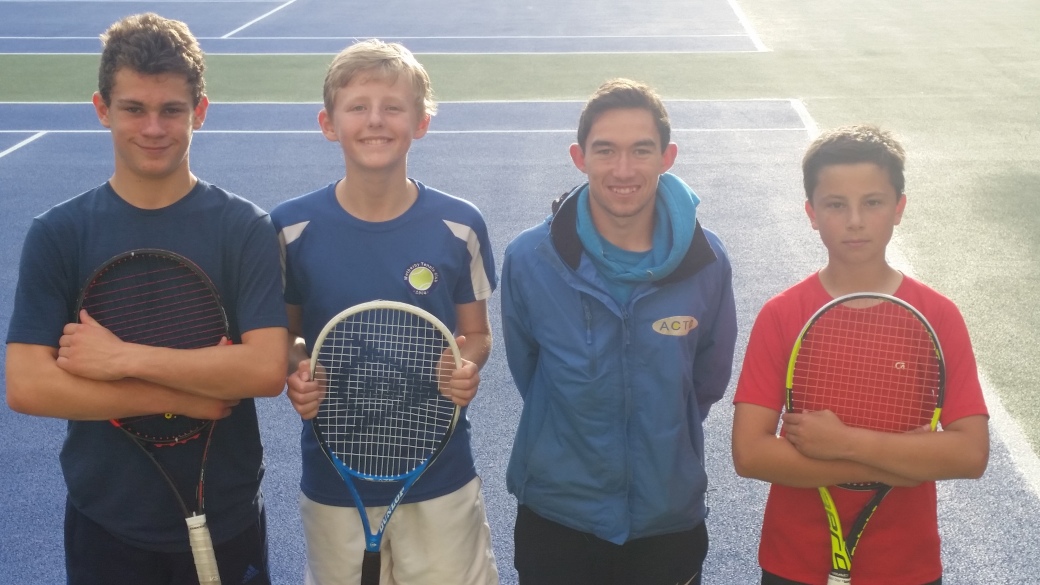 Gallant runners up for Wetherby from left to right were – Henry Brown, Bradley Triffitt, coach Paul Archer and Zak Watson with Sam Spencer absent after his heroics.