The men’s third team travelled to Kirkstall tonight for a match that was rained off at the start of the season. This was always going to be a tough fixture but thankfully the men have already secured promotion so at least the pressure was now off. Player of the season Marc Bickers was missing for Wetherby but luckily Ollie Newsome was available and came in for his second start of the campaign. The team arrived at Kirkstall Abbey and with the threat of rain and the nights now beginning to shorten, play started promptly as the hosts do not have any lights!

Captain Mike Triffitt was playing in his eighth game of the season which meant he has secured the most game time and Ollie Newsome paired up with him at seed one. They opened up against Kirkstall second pair Paul High and Matt Scott. High is a tall and well built individual who tops the Leeds based sides player stats table this term. He is dangerous at the net and difficult to lob and would prove a formidable opponent all evening. Youngster Scott is a quick improver and was hitting hard and accurate from the baseline. This meant the opening set was extremely competitive with youngster Newsome happy to battle it out from the back with some hard hitting of his own whilst Triffitt produced some accurate net play and plenty of backs to the wall defending and recovery shots. Wetherby were always behind however and trailing 5-3 they saved two match points before coming back to force a tiebreak. Again the duo would have to play catch up and at 4-1 then 5-2 down it was looking curtains. However Newsome produced some big serves at a crucial time and with Triffitt dangling the carrot with a number of lobs the hosts made errors which the Wetherby men accepted gleefully to take the tiebreak 6-8. The second set was equally as tight with no quarter given from any of the players on show. High was struggling with his serve but was still proving extremely difficult to pass, especially when patrolling the net, and again at 5-3 down Wetherby’s hopes seemed to be fading. However Triffitt and Newsome refused to accept defeat and battling away manfully they again took advantage of unforced errors from the home duo and recovered well to secure a 5-7 win for a narrow 0-2 advantage.

Over on Court Two Barry Johnson and Greg Vince from the successful Wetherby A Mixed team were paired up. Bringing a wealth of experience to the table they took on Kirkstall captain Tim Clement and the exciting James Maskill. Clement was making a welcome return from injury after sitting out the majority of the season. He has been sorely missed and the hosts would surely have been challenging for promotion if he had not been absent. Still finding his feet Clement struggled with his serve but his famous two handed backhand was as fierce as ever and he produced a number of winners from it. With Maskill hitting some tremendous baseline shots the hosts were always ahead although Wetherby battled away to keep the contest tight. Eventually the home pair ran out 6-4,6-3 winners for a 2-0 success and leave the match finely poised at 2-2 after round one.

The threat of rain was still lingering and with the light already starting to fade round two quickly commenced. Triffitt and Newsome were once again involved in a titanic struggle and even contest against Clement and Maskill with nothing to separate the pairs. This set went down to the wire but thankfully Wetherby edged it 4-6 to take a 2-3 lead overall.

On Court Two Johnson and Vince were in fine form and took their higher ranked opponents by surprise as they opened up a useful looking 0-5 lead. However High started to find his rhythm and dominating the net he began to slowly eat into the visitors big lead. With Scott producing more accurate returns, often well disguised, the hosts fought back superbly to record an excellent 7-5 success which made the overall score 3-3.

By now the headlights from vehicles passing on the nearby road were proving useful and it really was difficult to see the ball. The rain was starting to fall but none of this deterred the men on court. Triffitt and Newsome knew they had arguably rode their luck a little and it would need a good final effort to secure a fourth set. However Clement was to produce his best tennis of the evening and with the old magic starting to return he began to boss the rubber. With Maskill hitting hard the Wetherby men were struggling to stay in the tie and trailing 5-2 looked beat. They bounced back to win two games on the trot but were unable to maintain their great run losing 6-4 for a share of the spoils at 1-1. With Kirkstall edging ahead 4-3 all eyes were on Johnson and Vince to save the day for Wetherby. The pair certainly didn’t let their opening loss derail them and attacking early they built up a 1-4 lead. At 2-5 the visitors were hungry and determined to finish the job. With Vince sending over a number of Ian Teasdale style aerial bombs and Johnson producing some fine net play and lovely volleys, the duo ran out 2-6 winners for a 1-1 draw and ensured the match was halved at 4-4.

A great evening of tennis played in an excellent spirit with some good quality on show for many dog walkers and joggers who often stopped to enjoy the action unfolding. Honours even which meant former work colleagues Triffitt and Clement could both leave happy!.

Wetherby move to within one point of leaders Pudsey with both clubs having one match to play. Wetherby need to win at Alwoodley and hope Horsforth can upset the form book and beat Pudsey although it would be a major shock if that was to happen. Nevertheless a fantastic season for the team to secure promotion and well done to all that donned the shirt with pride this term. 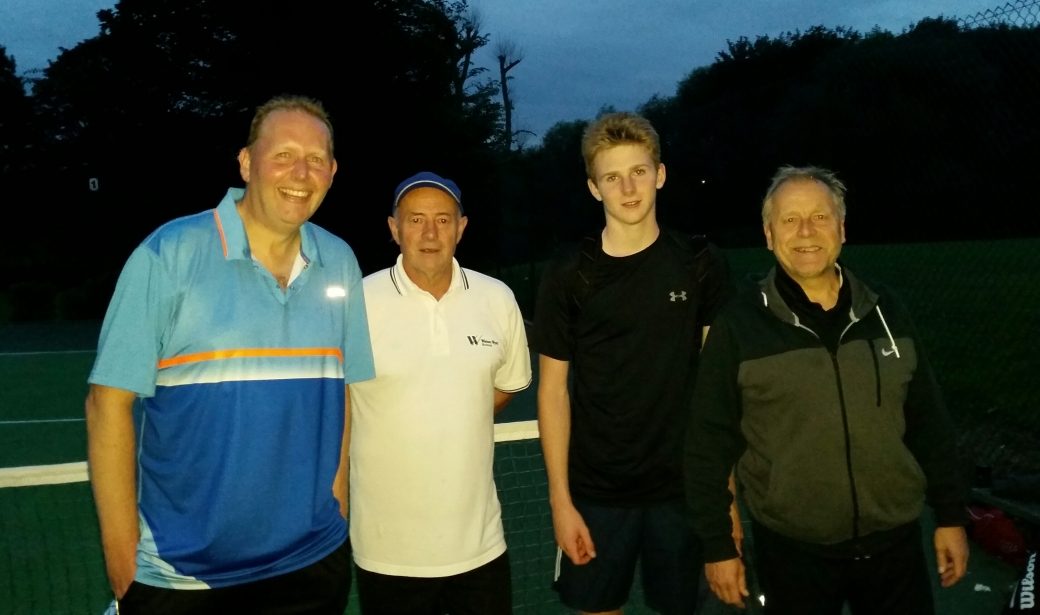 In the gathering gloom Wetherby lined up as follows from left to right – Captain Mike Triffitt, Barry Johnson, Ollie Newsome and Greg Vince.

Seen making a getaway after the match, Barry Johnson and Greg Vince had to scale a high wall to secure their passage away from Kirkstall Abbey!!! 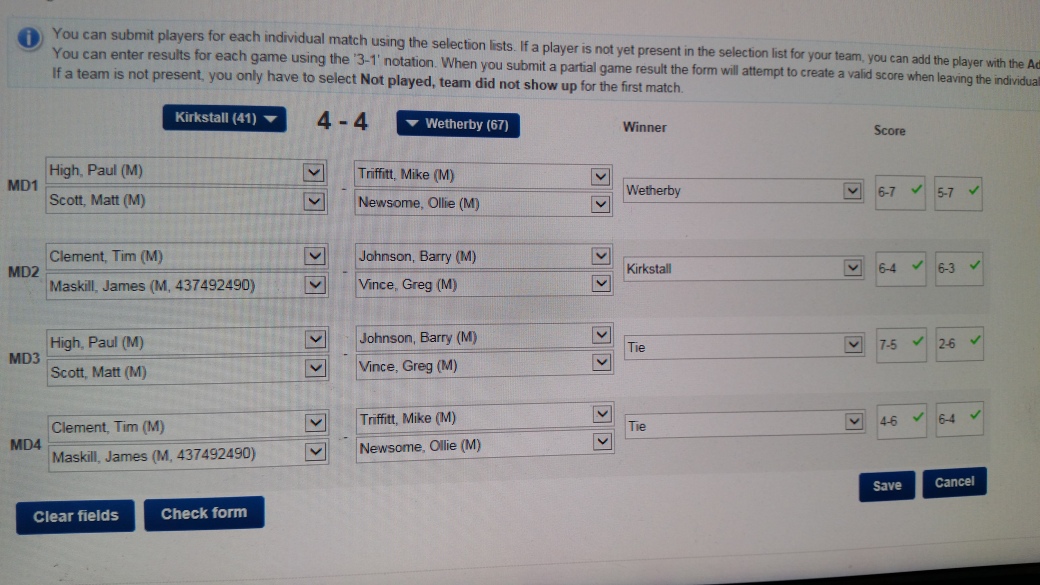