Defending Winter League champions Rufforth were the visitors to Castlegarth this evening as they played Wetherby 2. The visitors had only managed one match this season so were thankful the anticipated rain didn’t emerge and on a dry but cold night play was able to continue without interruption.

Rufforth sent the big guns again with all four member of tonight’s team part of the successful mixed squad that had enjoyed promotion from York Division Two and who will compete in the top section next Summer.

Wetherby fielded Marc Bickers who had enjoyed success with the men’s third team in helping them to promotion whilst Mike and Jill Abel were regulars for the Mixed York second team who had done well in Division Four last season. Captain Janine Smith from the ladies second team completed the home quartet.

It was Smith and Bickers who resumed their promising partnership from last week who paired up once more as they faced Kate Lewis and Tom Shouksmith. Tom had been runner up in the highest rated couples in the mixed and with Kate at number five they would certainly form a formidable duo. However Smith and Bickers were quickly away and determined to put on a show of their own. Bickers was confidently hitting well from deep and with some excellent short play and superb court awareness had the visitors on the back foot. Smith was enjoying the hard hitting which she relishes and produced some fantastic tennis herself as the home pair began threatening a hugh upset. With great consistency they indeed made all to inflict a surprise 8-4 defeat on their bewildered opponents and give Wetherby a fantastic start.

Sue Yoward and James Edmond faced Mike and Jill Abel. The Rufforth duo had topped the York League Division Two Top 25 Couples section after an incredible campaign where they tasted defeat just once in 33 rubbers!. Mindful of the shock defeat of their other pair the couple looked determined throughout and the powerful aggressive tennis they both produced proved almost unplayable. The Abels were left shell shocked and despite a spited effort with countless deuce games and many extremely long rallies, they were on the wrong end of a 0-12 defeat.

So Round Two kicked off with the Champions ahead 8-16. Mike was determined to improve in the men’s rubber where he lined up with Marc. They knew they would be underdogs but both had played well for the Wetherby men’s teams last summer and were used to playing high. However Tom Shouksmith was also keen to avenge that surprise mixed loss and with playing partner James Edmond demonstrating a high array of quality shots and showing why he is one of the leading players on the circuit in the area, the Rufforth juggernaut began to roll. However this proved an excellent contest with no quarter given and the tennis continued at a very impressive pace and standard. Eventually the visitors had a little too much class but the home men were not disgraced in a 4-8 loss.

Janine and Jill knew they would also be heavy underdogs against the Rufforth ladies in their rubber and would soon find out the quality they both possess. Yoward is a very imposing figure and dominates with a great court presence. With Lewis covering every inch the Rufforth duo looked impossible to beat as they reeled off some thunderous shots and clinical net play. Smith and Abel battled away and once more had many moments they could be pleased with but the sheer efficiency of the Rufforth pair proved far too good as they ran out 0-12 winners.

With the tie put to bed the last round was a chance to relax and keep entertaining and none of the players failed in this. It proved to be two keenly contested affairs.

Jill and Mike produced their best tennis of the evening and were rightly rewarded for a big effort with a narrow 4-8 defeat against Kate and Tom.

Marc Bickers and Janine Smith couldn’t quite match their unbelievable efforts from the first round but showed what a good partnership they have unearthed as they ensured opponents Sue Yoward and James Edmond had to pull out all the stops to run out narrow 4-8 winners.

So Rufforth continued the defence of their Winter League crown with back to back opening wins and move into second in the table, two points behind leaders Boroughbridge who they have already beat. They still have two games in hand too so continue to be the team very much to beat. They have no further games before the Christmas break before an eagerly awaited clash with dark horses Boston Spa in late January.

Wetherby 2 are still searching for their opening win but can now put their feet up until February before returning to action.

Well done to all on show for producing some more memorable tennis and good luck in the remainder of your games. 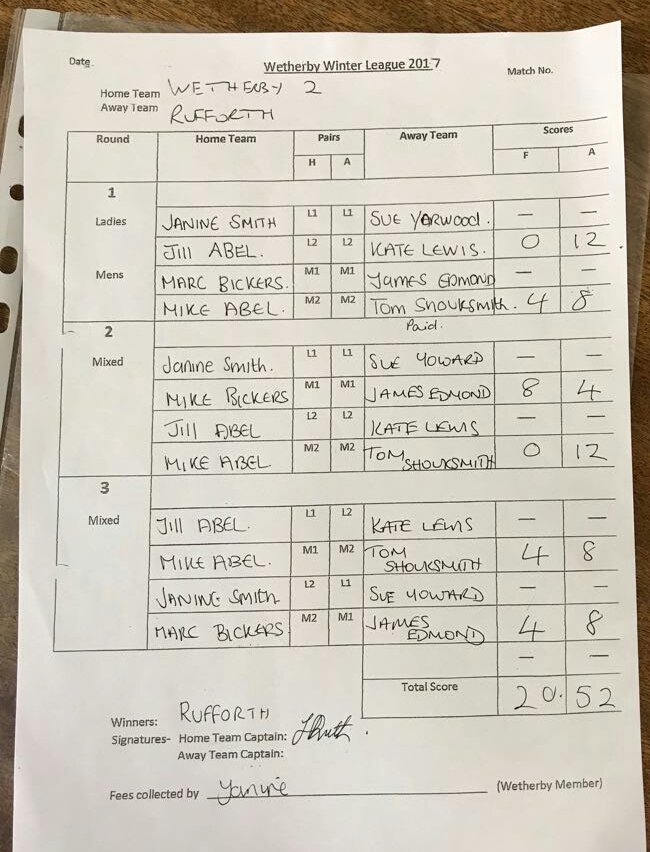