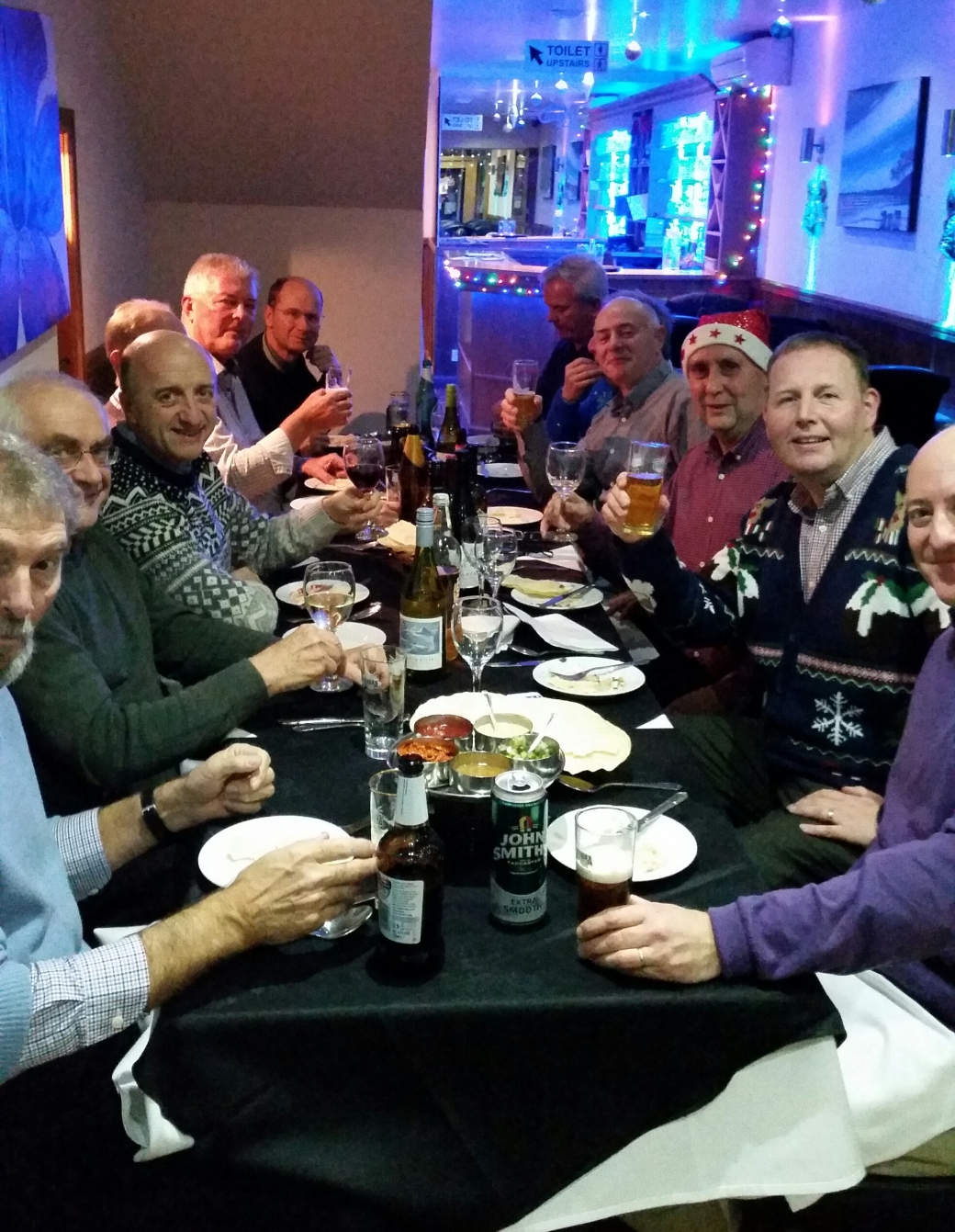 Members of Wetherby Tennis Club were celebrating their annual Christmas evening event at the Bengal Lounge in Wetherby on Tuesday night with twelve in attendance. They are all players who enjoy the Friday afternoon indoor session at Boston Spa. With Ian Wells sadly relinquishing the role of organiser due to ill health the chaps have missed out on their indoor winter tennis this term but were determined to celebrate the meal out. Ian was unable to attend tonight and all at Wetherby wish him a speedy recovery.

Peter Baldwin and Ian Teasdale have been stalwarts of the club for many years and entertained their fellow members with many funny stories from the past both on and off the tennis courts!

Neil Ripley has been sadly missed at the club this year with a long term injury putting him out of action for 12 months. He is chomping at the bit to return and hopes to be back on court in April. Brian Thomas is another long standing and valued member and was also able to recollect tales of yesterday which the chaps found interesting.

Art Page has been a crucial member of many teams throughout the years as has Barry Wilkinson. Both fondly enjoyed going back down memory lane to recount many humorous stories and Art continues to play a big role at the club both in league and social tennis.

Tony Cutler and Greg Vince are relative newbies and were making their first appearance at the ‘old boys’ night out. Tony is a regular at social and has played plenty of league tennis in the Harrogate League and is the captain of the Collingham Winter League team where he is also a member. Greg won the Christmas jumper award after squeezing into one of his sons old ones and is often seen at social and helped guide Wetherby A to promotion from Harrogate Division Five this season.

Barry Johnson and Doug ‘soft hands’ Harrison are often seen on court together and couldn’t be separated this evening. Barry was instrumental in guiding Wetherby A to promotion and also played a significant role helping the Men’s third team to promotion as well in a season to remember for him. Doug made the evening happen with great organising and all the chaps were fully appreciative of his fine efforts once more. He doesn’t ever need much encouragement to say a few words and certainly didn’t disappoint this evening as he entertained his colleagues!. Doug also took the Christmas hat award.

Website and Social media manager Mike Triffitt and Chairman Steve Jones represented the committee and were in fine form too. Triffitt took the Christmas cardigan award with this fine effort whilst Jones was also a debutant at the event and able to conjure up many happy tales from over the years.

A great evening and thanks to all who attended and once again a special and extra thanks to Doug who continues to organise this yearly and much loved social gathering. The Bengal Lounge once more produced the culinary goods and is becoming the place to celebrate various tennis parties with many of our teams now using this friendly location.