Castlegarth hosted another Winter League double header this evening to catch up with outstanding fixtures. Wetherby 1 entertained Collingham whilst Boroughbridge faced Knaresborough. Light rain greeted the players on arrival but thankfully play commenced on time and for the majority of the evening conditions remained reasonable.

Boroughbridge were missing captain Charlie Grasby but still fielded a strong four with the quartet featuring players that had helped Boroughbridge A to promotion from Harrogate Division 2 last season. They faced a Knaresborough side led by captain Paul White who was making a quick return to action after playing in the Winter League on Tuesday. Infact Natasha Quigley and Fran Bakes were also playing twice in two days for a team that had finished mid table in Harrogate Division four last summer.

Boroughbridge therefore started strong favourites looking for victory to join Rufforth at the top of the Winter League table. Simon Robinson and Nicola Scott formed a useful partnership for Boroughbridge and they faced Quigley and Tony Graham who has been successful in the Winter League this term. This proved a close and fascinating contest with little between the pairs. Finally the favourites crept home 7-5 in a tight struggle. Chantal Lancaster and Jamie Jarman took on White and Bakes and this too proved a real war of attrition. Nothing between the couples and with some lovely tennis on show honours were even at 6-6 leaving Boroughbridge marginally ahead 13-11 after round one.

Robinson and Jarmon then teamed up in the men’s rubber against White and Graham and this also went down to the wire with Boroughbridge just edging a narrow 7-5 victory. However the ladies couldn’t be separated with Lancaster and Scott sharing the spoils with Quigley and Bakes from a 6-6 tie.

So with Boroughbridge leading 26-22 and holding a slight four point advantage the final round was eagerly anticipated. Unfortunately the weather put paid to that with snow and hail reigning down the match had to finish prematurely with the favourites claiming the points. Well played to both sides for providing good entertainment on a chilly evening.

Well done to Boroughbridge who from left to right lined up with Simon Robinson, Nicola Scott, Chantal Lancaster and Jamie Jarman. 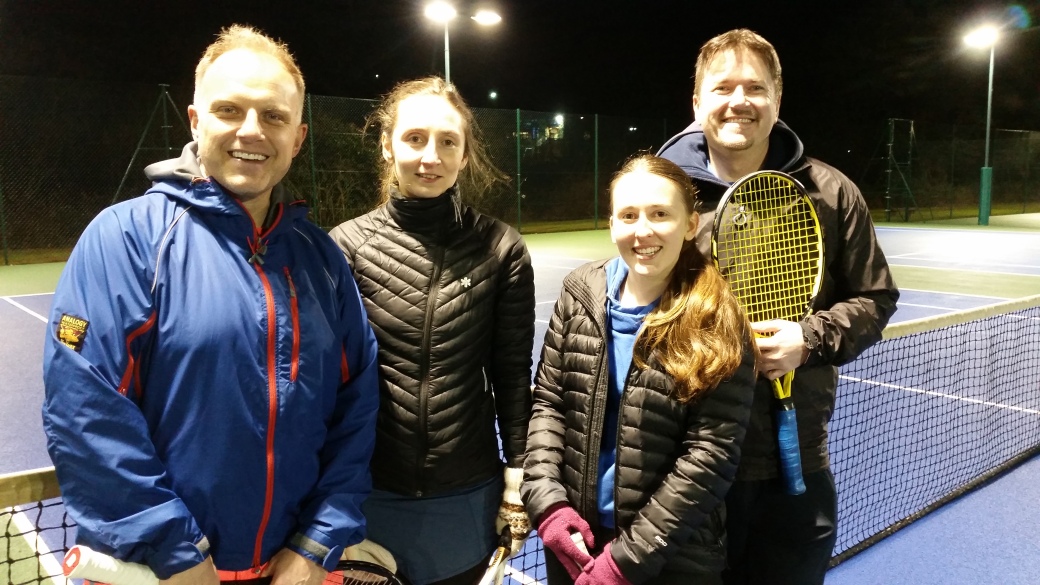 Over on Courts 4 and 5 Wetherby 1 were playing Collingham who were playing their final match of a debut campaign in the Winter League. Captain Tony Cutler has done a splendid job this year organising and sending out a competitive four and tonight was no exception. Barry Johnson once more teamed up with Cutler along with regular ladies Sally Johnson and Maryla Gledhill.

Cutler and Gledhill opened up on Court four and faced Marc Bickers and Rachel Butterworth. The magic man was a welcome addition to the team and was making his first start of the campaign along with the classy Butterworth. This looked a strong duo for the hosts and so it proved as they produced some impressive tennis to run out 9-3 winners. Bickers served well and hit some thunderous forehands from deep whilst the ever consistent Butterworth was particularly crafty and match savvy as she used the width of the court effectively. Cutler and Gledhill certainly put up a fight and there was some splendid long rallies but they ultimatley came up short.

On Court Five Wetherby captain Mike Triffitt was making his first start of the season and teamed up with another debutant in Dawn Steel. This pair have endured success in the Harrogate leagues and were certainly no strangers on court. They faced Barry Johnson and Sally Johnson who have developed a good understanding on court this year. This rubber was close throughout with little between the pairs. However at 5-5 Wetherby managed to find some consistency to run out narrow 7-5 winners and take a 16-8 advantage into round two.

Bickers and Triffitt had enjoyed considerable success for the men’s third team as they gained promotion from Division 6 in Leeds last term and they looked in confident mood tonight reunited together on court. Bickers was certainly starting to dominate and show his class with some beautiful hit winners and great court coverage. Cutler and Johnson battled manfully and gave everything but with Triffitt steady and returning well Wetherby ran out cosy 10-2 winners.

Over on Court four the ladies match was seeing some long rallies and thoughtful tennis. There seemed little between the teams but Steel and Butterworth are an experienced duo and were starting to convert on the crucial points. The Wetherby girls were growing in confidence and great team work saw them celebrate a 11-1 success.

Before the snow halted play round three had begun with Butterworth and Bickers 2-0 up against the Johnsons and Triffitt and Steel 3-1 ahead against Cutler and Gledhill.

The players rushed from Court with Wetherby running out 42-12 winners. Wetherby move above Boston Spa into third place and have two games to play.

Once again a match played in great spirit and a real credit to the Winter League. A big thanks to Tony Cutler and his merry band of players at Collingham who registered two wins in the season and we look forward to welcoming them back next year. 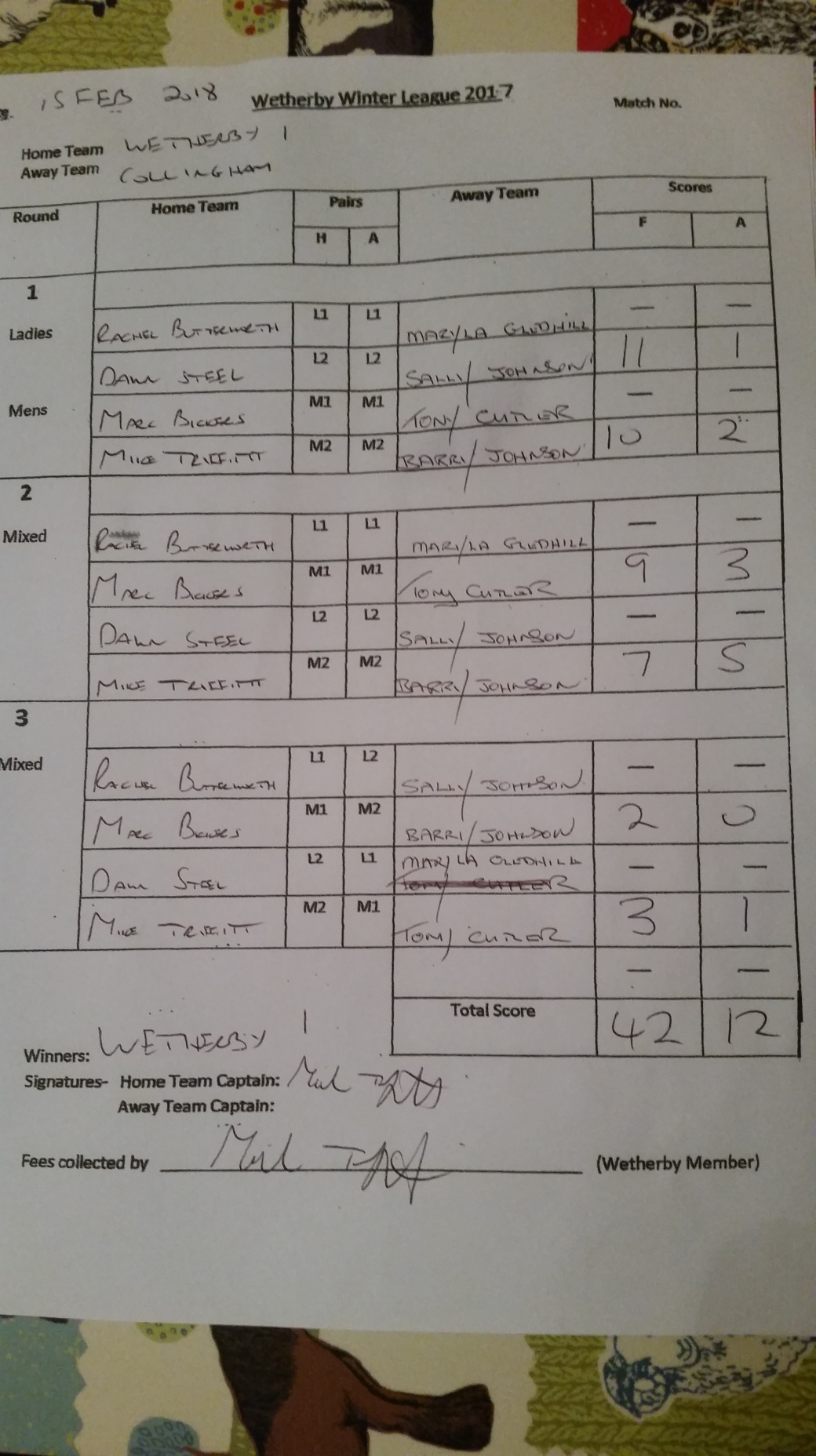