Wetherby 2 entertained close rivals Boston Spa at Castlegarth this evening in the Winter League. Boston sent a strong four with the quartet all regulars in the Harrogate Division Two Summer League. Wetherby captain Janine Smith was joined by regular Division Five colleagues Louise Williams and Barry Johnson with Nigel Williams from Division Two renewing battle with his regular opponents in the higher section.

Therefore Boston would be strong favourites on a lovely evening for Winter action.

Spa captain Jordan Gregory was making his first start of the campaign and he was soon into stride for the visitors pairing up with the classy Pauline Belt. The duo had too many tricks for the hard working Barry Johnson and Janine Smith and despite some exciting rallies Boston proved too strong.

Peter Smith has been a standing dish in the Winter League and is one of the most feared opponents in the competition. Teaming up with his regular partner Lesley Haley, who was back from holiday, the duo showed their undoubted class against Louise and Nigel Williams.  This was a return to competitive action after a break since the end of the Summer season for Nigel and like they say in racing circles, he will certainly come on for the run. Another exciting rubber with moments of exceptional tennis but once again Boston would have too much firepower.

There was no rest bite for the hosts either in the ladies or men’s rubbers with both Spa couples showing superb team work and awareness so keep the scoreboard ticking over nicely in their favour.

With the match in the bag Wetherby finished with a flourish to improve their score with Nigel and Louise combing nicely to run Belt and Gregory close. They were very competitive as they made the visitors pull out all the stops before narrowly succumbing 4-8.

Johnson and Smith managed another 2 for the Wetherby total and enjoyed themselves against their superior rivals. Producing some moments of real quality themselves both will have enjoyed the outing knowing they will thankfully unlikely face such strong opposition again this summer!.

Boston ran out cosy 13-59 winners and leap frog over Wetherby 1 back into third place in the table. Once again a big thanks to those on show for ensuring another good Winter league evening. Boston have just the one game left as they play high flying Boroughbridge next Tuesday looking to hold onto third place whilst two games remain for Wetherby 2 this year. 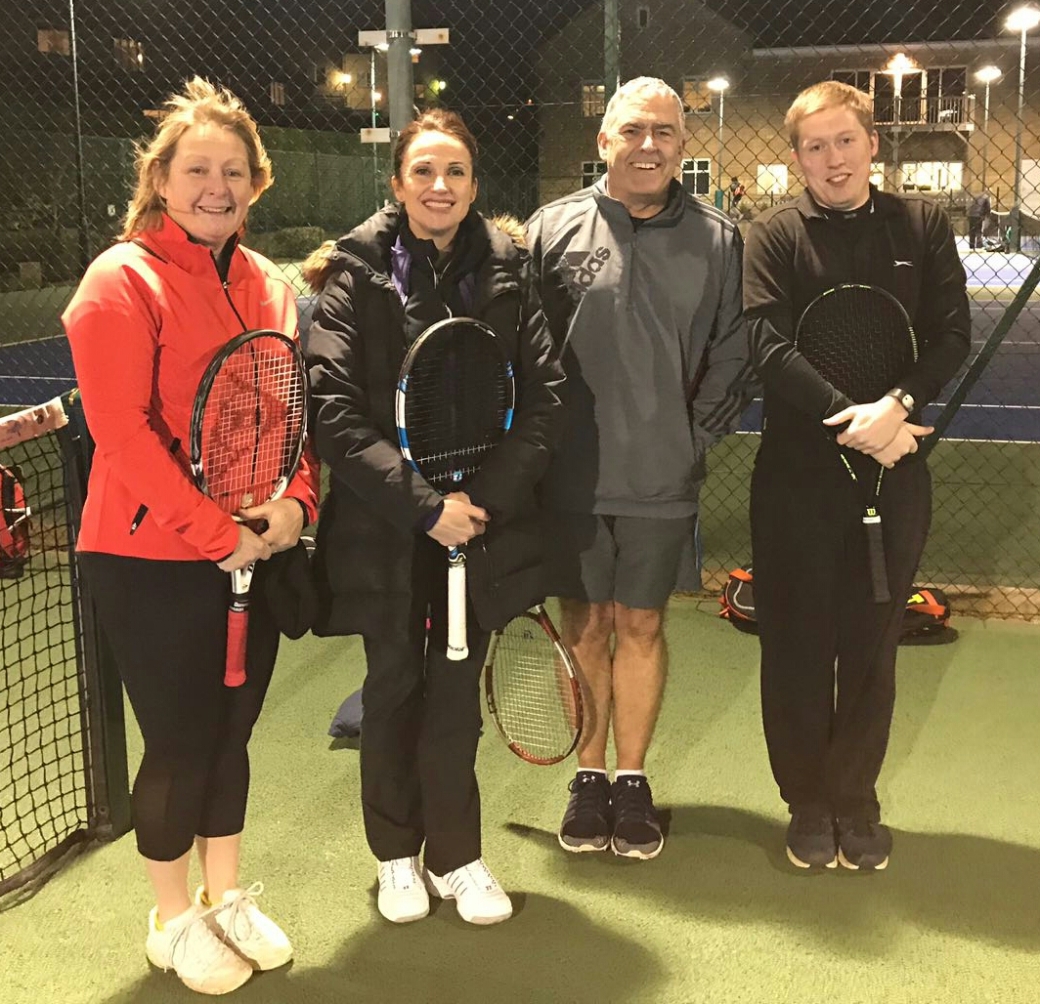 Well done to the impressive Boston Spa team this evening who lined up from left to right as follows – Lesley Haley, Pauline Belt, Peter Smith and captain Jordan Gregory. 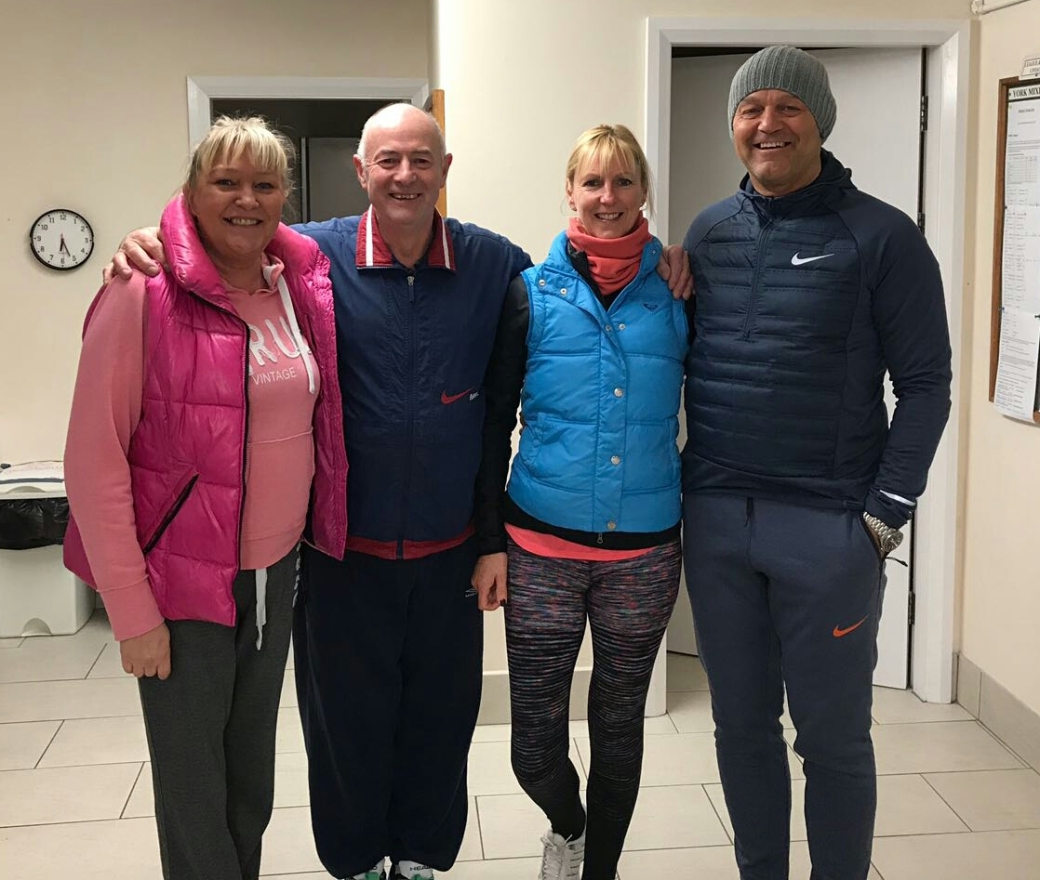 A gallant second for the hard working Wetherby 2 quartet who lined up from left to right with captain Janine Smith, Barry Johnson, Louise Williams and Nigel Williams. 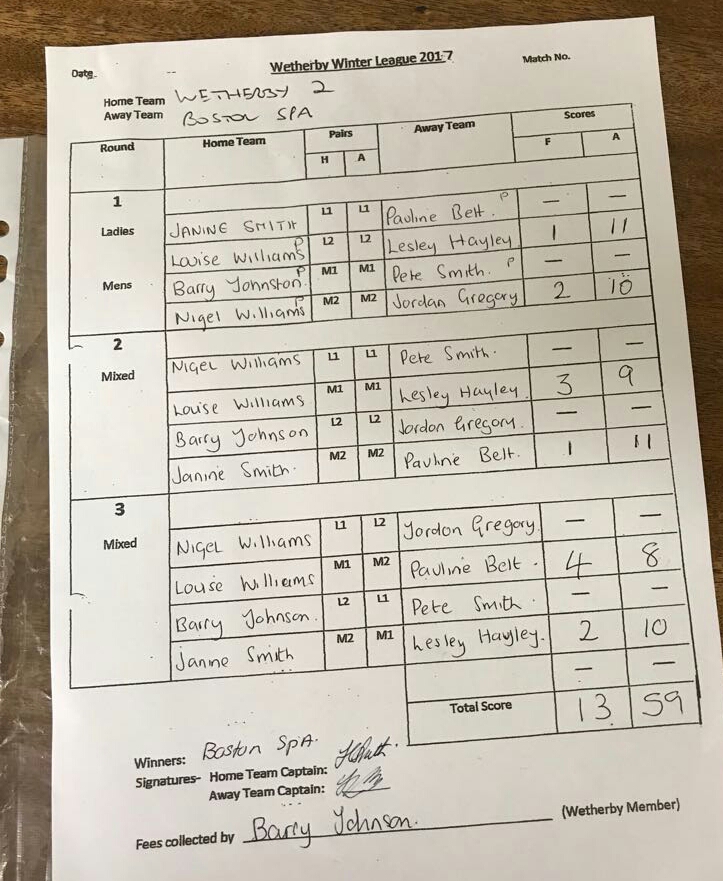