Champions elect Rufforth strode confidently into Castlegarth on Thursday evening looking for the victory which would virtually seal a second consecutive Winter League crown. They once again selected from strength and would face a Starbeck quartet sitting mid table. However Di Lang had recruited a nice looking four herself for the Harrogate based outfit and this looked like been a good contest.

Temperatures were starting to drop and there was an icy chill in the air as play got underway. Thankfully a dry and crisp evening meant conditions were good underfoot however.

Round one certainly lived up to expectations and we had two excellent rubbers. Captain for the evening Sue Yoward has been one of the most highly rated ladies on show in this seasons Winter League and she is a crucial member of the Rufforth squad. She teamed up with the youngster James Edmond who has arguably been the highest rated male on show in the competition this time around. So the pair formed a lethal partnership and would take some stopping again tonight. They faced Starbeck captain Di Lang and Chris White fresh from leading Starbeck to title success from Harrogate Division Four last summer. These two are no strangers on court and are more than useful themselves. A fantastic match ensued with both pairs producing moments of brilliance. Ultimately Rufforth just got home 7-5 after a gruelling encounter but the champions top seeds had been fully tested here.

Ed Ziegler is another regular for Rufforth and again one of the leading men in the competition. He was joined by Judith Evans who was making a rare start but has bags of experience in the ladies York leagues. They took on Chris Noddings and Izzy Blower. A special mention for Noddings who is emigrating to the USA and was making his farewell Winter League appearance. Chris is a superb player and a lovely chap both on and off the court. He has been a crucial member of the Starbeck club competing at the high end in both men’s and mixed for them. He will be sorely missed and we wish him well for life over in the States. He would certainly enjoy himself in this rubber as once again there was little between the pairs. Blower had also starred for the promotion winning Starbeck summer team and she and Noddings formed a strong duo. Noddings and Ziegler exchanged a number of well executed hard hitting baseline rallies and both men were confident at the net. Evans and Blower were strong around court and this was developing into a fascinating duel. Finally honours were shared at 6-6 in an excellent game.

Rufforth took a slender 13-11 lead into round two therefore and the contest remained as tight as ever following the ladies rubber. This always looked a close game to call with the pairs well matched and so it proved. Some more free flowing tennis and a share of the spoils following a 6-6 tie left the match well poised.

It was now however that Rufforth showed why they remain unbeaten in two years as Edmond and Ziegler began to move impressively through the gears. The Rufforth men proved unplayable and with great understanding showed their undoubted class. Noddings and White battled manfully and certainly ensured the match had some excellent moments but they couldn’t match the consistency of the favourites and fell 10-2.

With the lead now stretching to 29-19 Rufforth had the finishing line is sight as the final round commenced. Lang and White however were not giving up the ghost and once again were involved in a thrilling nail biter. Giving everything against Ziegler and Evans they agonizingly came up short and lost once more 7-5 after a great battle. It was left to Yoward and Edmond to cement victory although Nodding’s enjoyed his final moments at Wetherby with some more tremendous hard hitting and Blower confirmed herself a more than useful player as the Starbeck duo narrowly lost 8-4.

A great evening of tennis and a final margin of 44-28 for Rufforth means barring a mathematical disaster they should retain their crown. They move two points clear of Boroughbridge at the summit and only Wetherby 1 can now stop them achieving the whitewash and recording a magnificent 7!.

Starbeck have now concluded their campaign and currently sit in fifth although if Knaresborough beat Wetherby 2 they will drop one place. A big thanks to those who represented Starbeck this term. Captain Di Lang has been an excellent leader and organiser and has certainly made my job easier with her flexible approach to posponed games most appreciated. Chris White has been a regular and has had to pull out the stops a few times to make games and recently even had to play in borrowed kit to fulfil obligations!

Wetherby 1 can actually join Rufforth on 12 points this season if they win their final two games which would involve the difficult task of beating the champions elect and that match is scheduled for Thursday March 8th which is the final game of this seasons Winter League. 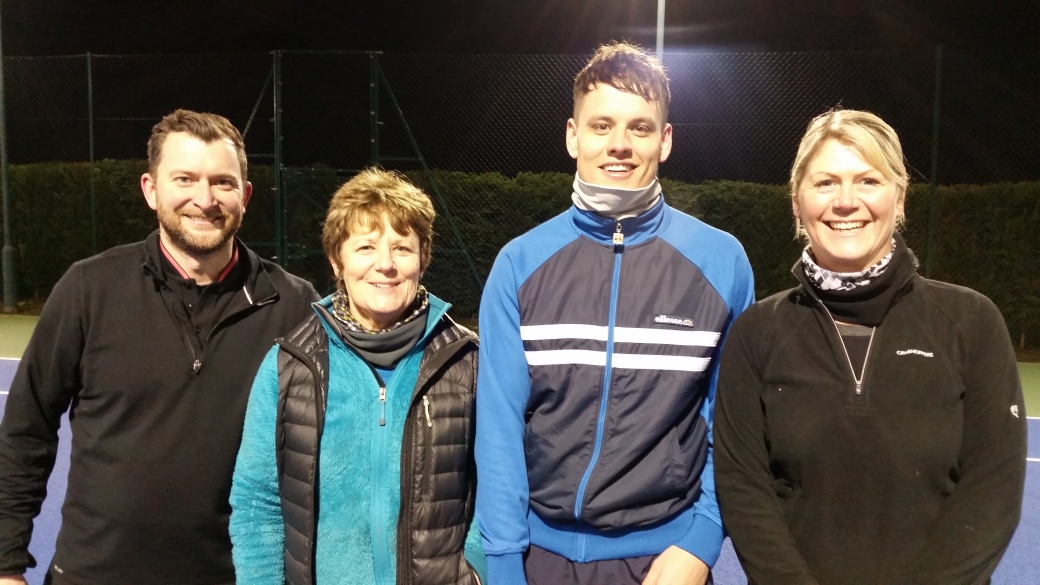 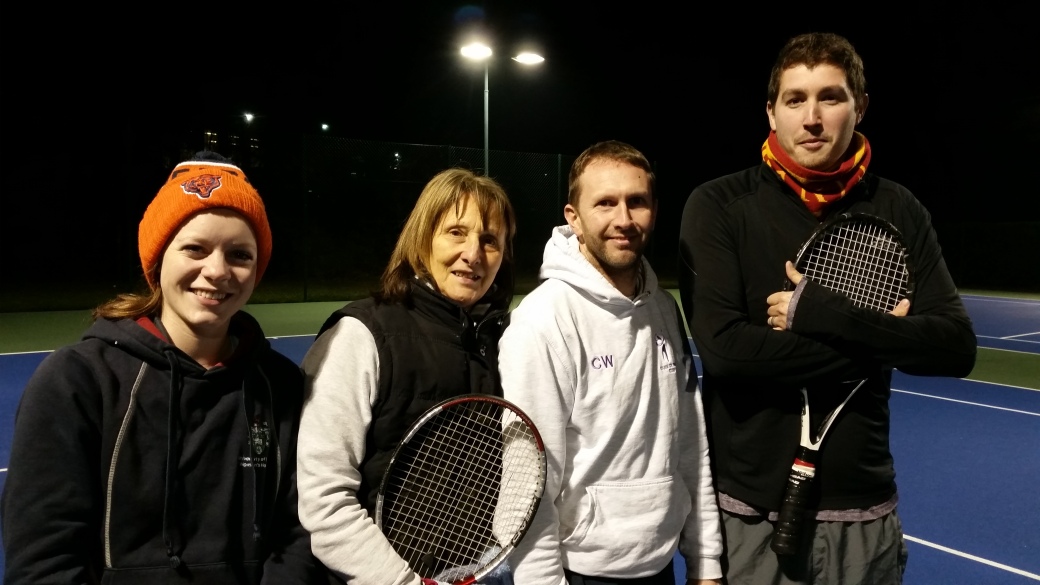 A great effort from the Starbeck quartet who lined up from left to right with Izzy Blower, captain Di Lang, Chris White and Chris Noddings. 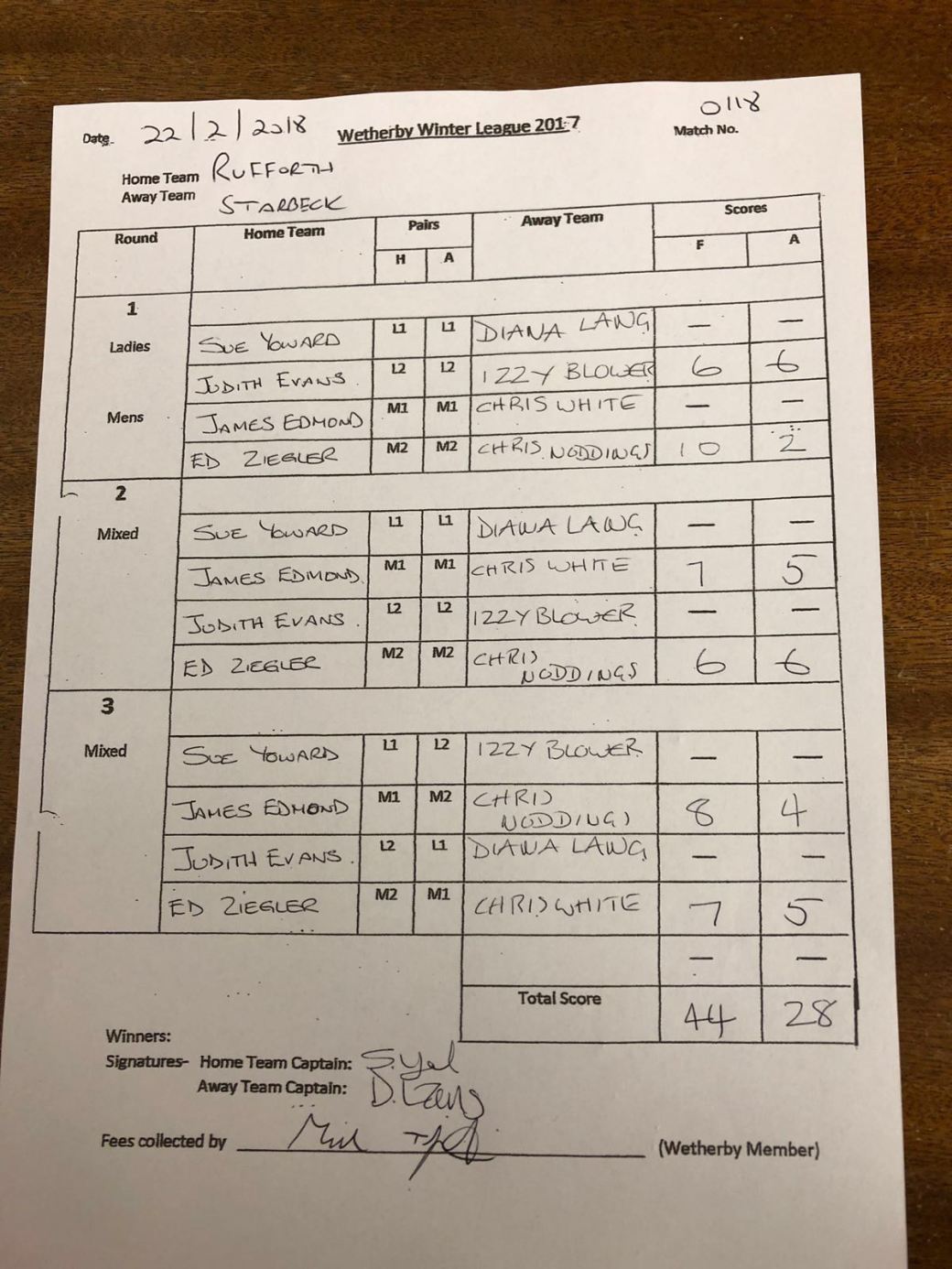