Captain Fiona Chantrey led her troops over to Poppleton on Saturday morning for an early start looking to build on last week’s season opening win over David Lloyd. Trish Bell and Marise Richfield both made welcome returns whilst there was a debut for Louise Beasley.

Chantrey teamed up with regular partner Jill Abel after the pair had posted 22 points together last weekend. They faced the wily and experienced duo Hilary Spencer and Rosie Cantrell and the Wetherby ladies were in for a shock. The home pair proved more than useful and with great consistency dominated front start to finish. Chantrey and Abel had no answer and were beaten 11-1 to give the hosts a great start. Bell and Richfield teamed up at seed two with Bell looking good during a midweek social practise and likewise Richfield, who was still feeling the effects of a nasty hand injury sustained whilst dog walking. However a nice team practise with Barry Johnsons mixed squad on Thursday left her eager for action after passing her fitness test. They faced Sheena Jackson and Pat MacKellar and they couldn’t have been more impressive. Both Bell and Richfield were hitting well from deep and confidently began to take control of the rubber. With a low error count they nicely moved through the gears and looking very comfortable ran out cosy 0-12 winners to quickly get Wetherby back into the contest. Louise Williams teamed up with debutant Louise Beasley who is a welcome and more than useful recruit to the fold. Beasley had looked extremely promising during a Winter League outing and is another who had come through mixed team practise on Thursday with flying colours. They faced the tricky third home pair of Jennifer and Natalie Jones and this rubber proved close. With Williams hitting some great deep forehands, Beasley was content to stand strong at the net and with some deceptive forehands of her own this was developing into an intriguing contest. The Jones girls were also playing very well and at the finish just held the upper hand as they prevailed 7-5.

So as round two commenced the scores were level at 18-18. Abel and Chantrey took on Jackson and MacKellar and were back to their best as they quickly put the first round behind them. The Wetherby ladies took charge early on and with both playing confidently they had too much class and guile to notch an excellent 2-10 success. Bell and Richfield next faced the Jones and knew this would be a step up from round one. They were certainly ready for action and needed to dig deep. The powerful baseline play from Bell was much appreciated and with Richfield producing some lovely floated back hand returns the pair were again on top. They finished with a 4-8 success to keep the Wetherby total ticking over nicely.

Williams and Beasley knew they faced a stern test against the Poppleton leading pair and were looking to post points. They certainly gave everything in defat but Spencer and Cantrell used a wealth of experience to prove too strong and record a 10-2 winning margin.

Leading 34-38 this match was going down to the wire and nerves of steel would be needed to complete the job.Chantrey and Abel were like fine wines and improving as the morning progressed and they arguably left their best form till round three as they met the Jones. This looked a tough match on paper and the visitors were looking to keep ahead in the match but they played some tremendous tennis to really start to forge clear. Chantrey was playing some exquisite disguised forehands and with Abel bossing at the net the ladies turned on the style to leave their shell shocked opponents well beaten 3-9.Bell and Richfield faced their toughest test and would feel the full force of a very impressive top home pair. However Trish and Marise were playing on the crest of a wave and were able to take a useful three so despite a 9-3 reverse Wetherby were still in the driving seat. Williams and Beasley also managed to leave their best performance till last and it was testament to their greater fitness that they were able to dominate their contest against Jackson and MacKellar. They had too much firepower and weaponry for the beleaguered home duo and turning the screw triumphed 3-9 leaving Wetherby deserved victors 49-59.

A match played in damp conditions with an often slippy surface was a test to all on show who deserve applause for some excellent tennis.

Wetherby move alongside Fulford as early pace setters as we go to press with both on four points although it would be a surprise if Rufforth are not on four points too as they fielded a very strong side against Boston Spa today with the score still not known however at present. Its Rufforth who are the next opponents for Wetherby when the old foes meet at Castlegarth next Saturday with a 2-30pm start it what promises to be another cracker. 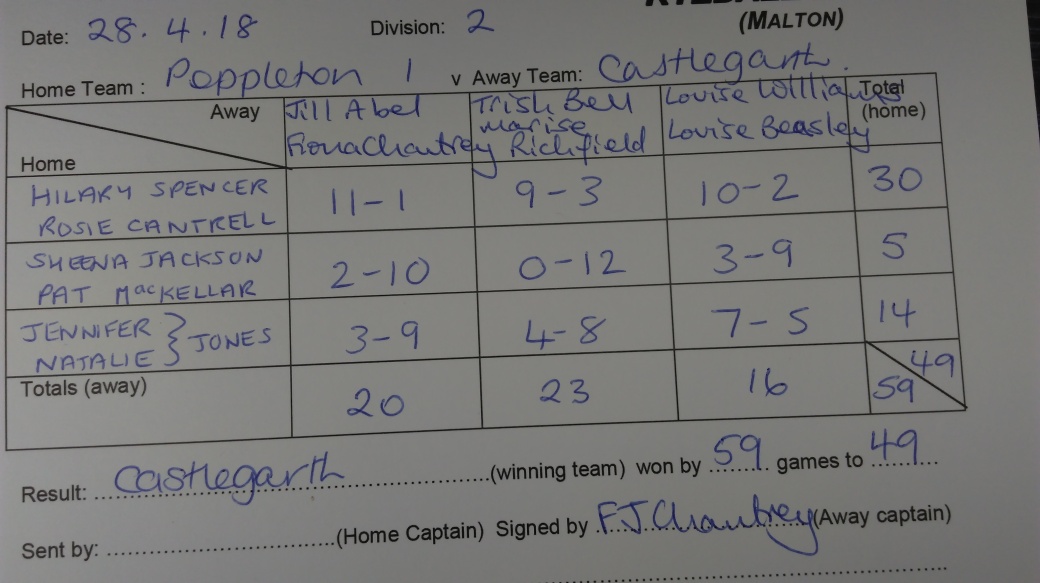