The Harrogate one first team opened their mixed doubles campaign at home this evening as they entertained local rivals Boston Spa at Castlegarth. After light rain late afternoon conditions had improved and the evening was dry and relatively warm. Captain Sue Jacklin was away as was Sue Perkins so regular ladies Helen Robison and Lucy Wright were joined by Yvonne Mannall from York 1.

Mannall and James Landau teamed up on court one as top seeds and this looked a very strong partnership for the hosts. Landau has made a very welcome return to the ranks following a year off with injury and he has added a touch of class to an already strong squad. He and Mannall looked confident but knew opponents Jordan Gregory and Lorraine Pearey would offer stiff resistance. Gregory is a canny player with good court coverage and a lovely backhand whilst hockey player Pearey is all action and a demon at the net. True to form there was indeed little between the pairs but ultimately the excellent serving from Mannall and strong hard hitting from Landau proved the difference as they ran out narrow 7-5 victors. Nigel Williams and Lucy Wright have been an impressive duo for the team and continued at seed two. Wright looked fit and ready for action whilst Williams was showing no ill effects from a number of days spent grafting in the garden! They took on Lesley Haley and Will Parkins in another well matched rubber. Haley is a useful left hander with plenty of experience whilst Parkins is a tall rangy player with a great serve and deadly smash. There was some long rallies with Williams content to test his opponents whilst Wright waited patiently at the net ready to pounce on any wayward shots. This proved an exciting contest and finally honours were equal and a share of the spoils at 6-6 was a good reflection of events. Captain for the evening Helen Robinson paired up with Mike Butterworth with Marc Bickers nursing an injury although it was great to see the magic man cheering his team on from the side lines. The third seeds faced Gordon Milne and Dominique Morrissey. This was an end to end affair with some crafty play by both pairs . However the Wetherby duo looked stronger as the game went on and finally secured an 8-4 success.

So a tight opening round saw the hosts leading 21-15. Wright and Williams came over to the show court to take on the Spa top dogs and once again it was a contest to saviour. Wright and Williams were certainly showing consistency and their patient approach was reaping dividends. However the Spa pair are a wily duo and were proving hard to beat. A successive 6-6 tie was therefore the final score for the hosts but this was certainly a good effort. Robinson and Butterworth were looking to keep the Wetherby scoreboard ticking over although they knew Haley and Perkins represented a tough challenge. Trying to keep high balls away from Parkins was a good tactic but harder to achieve as the Boston man began dominating the net. Robinson was showing some classy short play and with some terrific back hand drop shots was producing some fine winners. Butterworth was hitting hard and advancing well but the visitors were a little too clinical and took the rubber 4-8. Mannall and Landau may have been slow starters during the opening round but moving down to court three they were ready to explode into action and unfortunatly Milne and Morrissey would feel the full force of a dominant display. James was unleashing plenty of bullets from deep and with his serving now on full power he began to dismantle the beleaguered visitors. Mannall was an excellent partner and she produced some lovely deep backhands which pinned the Spa duo deep in their own territory time after time. Unable to stop the onslaught, despite a brave battle, the hosts ran out 12-0 winners to really take control of the match.

Now leading 43-29 Wetherby were now in sight of the finishing line and an opening day success was in their grasp. Robinson and Butterworth would prove dogged opponents for Pearey and Gregory and fought well to take another excellent six points during a 6-6 tie. Wright and Williams may have sensed victory was almost in Wetherby’s hands as they perhaps eased off in their game with Milne and Morrissey who in fairness produced their best form of the evening in the finale. Frustrating the Wetherby duo they produced some unorthodox play to prevail 5-7 for a deserved success. It was left to Mannall and Landau to ice the cake however and the Wetherby top seeds didn’t disappoint as once again they played some lovely tennis against Haley and Parkins. They really did produce some eye catching play and growing in confidence the pair were running through the full repertoire of shots. Spa certainly gave their all in another great advert for the Harrogate league division two but once more the classy Wetherby duo would run out cosy 9-3 winners to ensure a home success 63-45.

Thanks to all on show for some entertaining tennis which kept an enthusiastic crowd enthralled tonight. A good start for Wetherby who will be looking to mount a promotion push proving they can stay injury free this term. Manall and Landau recorded a very impressive 28 but in a super team effort this was an excellent victory and a good platform to build on. The team travel to David Lloyd next Wednesday and return to Scott Lane two weeks today on May 17th when Starbeck A are the visitors. Good luck to Boston Spa and we wish you well in the reminder of your fixtures and look forward to the return in late June. 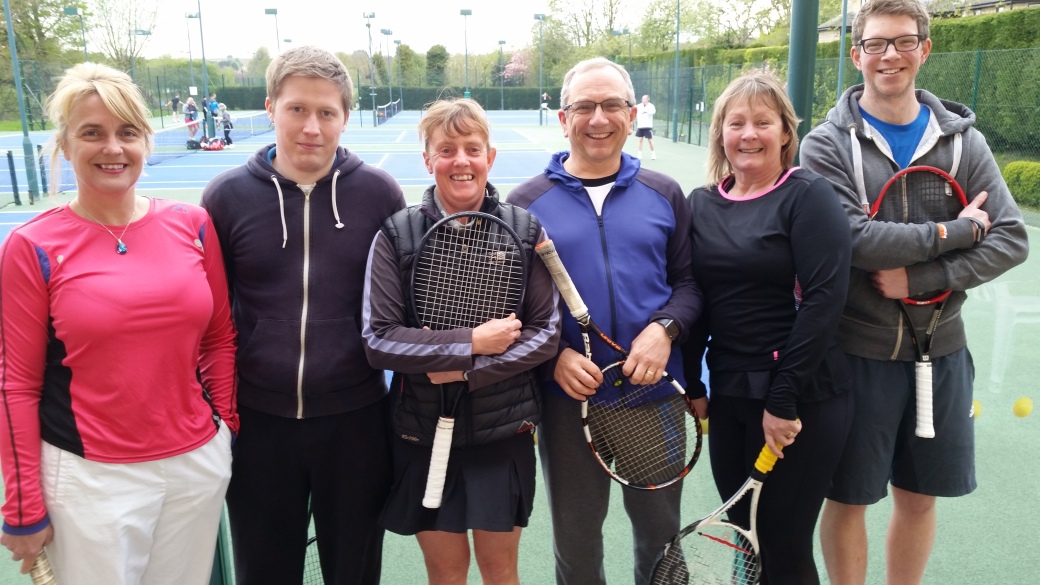 A good crowd on the side lines enjoying a glass of wine watching the action unfold although a bit of sun would have been appreciated of course!

No team photo for the hosts who were all too camera shy!!