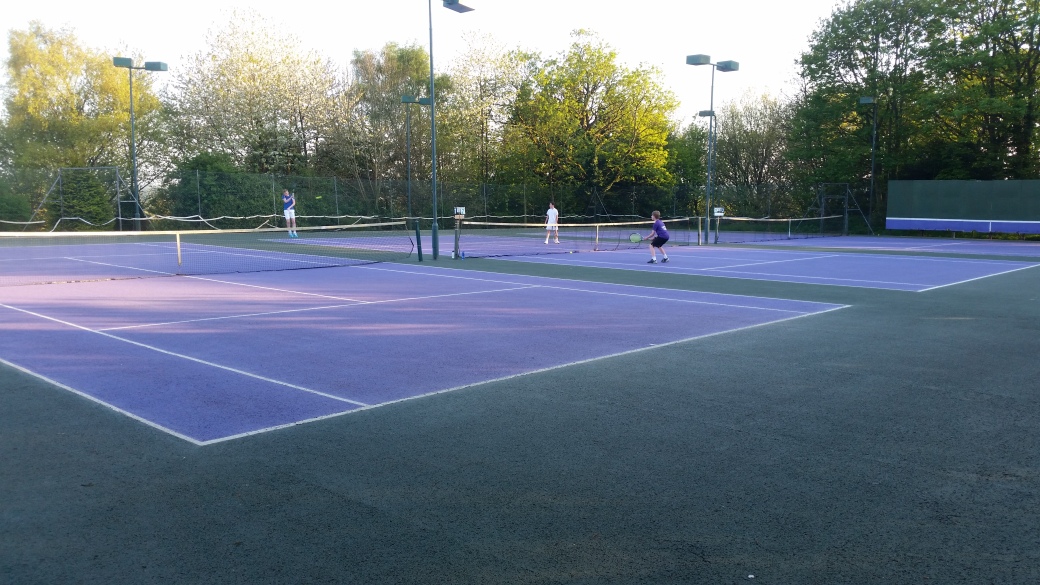 Wetherby U14 began their new season this afternoon in glorious sunshine with temperatures soaring. The team had a fantastic campaign last year when they topped their group and were runners up to the powerful Chapel Allerton in an absorbing final. This year top players Henry Brown and Zak Watson have moved on so the squad will certainly miss the quality of both these two exceptional players.

The day certainly turned out to be interesting both on and off the courts. All the players were caught up in the carnage of several road closures that engulfed Leeds and the surrounding areas due to the Tour of Yorkshire cycle race that all were unaware of. Held up in traffic congestion for as long as 45 minutes the team arrived well over an hour late but thankfully were able to quickly start their respective matches.

First to arrive was Sam Spencer who had been a valuable member of the team last season. He began at seed four and was quickly into stride. Dominating throughout he used his excellent court coverage and fitness to win the opening set 1-4 and was in charge at 0-2 in the second when his opponent retired due to heat exhaustion. Luckily for the hosts Toby Farndon stepped in to replace him for the doubles and Sam was awarded the tie 0-4,0-4 to give the hosts a good start.

Brook Sutton was making his debut at seed three and he faced a baptism of fire as he took on Sam Farndon. Despite a spirited effort Sutton found life difficult and this was a good introduction to league tennis at this level and the requirement needed to be competative.He fell 4-0,4-0 but still came off smiling.

George Potts is a useful player for Rawdon and he entertained the left hander Gabe Mead. This had the look of an exciting rubber and certainly in the first set there was little between the players before Rawdon ran out narrow 4-2 winners. However Mead struggled in the second as Potts took control and playing some lovely tennis ran out a cosy 4-0 winner to take the rubber and put the hosts ahead 2-1 overall.

Captain Bradley Triffitt stepped in at seed one and he was on the show court against the Rawdon top dog Morgan Hainsworth. Triffitt had literally stepped out of the car straight onto court and without a warm up was straight into battle. He held serve impressively and this contest was very much catching the eye of a decent sized crowd who watched as both players began hitting big from deep. Wetherby U14 coach Josh Bayliss would have been proud of his protégé as Triffitt continued to play extremely well holding his serve and even producing some excellent back hands. He took the opener 2-4 and quickly led in the second not allowing the Rawdon youngster any chance to mount a comeback. With the heat beating down on Court One both players did extremely well but it was Wetherby who took the rubber as Triffitt completed a successive 2-4 success to level up the match at 2-2.

Plenty of drinks and sun cream was the order of the day and at this stage it was going to be hard to call a winner. Suitably refreshed the chaps were back out to battle with the Farndon brothers taking on Sutton and Spencer on the cooler court three which was nicely shaded. The hosts had a nice combination and with great teamwork they looked confident together. The Wetherby boys couldn’t match the hosts intensity and despite some long rallies it was the Leeds based club who ran out victorious 4-1,4-1.

All eyes turned to Court Two which was shadier then Court one for the finale with Wetherby needing the win to salvage a point. The hosts started slight favourites based on the singles games but Triffitt and Mead looked ready to square the game with the right hand / left hand combination proving a useful tool. Once again Triffitt was serving well and with no double faults held serve throughout once more. Wetherby were playing with great consistency and with the chaps happy to prolong rallies to avoid errors they used great tactics to take the opener 2-4. Tension was mounting both on and of the courts with the stakes high but thankfully the Wetherby duo were not letting up. However they found themselves 3-0 down as Hainsworth and Potts cranked up the tempo and the tie seemed to be heading for a third set decider. Mead suddenly sprang into action and producing a series of memorable forehands started pinning the hosts back whilst Triffitt was starting to dominate the net and with the benefit of many hours spent at Adult social was starting to turn the screw. Wetherby were suddenly looking unstoppable and reeling off five games on the bounce celebrated as if this was the Wimbledon doubles final as they completed a remarkable 3-5 comeback victory to ensure the match ended all square at 3-3.

Thanks to all the players and the hospitality shown by our hosts today . A draw was a fair reflection of events and both teams take away a lot of credit. I would imagine all the lads will sleep well this evening after their considerable efforts.

Wetherby are back on the road next week when they visit Sandal in Wakefield where they will hope for less drama on the roads! 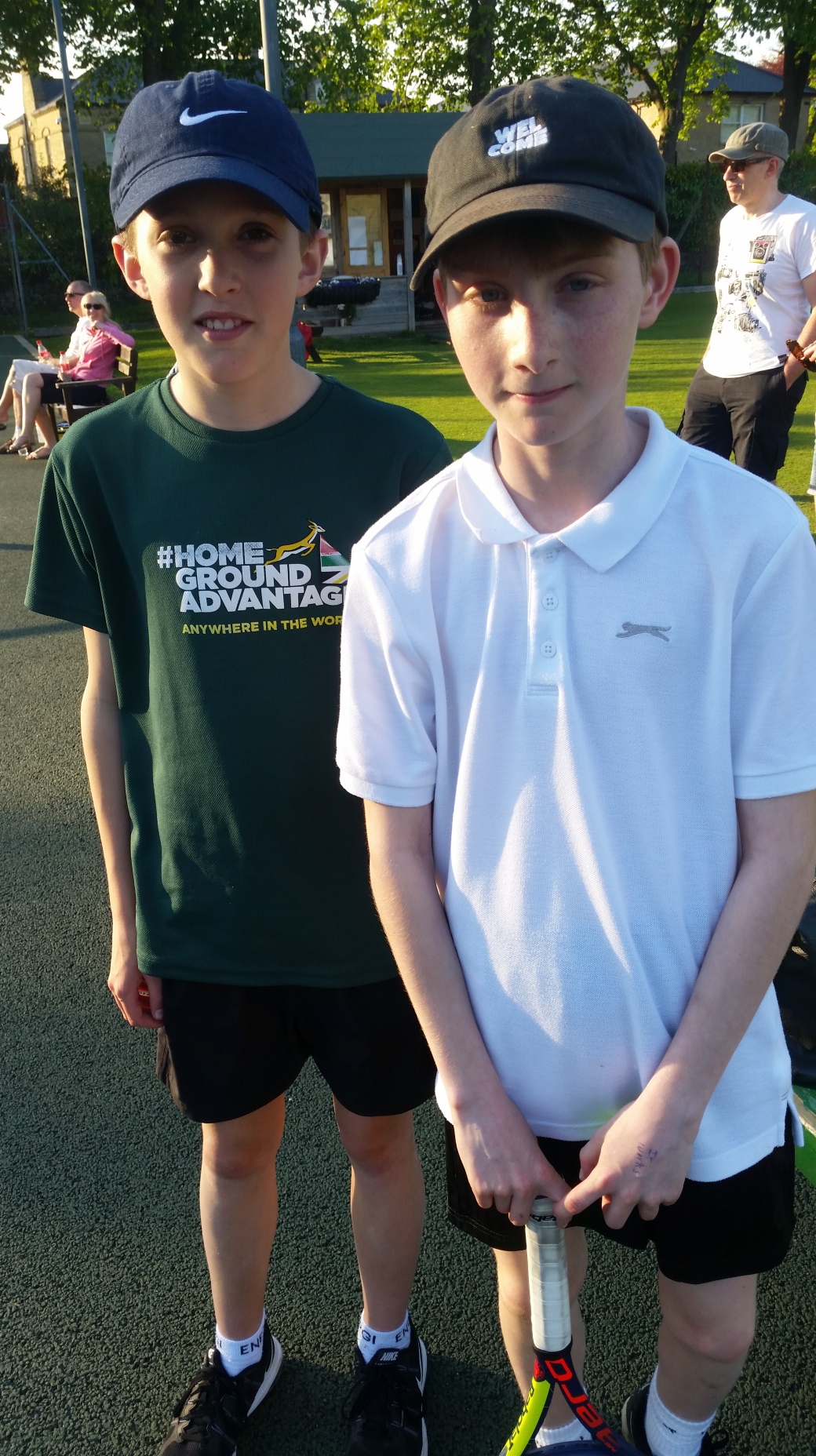 Well done to Brook Sutton and Sam Spencer for their great efforts today.

Bradley Triffitt and Gabe Mead looking cool after a fantastic win in the doubles to earn Wetherby a point from an overall drawn match.

Thanks to all the enthusiastic parents and siblings who supported the team today and parent captain Mike Triffitt who organised and ensured the match was completed in full.