The York 2 mixed team led by captain Jill Abel opened their new season Wednesday evening when they travelled to Copmanthorpe in a repeat of last season’s opening fixture. That time the Miraculous Jonny Kay single handily inspired the hosts to success but thankfully he was not on show yesterday. However both teams picked from strength and as both clubs had finished tied on 18 points in third place last term this promised to be a fascinating early clash.

Sam Moore and Stewart Robinson were missing for the visitors with men’s first team stars Rob Payne and Paul Godden drafted in.Payne and Jo Coverdale began at seed one and they quickly gelled to recorded an impressive 4-8 victory over the Copmanthorpe top dogs. Payne used his aggressive game to produce some excellent smashes and with the ever dependable Coverdale covering every inch of the court making some lovely returns, the duo were impressive. Godden paired with Abel and the big serving hard hitting giant was enjoying a rare taste of mixed doubles. His large frame certainly helped intimidate opponents but this proved a very tight and well contested affair between two solid pairs. Abel used her experience and continued her excellent early season form with the ladies second team proving hard to pass and the pair were playing some lovely tennis. However with the hosts also strong this rubber Couldn’t be split with a 6-6 tie a fair reflection. Mike Abel and Angie Bell completed the line up and gave the team a strong look as this duo at seed three are a match for most in this section. They were quickly away and with Bell hitting hard as always from deep and Mike here, there and everywhere, the Wetherby couple totally bamboozled their bewildered opponents and recorded an eye catching 2-10 success.

A 12-24 first round lead was therefore a super start and as round two got underway the visitors were brimming with confidence. Payne and Coverdale couldn’t quite match their opening round exploits but a narrow 7-5 reverse was still a good effort and kept the Wetherby score ticking over nicely. Abel and Godden added another 6 for a second consecutive draw whilst Bell and Mike Abel took the scalp of the home top pair 5-7 which left Wetherby ahead by 12 leading 30-42.

The winning line was very much in sight therefore as the concluding round began and a narrow 7-5 loss for Payne and Coverdale still meant the gap was 10. The consistent Jill and Paul managed a third 6-6 tie and a great 18 points on the night to match Payne and Coverdale and it was left to Bell and Mike Abel to put the icing on the cake with an emphatic 3-9 demolition of the hosts number two pair which left them with a superb 26 in helping Wetherby run out deserved winners 46-62 winners.

This was a very impressive team performance and certainly lays down a good marker in the section. Wetherby made a slow start last year but were finishing like trains at the end so a good start this time around could well see them challenging for promotion.

Well done to all on show and good luck next Wednesday when the team are once more on their travels away at Cliffe who were relegated from division three last season but who opened with a 62-46 victory over Poppleton last night. 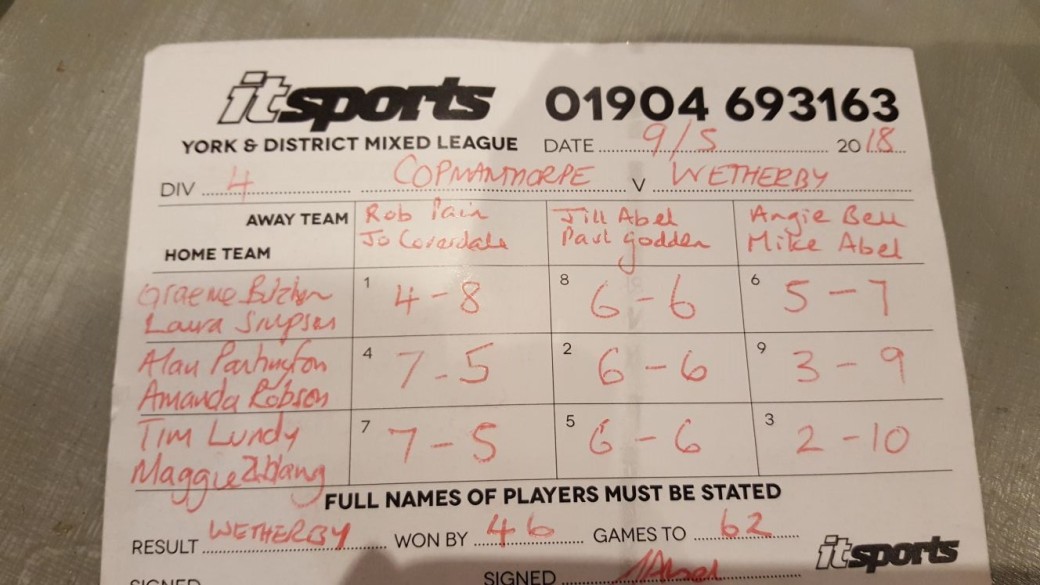 Harrogate 1 mixed opened with a win over Boston Spa at Castlegarth last week and last night they travelled to Harrogate to take on David Lloyd A. The hosts had also won away at Starbeck in their season opener and were looking to mount a promotion assault after relegation last year. With courts been resurfaced outside the match was played indoors although with only two courts available the format was a reduced one at 12-8-8.

Wetherby were missing key men in James Landau and Nigel Williams and knew this would be a difficult fixture. Despite the best efforts of those on show the hosts just carried a little more threat and using the fast surface to great effect they proved too powerful in running out 49-35 winners.

Wetherby return back to Scott Lane next Thursday when Starbeck are the visitors in what is always a tight and well contested encounter.