Wetherby B had lost their opening two fixtures but were confident of success as they welcomed old adversaries Burton Leonard to Castlegarth this evening. After a glorious day conditions were still lovely and with the sun out it certainly made for enjoyable viewing for a good crowd gathered on the side lines. Captain Ian Teasdale rested himself but with the wine flowing in the stands he seemed happy to be a bye stander!. Burton Leonard also arrived following two defeats so something had to give tonight.

Anne Lillywhite teamed up with Richard Franks at top seed after the duo had looked promising last week at David Lloyd. They certainly were showing good team work and with both hitting hard from deep their match with Burton top dogs Nick Coates and Angela Crawshaw proved exciting and hard fought. Captain Coates has been a regular for Leonard over the years and always plays with a smile on his face and is always great entertainment. This contest was always going to be close and so it proved before Wetherby sneaked home narrowly 7-5. On court Two the experienced Doug Harrison paired up with Janine Smith and with a pre match cider Smith looked calm and eager for action. Fellow wine tasting organiser Harrison is not adverse to the odd tipple either and the duo were in high spirits as they began battle with mother and son Caroline and Robbie Barr. Another rubber that looked too close to call was very well fought out with Harrison as always so crafty and Smith loving the many opportunities she was getting at the net. Time after time strong work from Doug allowed Janine to plunder at the net with some terrific volleying and the pair were growing in confidence. However the Barr’s were also playing well and proving a handful finally were able to share the spoils from an enjoyable 6-6 draw. Ann Jones and Tony Cutler continued their partnership at seed three and these veteran league players were certainly no strangers on court. With a good understanding the pair have performed very well this season and tonight was no exception. They faced Liz Parker and Sam Crawshaw and once more this was also a very close game. Cutler was using his famous spin to good effort and the Burton pair were struggling to cope but with Sam a big hitter he began to exploit the space to hit some nice winners. Jones as always was up for a battle and with some great court coverage and soft touches she and Cutler were narrow 7-5 winners to give the hosts a 20- 16 opening round lead.

Smith and Harrison then took on the Leonard top pair and continuing in the same vein with a well thought out game plan they managed to record a very useful 7-5 success that edged Wetherby further ahead. Jones and Cutler were keeping things tight against the Barr’s although the visiting pair just seemed to have the upper hand and ran out close 5-7 victors. However the game breaker was taking place on court three as Lillywhite and Franks could not put a foot wrong as they really turned on the style against Parker and Crawshaw. Both hit hard but with a low error count they were both hitting the sweet spot time after time and with Franks determined to return every shot that came back the duo really were in irresistible form. An incredible 11-1 success in such a tight match was a fantastic achievement and suddenly Wetherby were in the driving seat leading 43-29.

With a 14 point advantage as the final round began Wetherby knew what was needed and each pair looked determined to keep things tight. Jones and Cutler were happy and comfortable as they entertained the show court spectators and some eye catching tennis from both pairs had that crowd on the edge of their seats. Never much between the quartet Burton took the rubber 5-7 which still left Wetherby well ahead. Smith and Harrison were looking comfortable too as they played no nonsense tennis against Parker and Crawshaw. The youngster was forcing the pace but struggled with the Harrison short game and with Smith still poaching at the net the pair celebrated a 7-5 victory and an excellent 20 points on the evening. Lillywhite and Franks couldn’t repeat their second round heroics but it wasn’t needed as they kept the Barr’s at arm’s length. Once more there really was little between the pairs with Wetherby edging home 7-5 to complete a 62-46 overall success to great delight.

Aside from the 11-1 score all the other rubbers had a winning margin of just two points which was a credit to all on show and made for interesting viewing all round. Well done to both teams and Wetherby will now hope to kick start their campaign and move away from the drop zone.

They host unbeaten Mashamshire next Sunday with the visitors boosting two wins ahead of their home clash with another unbeaten outfit Starbeck C this Tuesday. 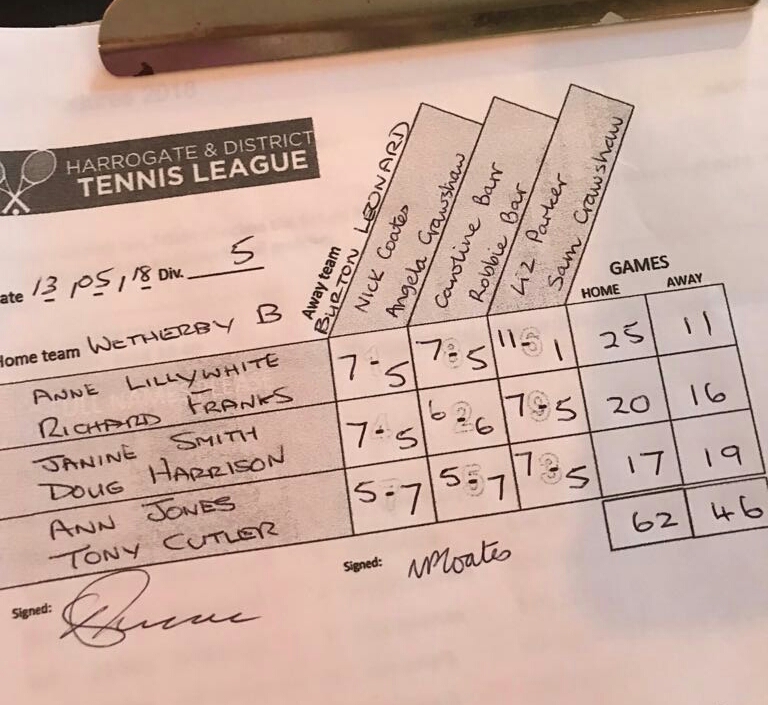