Jill Abel took her York 2 mixed side down to Cliffe on Wednesday night which looked sure to be a tough encounter. The hosts were unlucky to be relegated from a very competitive Division Three last season and after opening with a home win over Poppleton were looking for a second consecutive victory.

Wetherby arrived after an excellent win at Copmanthorpe and with a strong squad this season hopes are high of a successful campaign.

Stewart Robinson came in for his first start of the season and was thrown in straight at seed one to partner in form Angie Bell. They faced a tough first rubber with Jane Pemberton and Joel Hancox however and despite some aggressive hitting from Bell and some lovely backhand short play for Robinson the Cliffe top dogs were proving a real handful. However an 8-4 reverse meant nothing was lost in defeat and the visiting pair knew they wouldn’t face anyone quite this strong in the subsequent rounds. With Mike Connolly and Sam Moore still absent chairman Steve Jones was drafted in and he teamed up with Abel at seed two. They faced David Tomlinson and Janine Walton is what turned out to be an intriguing contest. Jones served well and with his excellent spinning ground strokes causing mayhem in the home ranks he was certainly enjoying himself. Abel was ever dependable and with strong net presence and good court awareness the Wetherby duo were on top. They fought hard throughout and were delighted to record a worthy 4-8 success. Mike Abel is a strong competitor and more than useful at this level and he paired with Jo Coverdale who is improving each week after injury and has been an excellent recruit for the team this term. They faced Mary Smith and Terry Sauagf and once again there was little between the quartet. This was always going to be a match were every point would be crucial and hard fought and this game proved no exception with some backs to the wall defending from both teams. Finally a 4-8 success for Wetherby left them leading 16-20 after completion of the opening round.

Bell and Robinson then took on the Cliffe second pair and no surprise this was yet again a close and tight game. Some absorbing tennis was played from both couples and fittingly after such a tight match honours were even at 6-6. Mike Abel and Jo Coverdale knew they would be severely tested against the hosts leading couple and they were well organised and strong from the start not allowing the hosts to turn the screw. Both Wetherby players gave everything and a 8-4 loss meant a useful contribution still to the Wetherby total. However after a series of competitive and too close to call encounters Jill and Steve took the opportunity to put the visitors in the driving seat as they looked determined to rack up the points against Smith and Sauagf. Jones was using his men’s first team class to great effect and simply had too much weaponry for the beleaguered hosts. Abel too was dominating and the pair were irresistible in running out comprehensive 2-10 winners which suddenly gave Wetherby some daylight leading 32-40.

Once again though Pemberton and Hancox proved a tough nut to crack and playing with great consistency they adopted their style to cope with whatever Jones and Abel could through at them to run out impressive 8-4 winners and make it an impressive 24 points on the evening. The match was now on an knife edge and tensions rising as the stakes were high. Mike and Jo were digging deep against Tomlinson and Walton and chasing everything down they battled to a crucial 6-6 tie which kept Wetherby ahead. This time it was Bell and Robinson who were ensuring Wetherby would not be denied as they left their best till last as they both turned up the power against the home third duo. Bell had far too much hard hitting for them to cope with and with Robinson quietly efficient it turned out to be a well drilled performance that saw the pair record a 3-9 victory and ensure Wetherby would indeed maintain their 100% record following a 49-59 victory.

Once more a very impressive team effort secured the points and takes the team top of the very early table. Wetherby entertain newly promoted Tollerton next Tuesday at Castlegarth hoping to keep the momentum going and retain leadership of the section. 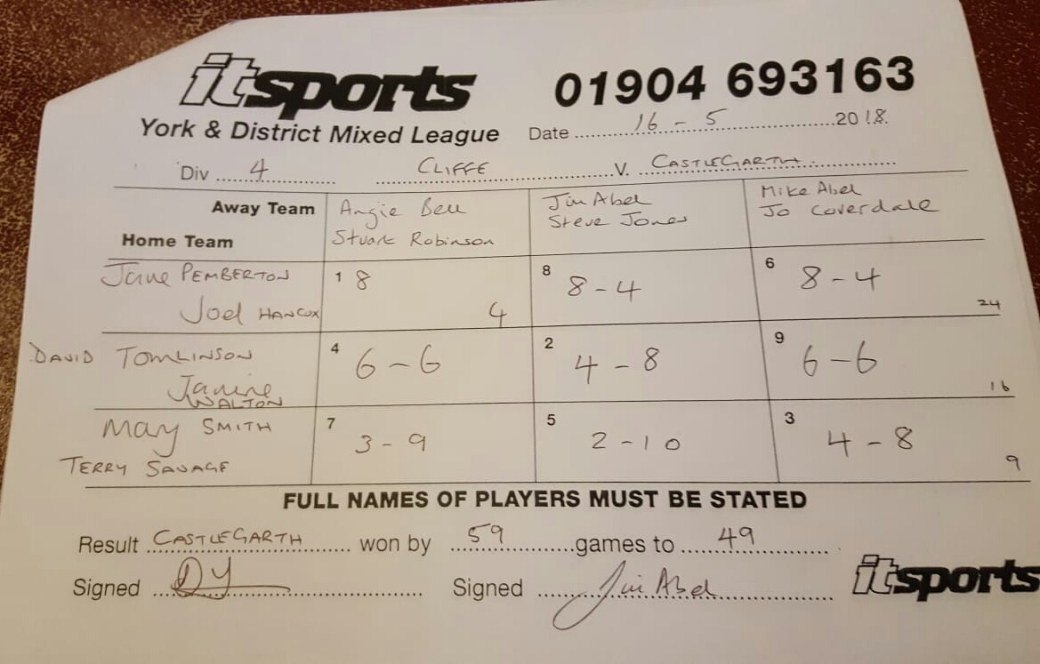