Wetherby C were in action this evening as they travelled to David Lloyd C for an Autumn Cup clash as underdogs. This is a new event organised by the Harrogate League tennis association to conclude the summer programme and has been the brainchild of organiser Mark Hinchcliffe. Wetherby arrived on a beautiful evening and with conditions perfect for tennis on the hosts new impressive outdoor courts. Captain Richard Franks teamed up with U14 captain Bradley Triffitt in the men’s rubber and regular Summer league partner Anne Lillywhite in the mixed whilst Katie Barrett paired with Triffitt. For the hosts they selected from strength with Kjeld Rasmussen and Sarah Stoner alongside Mark Bowman and Andrea Bethell with all four regulars in Division Five of the Summer leagues.

Rasmussen and Bowman took on Franks and Triffitt on court one in the men’s doubles and this proved a fierce clash with some fantastic tennis on show. Rasmussen is an excellent server and dangerous at the net whilst Bowman likes to float around the court and produces plenty of winners. Franks was content to play his usual baseline game whilst Triffitt was enjoying good success at the net. Franks was showing no ill effects from two matches in the Wetherby end of season tournament the night before where he was successful twice in back to back matches. There was a number of well executed winners from both pairs and in a competitive heat David Lloyd just proved the stronger as they ran out cosy 6-2,6-2 winners to take a 2-0 lead. Over on court two Wetherby ladies Anne Lillywhite and Katie Barrett were quickly into stride looking to reduce the overall deficit. The pair, who played many times for Wetherby also in division 5 as well as featuring for the ladies third team together, were in irresistible form as they raced away with the opener winning 1-6. The second set proved far closer and with David Lloyd digging in this went down to the wire. Eventually Wetherby held their nerve to record a 1-6,4-6 victory to leave the match finely poised at 2-2.

Rasmussen teamed up with Stoner on the showcourt and they took on Franks and Lillywhite. This proved a fascinating watch with the great teamwork of the Wetherby pair certainly to the fore. Franks was electric chasing every lost cause and with left hander Lillywhite hitting with venom they took the first set 3-6.

Over on court 2 Triffitt and Barrett were also playing extremely well and with Triffitt combining hard hitting from deep with some dominant net play the duo were enjoying themselves. Barrett is a very consistent player and with an amazing reach she was making some crucial winners. Bowman however responded with some impressive hitting of his own and with Bethell showing why she was the leading female for David Lloyd during the summer campaign this was another close battle. However the visitors were not to be denied and took the set 3-6.

This left Wetherby in a strong position knowing just one more set was needed for victory but back on court one Kjeld and Sarah were upping the tempo and beginning to take control. They showed great strength to level at 6-4 leaving the tie on a knife edge. Thankfully for Wetherby Triffitt and Barrett were showing nerves of steel as they continued to produce the winners and with great teamwork and determination they began to pull clear. They completed a 3-6,2-6 success to guarantee that Wetherby would progress into the next round. Anne and Richard were keen to take the third set tie breaker and as both pairs produced more breath taking tennis it was Wetherby who won 6-10 to finally run out 1-3 winners. Their reward is another away tie at Harrogate Racquets C.

A big well done to all on show for a memorable evening of tennis and thanks to David Lloyd for been excellent hosts. Captain Franks with Anne Lillywhite showed why they had enjoyed such a tremendous season despite relegation for Wetherby during the summer and really did impress. Bradley Triffitt on debut was calm, relaxed and produced a number of crucial winners whilst a big thanks is reserved for Katie Barrett who stepped in late with almost 20 ladies unavailable and made a real sacrifice to turn out this evening which was very much appreciated.

Good luck in the next round and congratulations on a fantastic success . 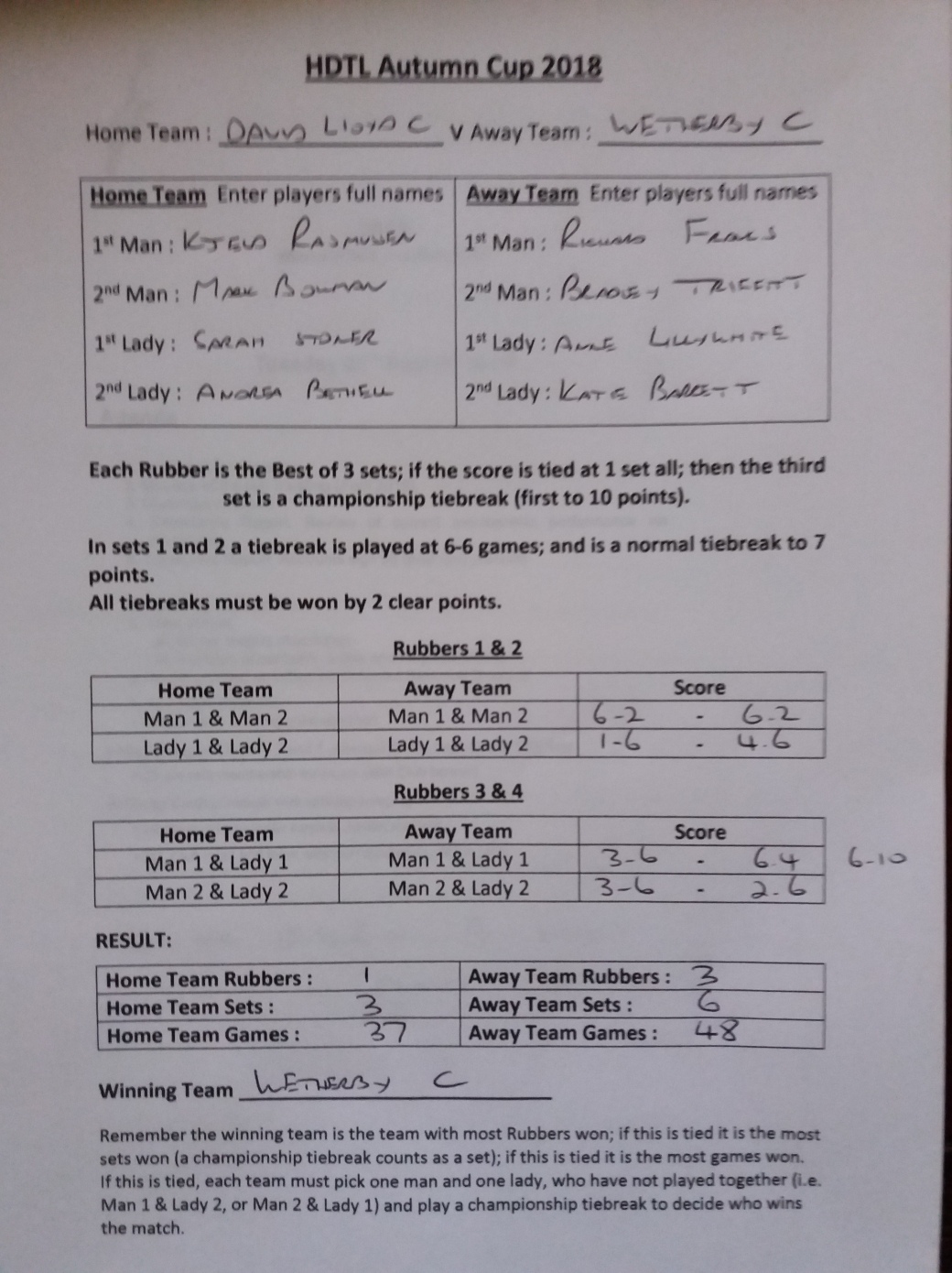