Wetherby had seen Starbeck retake ownership of the leaderboard when beating Collingham last week and needed success this evening to jump one point clear. On Court Three Wright and Jones were quickly away and soon demonstrating their power and finesse against Quigley and Graham. The Boro pair will more than likely be particapating in Harrogate Mixed Summer League Division Two this campaign and saw at first hand what class of opponent they will likely meet in the experienced Wetherby top seeds. Wright was her usual all action self, covering every inch of the court and happy to exchange long rallies from the baseline whilst Jones waited to pounce at the net and with some lovely clever touches executed some crafty winners. Tony was hitting hard from deep and serving well and with Natasha also happy at this level and looking strong this was certainly a good contest played to a high level. However Lucy and Steve are a strong duo and one of the Winter Leagues leading couples and they carried too much weaponry for their Boro opponents finally running out impressive 9-3 winners.

On Court Two Roger Fawcus was in action and he made his debut with the ever improving and eye catching Louise Beasley. The two had only met on court shortly before play commenced but were soon gelling and forming a nice pairing. However Jeannette and Andy are a standing dish when it comes to partnerships and have enjoyed many hours in one another’s company over a number of years. This turned out to be a real close affair with both couples producing some lovely winners. With Roger and Louise adopting an all out attack against the defensive and careful play of Jeanette and Andy, this was indeed a contrast of styles and it meant a fascinating contest ensued. Fawcus was having success with some very quick serving and Beasley was certainly enjoying herself at the net as she dispatched a number of volleys away with consummate ease. Eventually Wetherby managed to secure an 8-4 victory in a well fought battle.

So with round one complete the hosts led 17-7 and were pleased with their opening form. Steve and Roger teamed up in the men’s and were certainly no stranger to one another’s game. Roger has been a welcome addition to the Winter League scene for Wetherby this season and Steve’s return from injury has given the squad some real class. They took on Tony Graham and Andy Little with another exciting match on the cards. The Boro men were certainly not going to lie down and were producing some quality winners but Jones and Fawcus looked unruffled as they happily went about the task in hand. Roger continued to serve with real venom and the slight of touch from Jones was exquisite. A really enjoyable game for the watching galleries with Wetherby 8-4 winners at the conclusion.

The ladies also served up a treat with some more tremendous tennis on show. Wright and Beasley have played on many occasions on the social scene but this was a first competitive league outing for the duo but they strode on court confidently. This proved a more than useful partnership with Wight continuing to do plenty of hard work at the baseline and Beasley ever so clinical at the net when opportunities arose. Bowden was battling away for Boro and giving her all whilst Quigley is a classy sort with some lovely shots in her game. However the extra power from the Wetherby ladies was always going to put them in a strong position and with superb teamwork they began to assert and run out winners 10-2.

Wetherby were now well on their way to victory leading 35-13 as the final round began. Louise and Roger knew they faced a tough ask in containing Boro top seeds Tony and Natasha and so it proved as the visitors saved their best form for the finale. The pair were in splendid form with some top class tennis and with great consistency they were enjoying themselves. With Roger and Louise not able to force enough winners and a few errors creeping in, they left themselves an uphill task especially as Tony and Natasha were maintaing a very high level. This turned out to be another well fought rubber but it was Knaresborough who took the honours 4-8.

Lucy and Steve were making sure the Wetherby scoreboard continued to tick over nicely in their clash with Andy and Jeanette however as they showed no mercy and once more maintained a very impressive level of high quality tennis. Both these competitors always give it everything and this proved an irresistible combination as they produced many a well executed winner. It was harsh on the spirited Boro pair who kept fighting to the death but they came upon a red hot Lucy and Steve who looked intent on securing maximum points. They did eventually run out 12-0 winners which capped an amazing night for Wright, who in contributing a wonderful 31 point haul, was in sensational form which bodes well for the Summer season.

In a game played in excellent spirit and good sportsmanship a big thanks to all on show for providing some excellent entertainment. Wetherby move a point clear at the summit and with Starbeck v Boroughbridge postponed Thursday, this sets up a mouth watering top of the table clash a week on Thursday February 21st between the top two sides when hopefully a big crowd will be present to witness the action unfold. 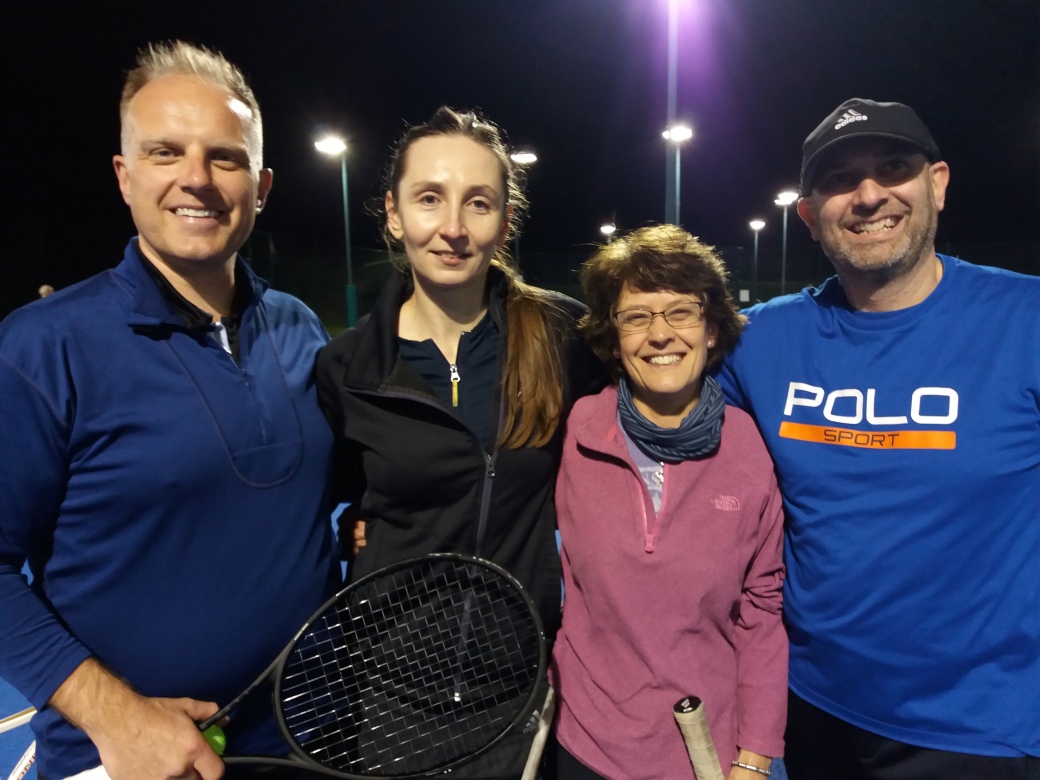 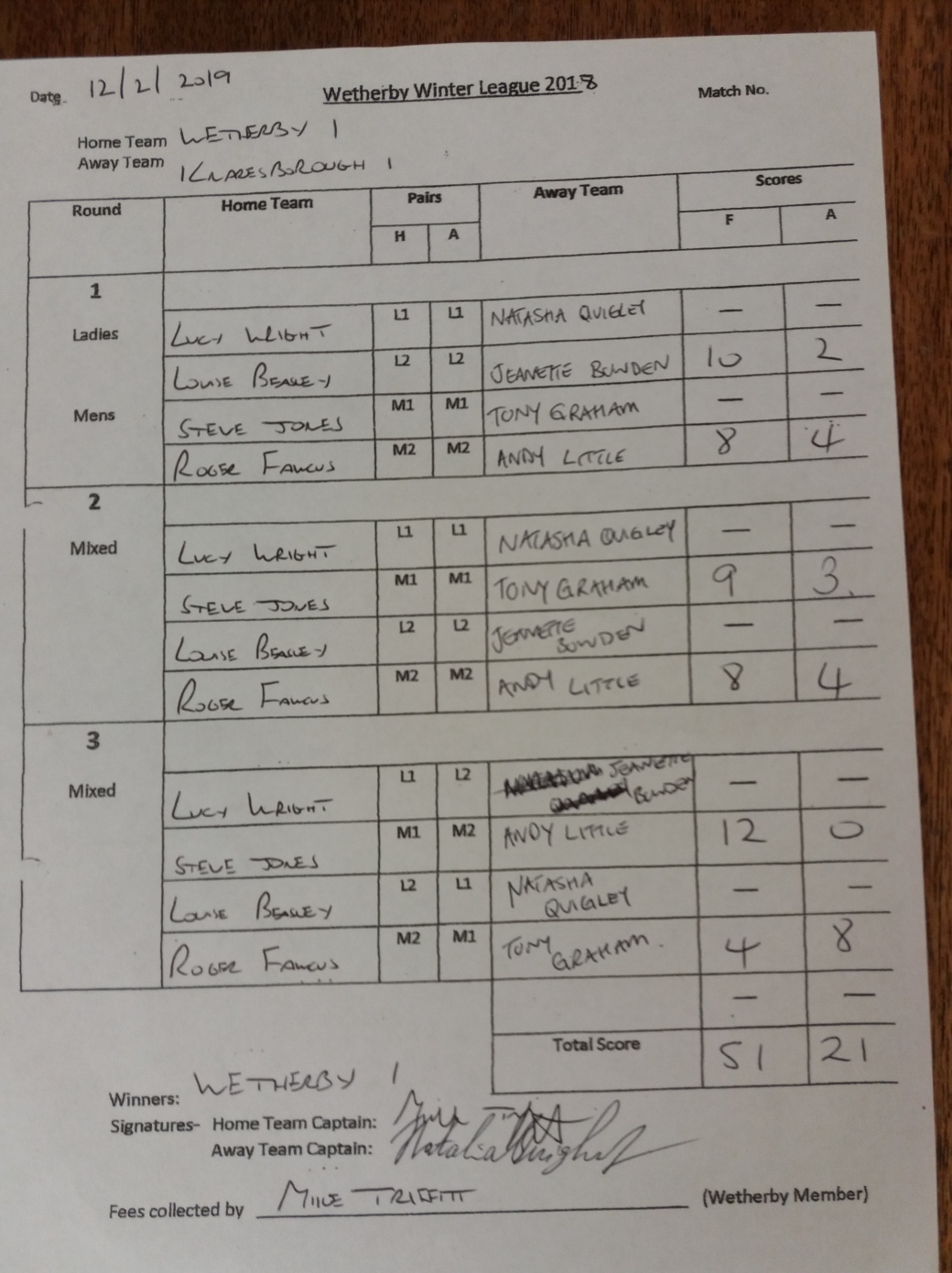