It may have been Valentines but this wasnt going to stop the Winter League and a big thanks to Wetherby 2 and Rufforth for this hastily arranged fixture which took part this evening. Another warn dry night for February and with conditions perfect the current Winter League holders were looking to move up to third in the table with victory.

Captain Phillipa Page arrived with Dan Russell whilst the evergreen duo of Andy Ival and Christine Place completed the quartet.

For Wetherby captain Richard Franks was joined by Anne Lillywhite whilst Bradley Triffitt and Ann Jones played at seed two.

Franks and Lillywhite entertained Page and Russell on the show court and this turned out to be a very close and well matched affair. Richard and Anne had enjoyed a good summer season together and despite relegation from Harrogate Division Five they were one of the leading duos. Likewise Philippa and Dan had a good season in York Division Seven where they were the second strongest partnership in that section. Therefore team work was certainly to the fore here which resulted in some excellent long rallies and points well earned. Wetherby started impressively with Franks as always covering all the court and hitting well from deep. Lillywhite was hitting some tremendous forehand winners with her fierce left hand and the pair quickly opened up a useful 5-1 advantage. However Rufforth came storming back and with Phillipa comfortable at the net and Dan hitting with real venom from the baseline they started a comeback. With some exciting tennis this rubber went down to the wire before the hosts prevailed narrowly 7-5.

On Court Two Bradley Triffitt and Ann Jones faced a tough task against the very experienced and canny pairing of Andy Ival and Christine Place. Both had enjoyed good seasons with Rufforth in York Division Five and only missed out on promotion by a solitary point. Andy is a strong server and with a very low error count keeps the ball in play well whilst Christine is tremendous at the net with many well placed winners leaving her opponents bamboozled. Bradley was hitting well from the baseline and smashing confidently at the net to keep the visitors on their toes whilst Ann battled way keeping many rallies alive with some good recovery play. However as the rubber wore on it was the visitors who were beginning to turn the screw and clinching all the crucial points were starting to move clear. Brad and Ann battled away manfully but didnt have the consistency of their opponents who impressivly ran out 2-10 winners to give Rufforth a 9-15 advantage after the opening round.

The two Anne’s were quickly into action in the Ladies rubber and used their Ladies Third team experience together to certainly give an excellent account. This was another hard fought and close match and with Lillywhite hitting some screaming returns Wetherby were well in the contest. Jones was returning well and hitting some lovely cross court efforts. However Christine continued to dispatch some incredible well placed winners taking the pace off the ball time and time again. Philippa was everywhere on court chasing many a lost cause and eventually Rufforth prevailed 5-7 after a thriller.

Court One also witnessed a fascinating affair with Richard and Bradley enjoying their workout against Andy and Dan. There was some lovely exchanges from deep and some tremendous wide angles achieved from all the players. Dan and Bradley were both confident at the net smashing some big winners and at 4-4 this was always going to be close. However the visitor’s once more just had the greater consistency and held their nerve for a 5-7 success after a cracker.

So Rufforth went into the decider having built up a 19-29 advantage and the hosts were left looking for a miracle. However this was certainly no Valentine’s day massacre and Richard and Anne Lillywhite came out all guns blazing on court two against Andy and Christine. Unfortunately the Rufforth pair were showing no signs of easing up and efficiently set about maintaining their advantage. Despite some wonderful play from the Wetherby duo they were unable to crack the Rufforth pair who were deserved 4-8 winners.

Bradley and Ann Jones were enjoying their final rubber on the Show court and making a fist of things against Phillipa and Dan. At 2-2 they had hope but then the Rufforth pair upped the tempo and with Dan continuing to hit so well, creating some fabulous angles, the writing was on the wall. However the Wetherby pair enjoyed plenty of good moments of their own and the games were well contested throughout. However the hosts couldn’t convert the big crucial points and finally went down 4-8.

Rufforth therefore ran out 27-45 winners and jumped three places up to third in the table as they seek to retain their crown. Thanks again to all on show for providing an excellent evening of entertainment played in a lovely spirit. 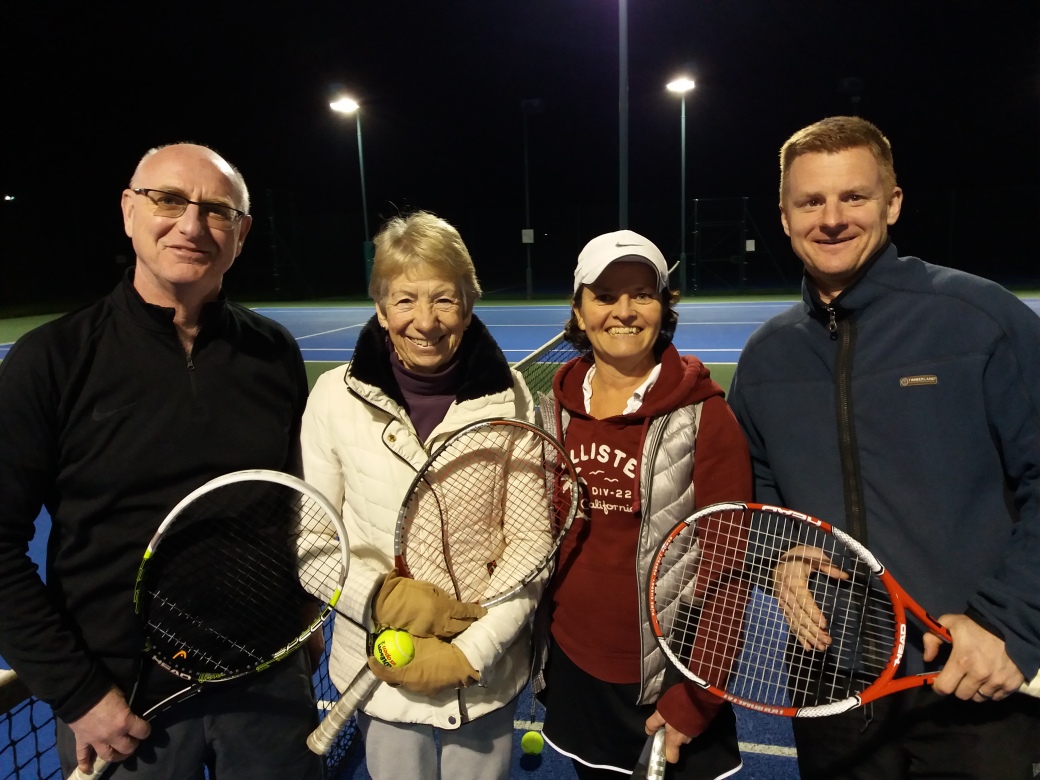 Congratulations to the champions who lined up from left to right with Andy Ival, Christine Place, Philippa Page and Dan Russell.