On Thursday February 26th Wetherby 1 hosted Collingham looking for the victory that would see them be crowned Winter League champions. With the visitors sitting at the foot of the table after just the one success this term it gave Wetherby a great opportunity. Steve and Christina Plant have been a welcome addition on the Winter League front this season and teamed up once more whilst Barry Johnson stepped in at captain and was joined by Fiona Chantrey. Collingham captain Tony Cutler was joined by usual partner Maryla Gledhill and with the team short of players Wetherby pair Ann Jones and Tom Harrington  kindly stepped in.

The opening round proved very competitive indeed with two very close rubbers. The Plants are consistent and both powerful players but the crafty duo of Jones and Harrington were certainly not going to roll over. Ann held both her serves in impressive fashion whilst Tom was happy to exchange some amazingly long rallies with Steve given the higher rated man plenty to think about. However finally the extra class of the Wetherby pair ensured victory 8-4, albeit after a titanic battle.

Fiona and Barry are often seen together on court and this Bramham pairing are a tough nut to crack. They took on Tony and Maryla. Once more little between the teams with Tony battling injury after falling from a ladder during the week. He was however covering every inch of the court and with Gledhill a very experienced and seasonal player the duo were enjoying themselves. This was another hard fought encounter but with the classy Chantrey holding firm with some punishing shots from the baseline and Johnson dominating the net, the Wetherby duo ran out narrow 8-4 victors.

So leading 16-8 Wetherby duo Christina and Fiona teamed up for their competitive debut in the ladies and they were soon forming an eye catching pairing. Both are strong individuals and with Christina having a powerful serve it paved the way for an encouraging performance. There are not many ladies at the club as consistent as Fiona and she produced some fine winners with some terrific returns. Ann and Maryla were giving their all together and ensured that many of the games went to deuce. However they lacked the power of the home pair who finally ran out 10-2 winners.

Steve and Barry formed a strong partnership too and Tony and Tom knew they would have to be at their best. Both were now having to contend with injury and the chances of an upset were looking slim. Steve can turn up the tempo when needed, both with his serve and lovely forehand, and with Barry once more picking up anything short with some lethal net play the duo were keeping the scoreboard ticking over nicely. Harrington once more was returning nicely and enjoying plenty of long rallies whilst Cutler was using his spin game to good effect. The Collingham men battled bravely but couldn’t prevent a 9-3 loss.

So Wetherby went into he final round relaxed with a cosy 35-15 lead and certainly maintained their good form. The Plants were 9-3 winners over Tony and Maryla whilst Barry and Fiona enjoyed a 10-2 success over Ann and Tom.

Wetherby therefore did clinch the title following a 54-18 victory. Thanks again to all on show with both teams completing their final games on Thursday Match 7th as part of another Winter League double header. 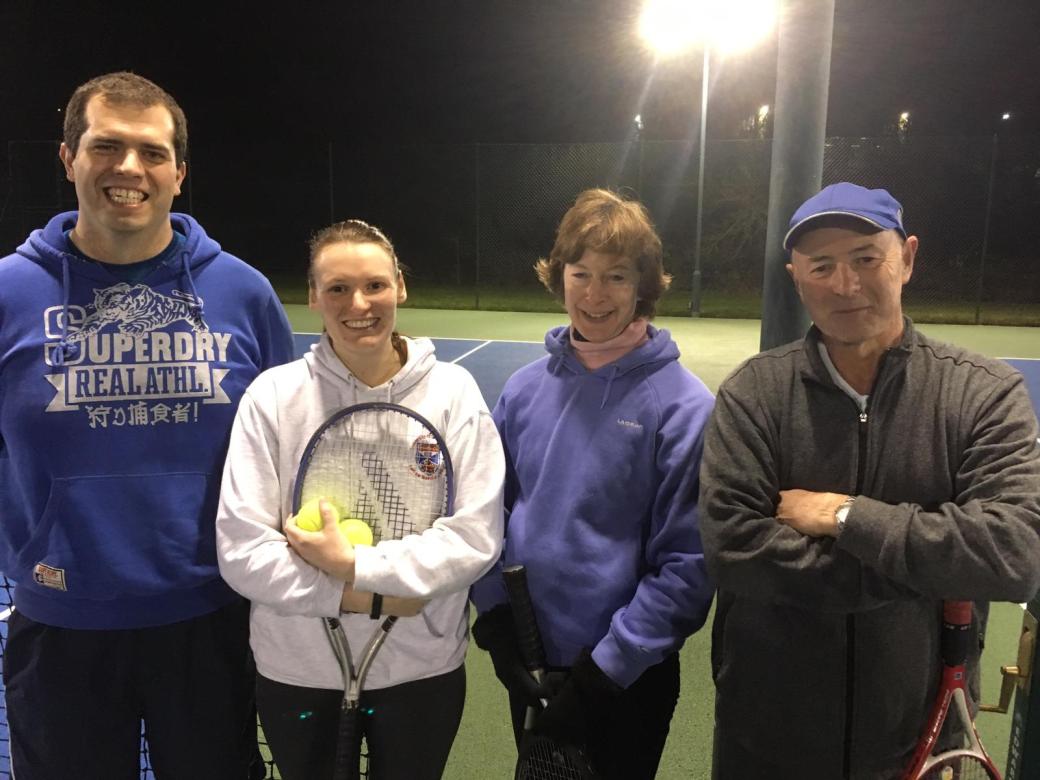 Well done to Steve and Christina Plant joined by Fiona Chantrey and captain Barry Johnson for taking the title with victory here. 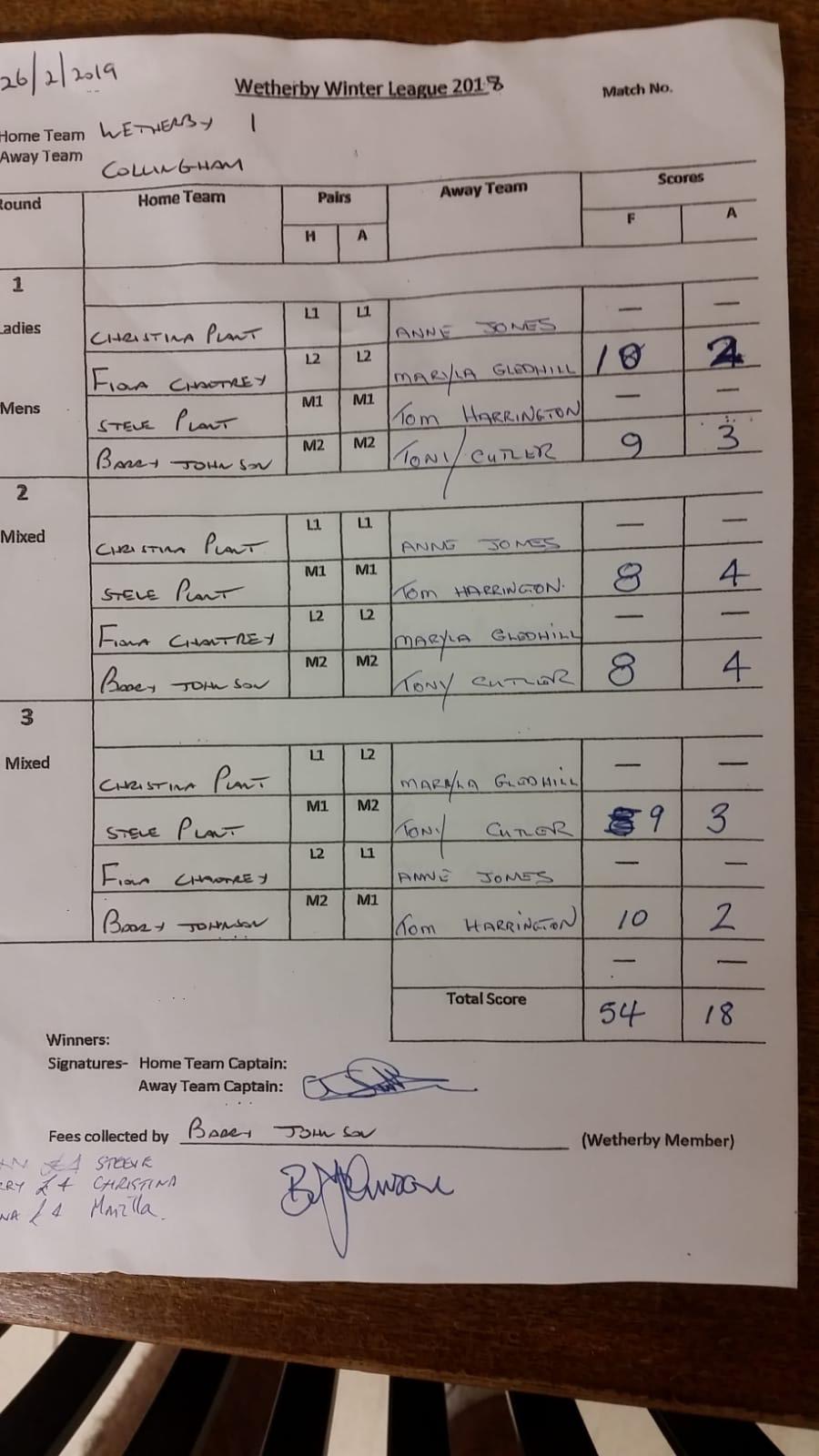 Wetherby 2 were in action on Thursday February 28th as they faced high flying Starbeck. The Harrogate club are looking to secure runners up spot this season after a good term.  They were the home team this evening and fielded a strong looking quartet. It was great to see captain Di Lang make a welcome return from injury and she partnered Steve Hubbard whilst James Mathewman teamed up with Katie Draper who is a regular for the team.

Barry Johnson made a quick reappearance,once more on caption duties, and he paired with Katie Barrett and Jill and Mick Abel completed the quartet.

This was to prove a terrific contest which remained tight throughout the evening. The Abels enjoyed their opening clash with Di and Steve with little between the teams a 6-6 draw saw honours shared whilst Katie and James, who are ranked much higher in the summer leagues, showed that class to defeat Barry and Katie 8-4.

14-10 to Starbeck however meant all to play for in round two. This proved a good round for Wetherby who created a couple of slightly surprising shocks. Jill and Katie are both powerful and well organized on court and they knew they would have to be alert throughout to contain Starbeck first team ladies Di and Katie. Lang was enjoying her comeback but perhaps not at full pace allowed the Wetherby ladies to take control. This was a lovely encounter which saw Wetherby take the match 4-8 to level the overall scores. Mick and Barry were also in tremendous form against Steve and James , who are often seen in Division Three of the Summer mixed leagues. This looked a mouth watering clash on paper and it certainly didn’t disappoint. Some big hitting all round really caught the eye but with Abel his usual all action style the match was swinging towards Wetherby. It was close but a great 5-7 win meant now the Castlegarth outfit led 23-25 and threating a shock.

Katie and James knew they would have to stay strong against the Abels in what looked like another very well matched affair. Little surprise a 6-6 draw resulted. However Di Lang now used this round to show why she is often seen in Division One in the Harrogate mixed league as she and Steve began to move clinically through the gears. Barry and Katie were suddenly finding the going tough and with Starbeck producing some lovely winners the match was now going in the favourites direction. A 10-2 final score line was harsh but fair play Starbeck who rescued the match to finally prevail 39-33.

Starbeck maintain second spot and know victory in their final game with Boroughbridge will guarantee the runners up prize. Wetherby 2 become the first team to complete their fixtures and will finish seventh. Thanks to captain Richard Franks and to all who represented the team this season.