Tonight saw the last double header of the Winter League season. Knaresborough 2 were entertaining Boston Spa whilst Starbeck played Boroughbridge. Katie Draper teamed up with Kevin Lodge at seed one whilst captain Di Lang played her second match of the campaign and with Starbeck short of men, Bradley Triffitt who had been representing Collingham this season stepped in. Boro captain Jamie Jarman was once again leading his troops and he was joined by Kate Lewis from Rufforth who was making her second appearance after playing her other match for Collingham. Charlie Grasby and Chantal Lancaster made up the quartet.

With the rain abating and the wind finally calming the contest began in dry conditions. Draper and Lodge took on Lancaster and Grasby and this proved a great rubber. Little between these two pairs with both men serving exceptionally well whilst the ladies produced some impressive ground strokes. Finally Boro proved just the stronger for a narrow 7-5 success. Over on court 2 Lang and Triffitt junior were enjoying their match with Jarman and Lewis. Again there was some super tennis on show and some incredibly long games with virtually every game going to deuce. Kate and Jamie soon gelled and were both producing the winners and they led 5-2. Back came Di and Bradley and with Brad getting is forehand going and Di starting to dominate the net they fought their way back before suffering a narrow 7-5 reverse.

Boroughbridge therefore led 14-10 as the second round commenced. Chantal and Kate began confidently for Bridge and quickly moved 3-1 ahead in the ladies rubber. Try as they might Di and Katie were always playing catch up but this match certainly proved very enthralling. Some great backhand rallies from Chantal and Di were exciting to watch whilst Kate Lewis suddenly started producing some excellent net play with many timely interceptions. Draper produced some brilliant lobs but Boro held firm for a 8-4 victory.

On court two Brad and Kevin led 3-0 and threatening a shock against their higher rated opponents Jamie and Charlie. Both Boro men were serving with venom and now finding their line and length started to turn the screw. However the Starbeck duo were not going down without a fight and regained the lead 6-5 before Boro took a close last game to leave honours even at 6-6.

Bridge led by eight going into the final round and it was going to take huge effort to reduce that deficit. Bradley and Di were playing with great freedom on the show court and with Brad covering every inch and Di showing consistency they started very well. At 4-0 ahead they were starting to believe they could produce the upset but Chantal and Charlie are far too experienced and crafty and showing good mental strength they fought back. However with Starbeck finishing the stronger and producing a fantastic 8-4 win the overall lead was now down to four.

All eyes on court two but unfortunately for the Harrogate outfit Jamie and Kate’s partnership was blossoming and both were on top form. Kevin and Katie battled away manfully but were always behind and despite a spirited effort lost 8-4 giving Boroughbridge a 40-32 winning margin.

A splendid match played in great spirit typifying what Winter League is all about. 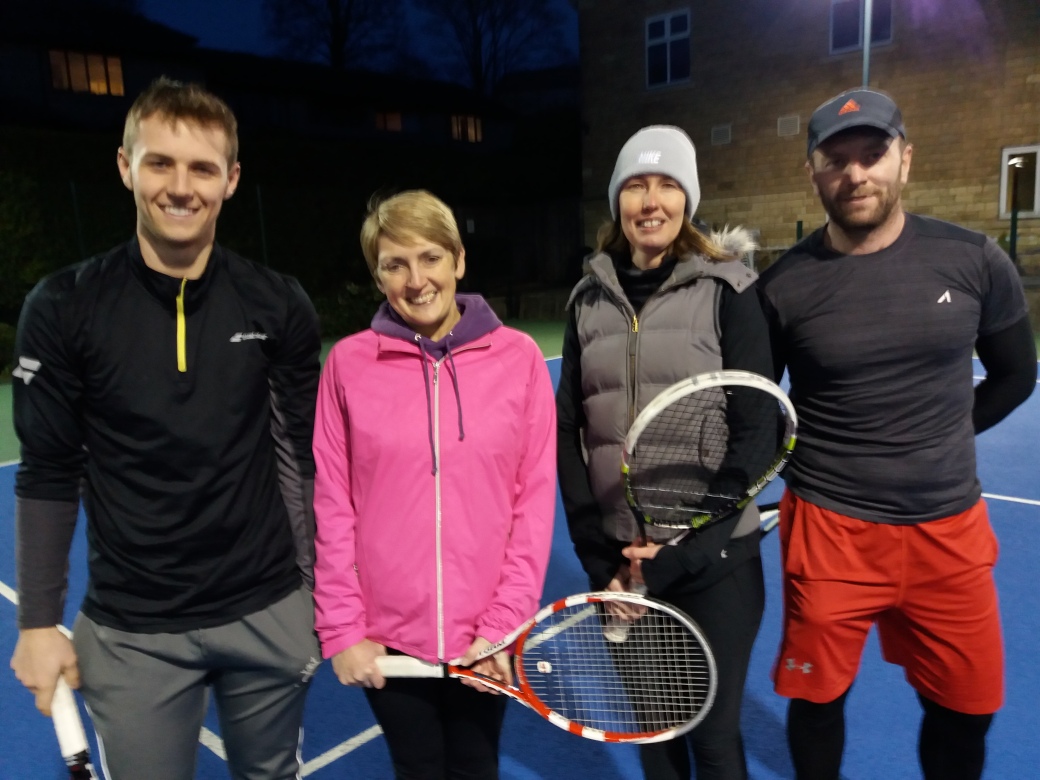 On courts four and five Knareborough and Boston were battling away. Spa had a strong quartet out and on paper were big favourites. It was nice to see Dan Wilson joined by his wife and daughter and the Wilsons have been tremendous supporters of the Winter League this season and it has been great seeing them in action on many occasions. Boro made a real good fist of the opening round finding themselves only trailing 14-10 but in Steven Lewis and Richard Whaley Spa have two very strong and exciting prospects and they won the men’s rubber 8-4. Likewise Dominique Morrisey and Alison Ward are a lovely combination and they ran out 9-3 winners in the ladies to suddenly give themselves some breathing space.

Youngsters Jonny Saddler and Ellie Wilson are undoubted starts of the future for Knaresborough and produced a great effort to narrowly lose 7-5 in the finale but Spa eventually ran out 47-25 winners after another good contest. 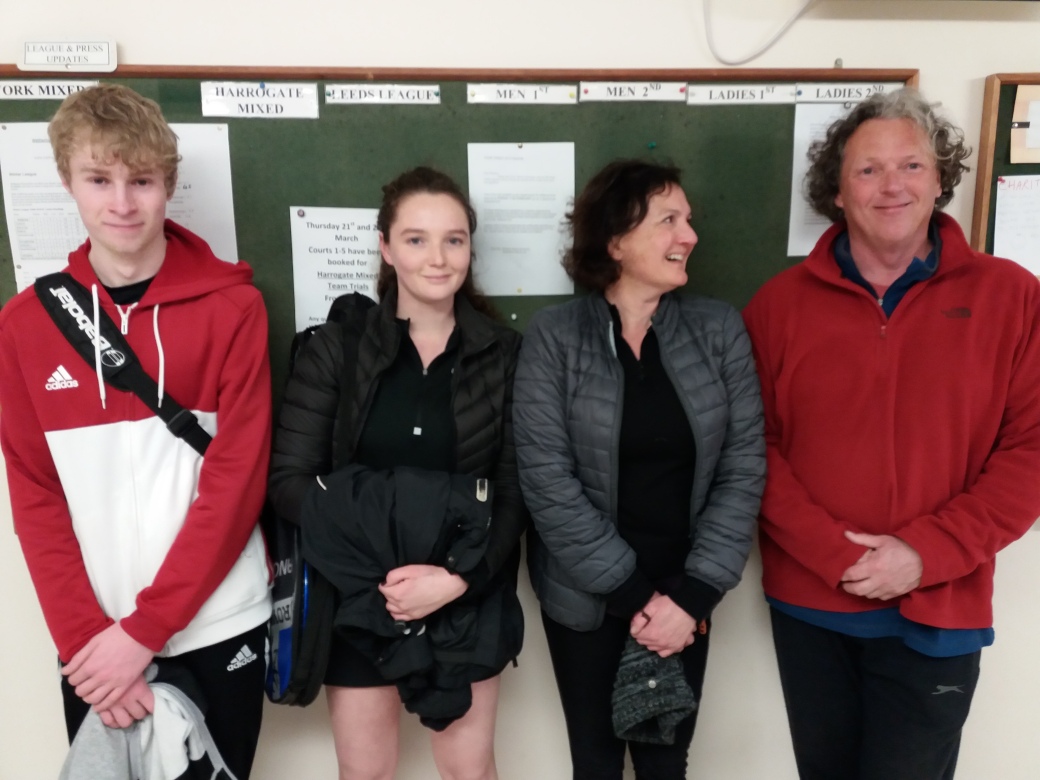 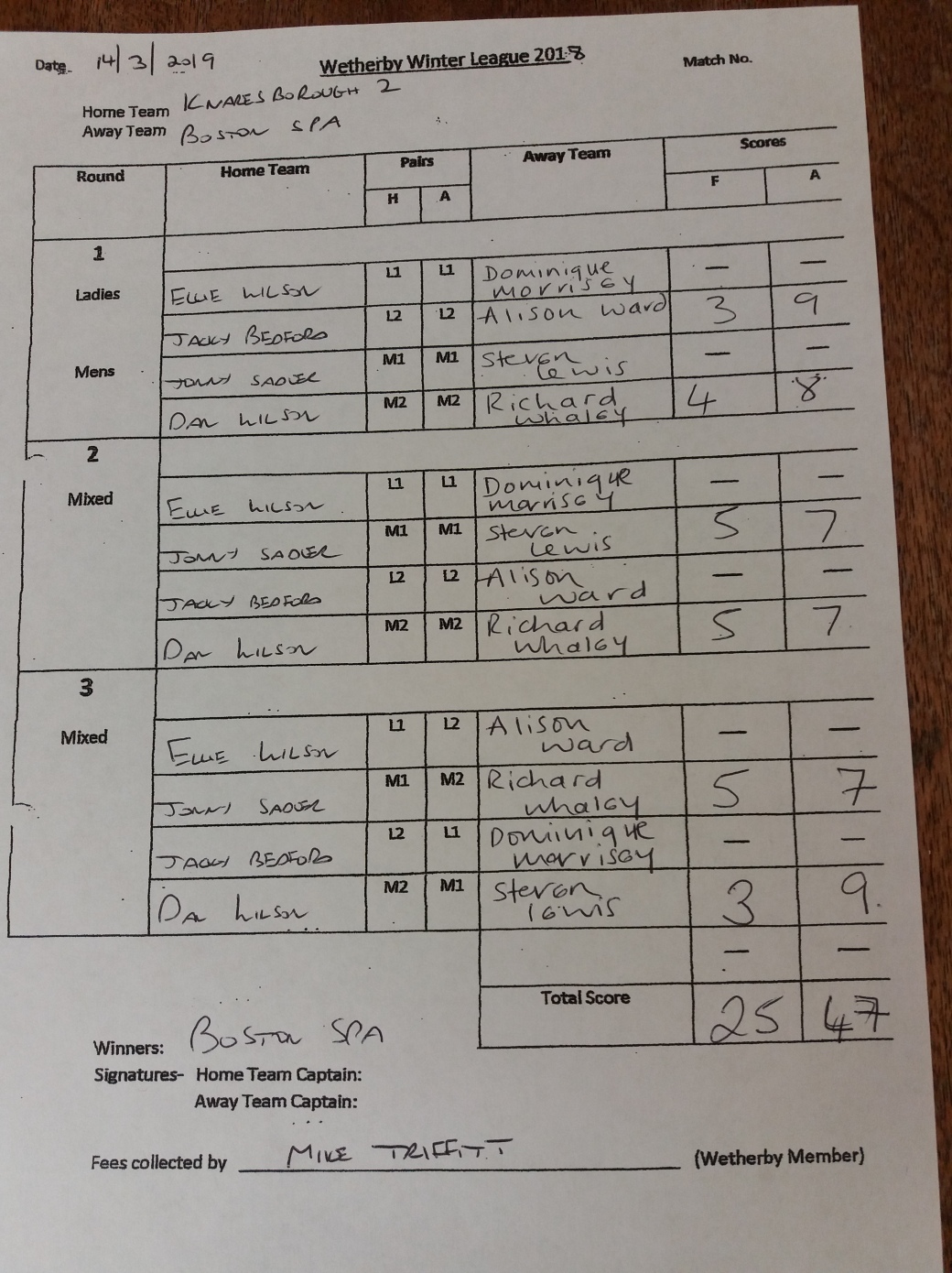 Boston move into second but can be overtaken by Boroughbridge who play Rufforth a week on Friday March 22nd in the final game of the season. Starbeck did well to finish fourth and Knaresborough 2 finished a point better off than Collingham who took the wooden spoon.

Champions Wetherby 1 are five points clear and with seven wins and a draw proved worthy winners after Rufforth had won the last two titles.

Thanks to all the captains and players who have made this a season to remember and Wetherby tennis club certainly appreciates and values your continued support.