Wetherby mixed first team in Harrogate Division One were in action this evening and determined to follow up their opening day win over Almscliffe. The team were thwarted by the weather last week at Knaresborough but no such worries this evening on a pleasant dry night. Visitors West Tanfield had been beaten at Bedale, who are likely to be challenging for promotion alongside Wetherby, but did make a number of changes tonight. Kim Wood and Robert Hutchinson were the only survivors from that loss with Joan Curran, Emma Hague, Tim Simpson and Steve Jones called up from the first team who play in Division One.

Sue Perkins was a late withdrawal for the hosts so Rachel Hill stepped in and with other absence, Charlotte Todd and Josh Bayliss came in too.

Bayliss renewed acquaintance with Hill and this pair have enjoyed good success together previously. They opened up at seed one and faced Emma Hagues and Tim Simpson. This looked a tough challenge and a competitive rubber laid ahead. Bayliss was hitting well from deep as well as serving impressively and the left hander was enjoying himself. Hill was her usual all action self and no area was left uncovered as she flung herself around the court in determined fashion. Simpson is a big hitter too and there was some eye catching and well executed rallies with Hague also impressing. This always looked to be tight and finally the hosts were pleased to just prevail 7-5. On court two captain Helen Robinson was joined by Marc Bickers as they faced Joan Curran and Steve Jones. The Wetherby duo were certainly tested here in a titanic battle with the visiting pair making life extremely tough. Showing great consistency Steve and Joan were content to keep the rallies alive and Marc and Helen had to show great patience before finding a winner. This war of attrition saw both pairs certainly earn their corn but the hosts just carried the more firepower and finally ran out 8-4 winners.

Steve Plant teamed up with Charlotte Todd with the pair meeting just before the start and having to quickly formulate a game plan. They faced Kim Wood and the crafty veteran Robert Hutchinson. Plant was content to adopt a powerful game and he would ultimately carry too much weaponry for Hutch. The Tanfield man is a master of spin and he often caught the Wetherby duo off guard with some tremendous returns. Kim was battling hard and trying to keep the visitors in the tie but Charlotte was starting to find her rhythm and looking comfortable at the net Wetherby powered clear to record a useful 9-3 victory.

Wetherby therefore led 24-12 going into round two. Bickers and Robinson now faced the Wests top dogs and once again Emma and Tim showed why they are such a good combination with some lovely doubles play. This proved another exciting match up and the tennis balls were staring to look rather worn with the men absolutely belting the life out of them with many ferocious and vicious shots. Helen was proving useful around the net and crafterly produced some deft drop shots whilst Emma was looking rather classy with a good all round effort. Litte between the pairs before a narrow 7-5 success for Wetherby left them looking rather exhausted but very pleased. Plant and Todd couldn’t reproduce their opening form and with Steve having a rare off night serving it meant the hosts were struggling to contain Joan and Steve. The consistent play from the Wests second seeds would pay dividends and despite a good effort Steve and Charlotte couldn’t find a way to win and narrowly lost 5-7. Josh and Rachel were now starting to move through the gears as they faced Rob and Kim and the Wetherby first seeds were proving a real handful. Bayliss looked lively and full of energy and he produced some excellent deep winners. Rachel was content to pick off any loose balls that came her way and despite a spirited rearguard action Wests couldn’t prevent a 9-3 win for Wetherby.

At 45-27 Wetherby looked confident and it would take a big collapse to throw away victory now. Steve and Charlotte were once more very competitive as they faced Emma and Tim with Steve seemingly enjoying the hard hitting contest with Tim. It produced a good solid affair with nothing really between the couples. Todd was enjoying a rare appearance and growing in confidence she produced some lovely play. However on this occasion the hosts fell just short but a 5-7 loss meant a useful 19 points in the bag on the night. Josh and Rachel maintained a very high standard with some more fantastic tennis against Joan and Steve. The Wests duo were finding it hard to stay with the Wetherby top pair and couldn’t find any chink in their armor. Oozing in confidence Josh and Rachel completed an excellent evening with a 9-3 win to give themselves 25 points for their efforts overall. It was left to captain Robinson and partner Bickers to complete victory as they had too much class for Kim and Robert in the last. Bickers amazing court coverage proved decisive and he handled all that Hutch could through at him and with some hard hitting and lovely angels of his own was in good form. Helen was solid once more with her short game a joy to behold and a 8-4 victory gave them a super 23 overall.

A good contest with Wetherby needing to find extra reserves to finally see off their opponents 67-41 to join Bedale at the top of Division 2 with both clubs on four points. Thanks to Tanfield for a competitive match and good luck to both this season. Wetherby now travel north to Bedale next week with the winner taking sole ownership at the summit in a match that should prove very intriguing indeed. 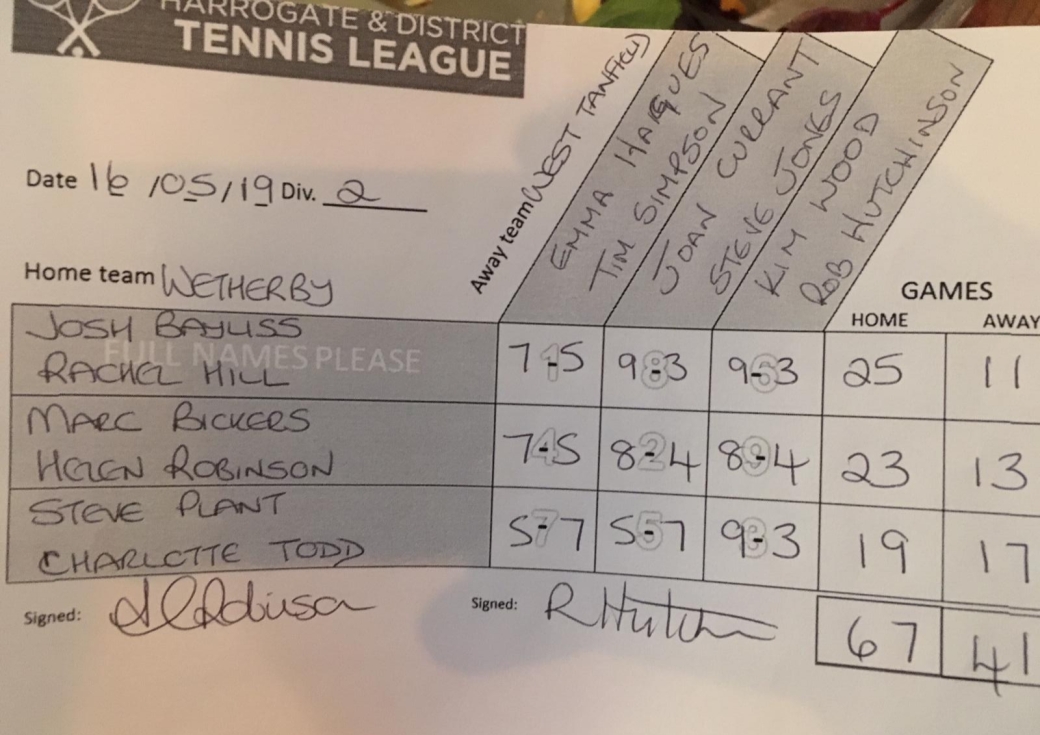