The Leeds men’s first team were in action for a second consecutive day when visiting Kirkstall this evening. Captain Mike Triffitt alongside son Bradley were joined by Ollie Newsome from the team that had secured a valuable point at Wakefield the day before whilst Richard Franks made a welcome return tonight. Youngsters Bradley and Ollie teamed up at seed one with Mike and Richard at seed two. Kirkstall had opened their campaign with a comfortable 8-0 success at St Chads and fielded a strong looking quartet. Paul High has taken over the captaincy from Tim Clement, who has moved to Australia, and was joined by James Maskill whilst brothers Jason and Jonny Catley are new members this season.

The Catleys took on the Wetherby youngsters and this proved a high quality encounter. Ollie who is 17 and Brad 14 were making their competitive debuts together but looked excited as they strode out to court one. The Catleys are smashing lads and formed a powerful duo. Both are big servers and huge hitters and with good court coverage and great net play the Wetherby men were soon on the back foot. Struggling to contain their rampant hosts they fell to a 6-3 opening set loss. Realising they needed to become more consistent the Wetherby chaps were far better in the second set and at 4-4 the atmosphere was tense. However Ollie had used his height to great effect and was hitting some booming serves and returns whilst Brad was finding some incredible angles with many of his cross court winners. The visitors dug deep and ran out 5-7 winners to take a point apiece from a really good encounter.

On court two Mike Triffitt and Richard Franks resumed after the duo had taken three sets from four in their 6-2 victory at St Chads on opening night. This pair may not have the heavy artillery of others in the league but you will struggle to find a more consistent pair and they are difficult to beat. Richard has been a really great addition to the ranks this term and was covering every inch of the court as usual and frustrating the hosts. The Triffitt lob and spin game was of course on show and the duo were playing well. Maskill is a strong player and hitting many returns very deep forcing the Wetherby men on the defensive time after time and with High strong at the net this was going to be a good encounter. Wetherby rode their luck a little but after a close start pulled clear and eventually wore down their opponents running out cosy 2-6,3-6 winners.

So as the second round began Wetherby led 1-3 and were in a strong position to at least force another draw. Ollie and Brad however were wasting little time as they upped the tempo and really started to shine. Ollie was suddenly dominating and with Brad  growing in confidence the pair were playing some eye catching tennis. They gave opponents Paul and James little respite and took the opener 2-6.  Sensing blood the duo knew a second set success would hand Wetherby a crucial away day win and with error free tennis they really began to turn the screw. Kirkstall were helpless to prevent a 0-6 whitewash and the youngsters celebrated in style after such a great evening. Meanwhile on court two the dogged Triffitt and Franks were hanging in against their highly rated opponents the Catley brothers. This was a real contrast of styles with Wetherby spending the majority of the set defending but exploiting any chance that came their way. At 5-3 to Kirkstall the set was going to form but then Triffitt held serve after 10 deuce games and with Jonny suddenly losing his serve the hosts collapsed to lose the last 4 games for a surprising 5-7 success for Wetherby. With the match now won The Catleys did turn on the style in the last set and with some incredible power ran out 6-2 winners.

So a 2-6 overall success for Wetherby was a great achievement and made it three wins and a draw from their opening four league games. Having played more games than their rivals they do sit top of the division and hopefully have done enough to avoid relegation which was the aim at the start of the season. Bradley and Richard have really given the squad a boost and with big guns Alwoodley and Pudsey no longer in Division Five the playing field is far more level this time around. Well done to all on show and a special mention to the hosts who really were a credit to their club. All the sets were played in great spirit without incident and with the weather also holding it made for a very pleasant and enjoyable evening. 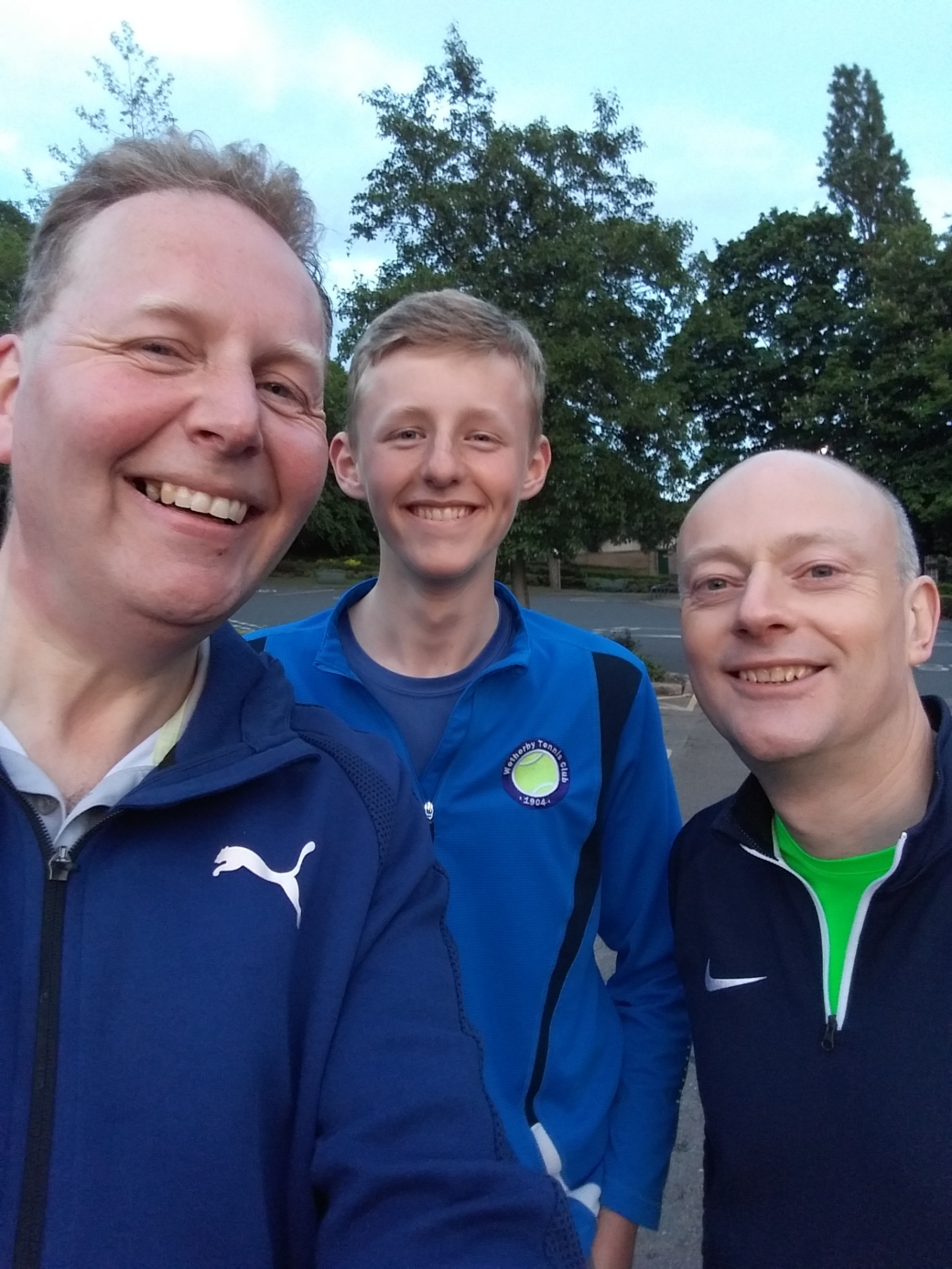 With Ollie Newsome bagging an early lift home, it was left to captain Mike Triffitt, Bradley Triffitt and Richard Franks to take the selfie with Wetherby celebrating an excellant 2-6 success this evening.