Wetherby men’s Leeds first team were celebrating a title success in Leeds Division Five today when opponents Dacre conceded this afternoons game at Castlegarth. This left the hosts clear at the summit with 17 points from 10 games and able to crack open the champagne!

Runners up Wakefield will also be promoted having gained 4 points from two games where opponents conceded , Wetherby therefore will certainly not feel guilty from benefiting today. Wetherby drew 4-4 at Wakefield and beat them 7-1 at home and with  just a solitary defeat at Dacre it’s been a great season for the team.

Mike and Bradley Triffitt alongside Richard Franks and Ollie Newsome were the mainstay of the team with captain Mike the only player not to miss any of the 10 games. Son Bradley missed just the one when on Duke of Edinburgh duty whilst Richard played 7 and Ollie 5. Thanks to the rest of the players who helped to lift the title crown,  your contributions were much appreciated  guys.

Wetherby players dominated the Division 5 player stats with Mike, Brad and Richard filling the top three places. Brad had a fantastic debut season in adult tennis and his powerful game from deep was a real benefit to the team. He hopes to also help Tony Cutlers mixed B team to promotion and is one of the leading players for the Knaresborough second team who are looking to gain promotion in their debut season from York Division 8. Richard has also enjoyed a wonderful season and his energy and consistency has benefited Wetherby throughout. He has improved considerably and has also helped the men’s second team out with three victories this term too as well as dominating the Harrogate Mixed Division 5 where he and partner Fiona Chantrey top the standings and are currently unbeaten! Captain Mike has been able to field a more settled team most weeks than during a difficult spell last season and the team have enjoyed success playing in a section that has been appropriate to their standard this time around. He has really enjoyed playing with Brad and Richard and the stats reflect this of course!.Ollie Newsome has stepped in to provide pace and power and enjoyed his opportunity to shine and he has done very well also with coaching at the club this year, been a real credit in both capacities. 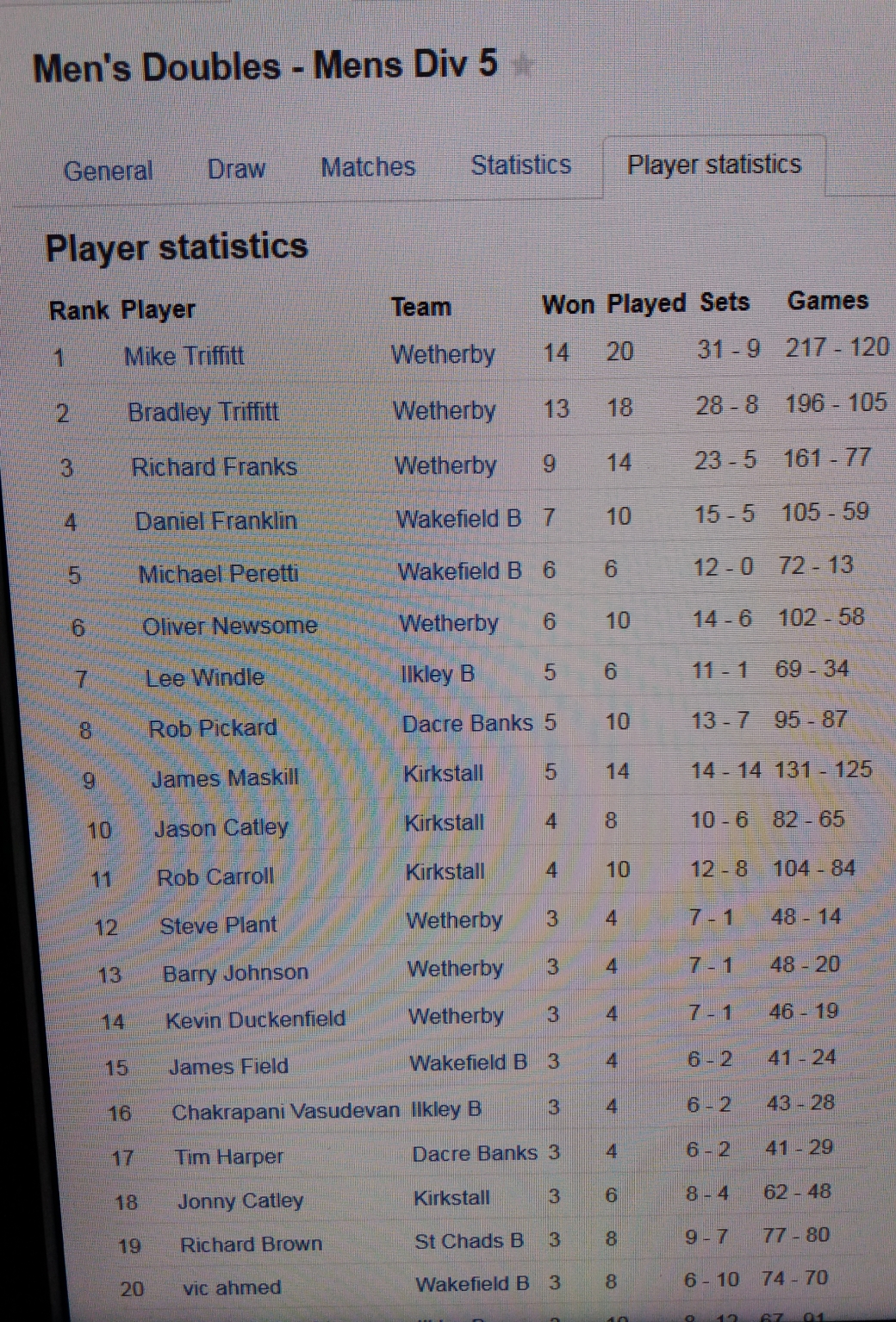 Next season in Division 4 will be a major challenge but for now the chaps will enjoy the summer and cross that bridge next season of course!!!