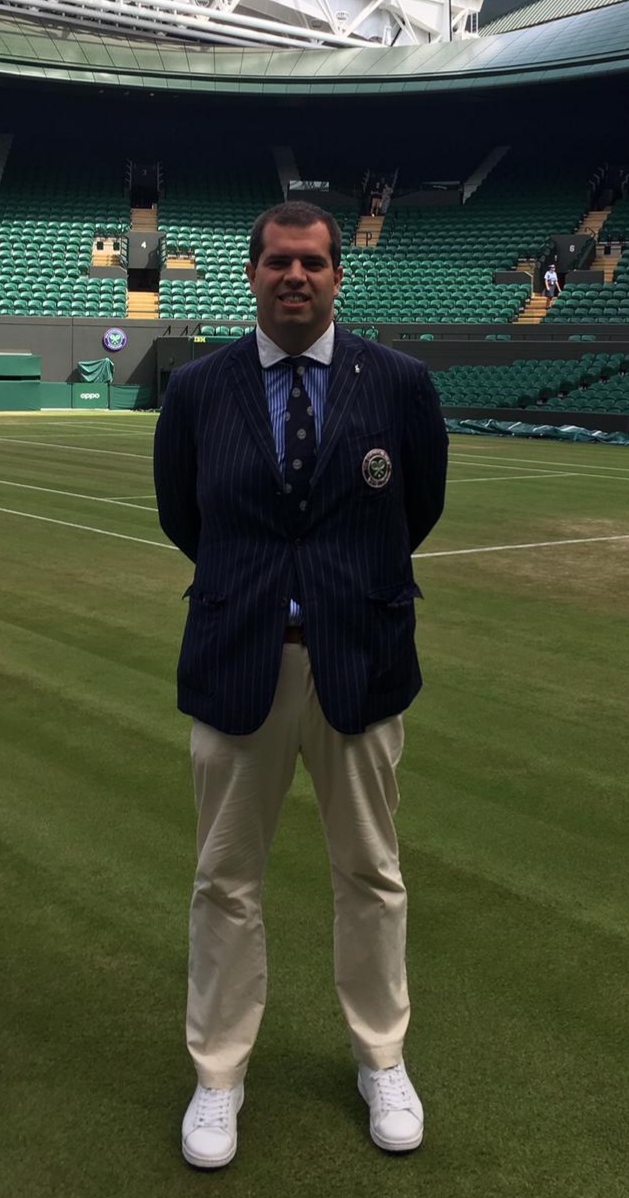 Since moving up from Worcestershire, with his wife Christina, Steve Plant has made a big impression at Wetherby Tennis Club both on and off the courts. Helping Wetherby lift the Winter League crown in his debut season, he is on the verge of hopefully securing promotion for the Harrogate Mixed First Team in Division Two and in his role as men’s teams reserve has featured twice for the Leeds First Team who were champions in Division Five this year. Steve also helps out with coaching both at Wetherby and surrounding clubs and having handed his notice in at work recently intends to pursue this avenue full time. He is also known for his time spent line umpiring across the country and many members noticed him at Wimbledon this summer!

So Steve, the obvious question, how did you begin your line umpiring career?

My Dad was the main organiser of short tennis in Hereford & Worcestershire when I was a youngster, but when my sister and I moved into full ball tennis, he began to look towards officiating to explore a different area to remain involved with the game. When I reached 16 and my sister 21, he suggested we may want to join him in going along to events and getting involved in line umpiring. Dad progressed to a decent level chair umpire and umpired around 50 professional matches but all on the Challenger Level circuit. My sister and I went on various courses and started to officiate ourselves at junior finals days then lower professional tournaments. Being Midlands based, Edgbaston was my nearest major tournament and I was selected to officiate there in 2003 and obtaining good marks and putting in the time required, in 2004 I was selected to do my first Wimbledon.

How did you manage to reach the level required for Wimbledon then?

All officials are graded based on experience and performance, and to move up the grading structure you have to earn good marks by attending tournaments and performing well on court. When I started the more days you were able to do, the quicker you moved up the levels, but now they base it on your average marks over the days you can do. At each event you are given a number of marks from the chair umpires, as every match you go on the chair umpire will give you a mark for your performance on that match. Wimbledon then selects the best officials from around the world in combination with a large amount from the UK that are at the required grade and regularly performing to a good standard. The minimum age to begin a course for Line Umpires is 16 and this will be a combination of classroom and court work. Once passing the initial day, you can apply for an LTA Officials License before starting to take part in events.

This must be difficult with work and regular life getting in the way!?

Yes, the majority of line umpires in the UK are volunteers and only officiate as a hobby. They have to work around their regular jobs and home life. Most of us have to plan our year and take holiday from our day jobs to take part in tennis events. Therefore, Birmingham and Wimbledon tend to be the major ones I undertake each year using up all my holiday entitlement! We do lose a lot of line umpires as they simply cannot do the amount of days that are required. Christina was a line umpire at Wimbledon from 2009 until 2015 but she couldn’t do the days when she started her full time job so stopped officiating, she prefers coming to watch and drinking Pimm’s now anyway!

How about the chair umpires, are they part or full time?

Many are full time and move around the globe officiating at tournaments worldwide, though some do have other jobs and just meet the requirements of their chair grade. They tend to be given contracts by the ATP, WTA or ITF and will work directly for those organisations rather than be assigned by the LTA like those of us who do it part time. They have ultimate control on court and therefore more responsibility, but with that comes a need to be regularly performing at the top level so they are employed on a full time basis.

Have you done any chair umpiring work yourself?

Yes, I have been in the chair on several occasions in the past, although again mostly lower down the pyramid rather than at Wimbledon! To chair professionally you have to be able to be available for 15-20 tournaments annually which doesn’t sound too many but when they are worldwide and last between one and two weeks including travelling, it’s rather a big commitment! I don’t do any chair umpiring now as I didn’t enjoy the pressure when I was doing it on the professional matches, so have stuck to line umpiring for the last few years.

What is a typical day in the life of a line judge with regard to hours?

At every event there is a Chief Umpire, who will assign you into mini teams and organise your court allocation for the day. Each team will have a Team Leader who organises the line assignments for the day, as we change which line we are calling every match. Being a role that requires full concentration we generally work one hour on court, one hour off, although this can vary particularly when events are affected by rain delays and the schedules become tighter. Once all the matches are finished on the court you are assigned to then that is normally your day done, unless going to help out on other courts if people have long journeys home.

What relationship do you have with the players both on and off court?

We are instructed to keep contact and conversations to a minimum in both areas. On court a player may question a call directly at you but this is generally a rhetorical question and the players know we can’t give an answer and they must direct any disagreement straight at the chair umpire. Outside of court, players are mulling around both in the grounds and perhaps at restaurants and bars but again from a professional stance we are advised to not engage in conversion, have photos taken etc as this could bring the integrity of our on court performances into question. We are therefore very close to players especially on court but must respect the professional stance to ensure the integrity in tennis is upheld.

Which major matches at Wimbledon this year did you officiate ?

I was involved in matches that featured Serena Williams, Novak Djokovic and Rafael Nadal on three separate occasions. I was on court when Serena and Andy Murray narrowly lost their mixed doubles third round clash against Bruno Soares and Nicole Melichar in three sets and the crowd really got behind Andy on that occasion. Teenage sensation Cori Gauff, who had earlier beaten Venus Williams, was finally beaten by eventual champion Simona Halep which was another game I took part in but the highlight was been on the line for both men’s singles semi finals. Novak Djokovic, who would go on to clinch the title, beat Roberto Bautista Agut in four sets whilst in an epic Roger Federer took out the flamboyant Rafael Nadal also in four sets before just missing out in the tremendous final.

How difficult is it to make a decision when the ball is moving at such incredible speeds?

Like many things in life, practice makes perfect and judging balls hitting lines from many angles on a constant basis tends to hone ones skills at judging where any ball has landed. As we are just focusing on one line and area it narrows the space we are viewing which allows a better judgement too.

How has Hawkeye changed the way tennis is played and your own role on court?

It certainly has improved the sport and waiting for a hawk eye decision often has the crowd on the edge of their seats in anticipation. The system has improved over the years and is now very robust. Of course having such a system means extra pressure for officials to make the right call and the heart certainly races when your call is been checked on the big screen for all to see!. Thankfully officials are correct around 85% of the time, which considering many are volunteers and don’t do the role full time isn’t too bad, though those in charge would like us in the 90s!

We have seen in football with VAR how slow the process is and frustrating for fans, why is Hawkeye better?

Hawkeye records every ball and there are hundreds of potential decisions that can be viewed if needed. There is a review booth and the main responsibility is ensuring the correct ball is being shown and reviewed. Thankfully with only 3 reviews per player during a regular set the system isn’t saturated with requests and players much decide the best time to appeal. Hawkeye remains a very useful tool in diffusing situations that would have occurred in the past regarding disputed line calls.

Outside of tennis what are your other interests?

I have been sports mad since I was young and follow most sports with cricket being the other sport that I play, again this was my Dad’s influence. I played for my local club, Hagley, in Worcestershire every Saturday since I was 15 until moving up to Yorkshire last year. I still go down and have the odd game for them when I’m visiting my parents. Other than that, I don’t have much time for anything else with coaching and officiating as well as my full time job. Christina and I love to travel but our last holiday was our honeymoon in January 2018 to New Zealand and Australia. Of course, we managed to get a day at the Australian Open and a day at the Ashes cricket whilst we were there!

What are your hopes and aspirations for the next five years?

After returning from Wimbledon, I gave in my notice at my job and I will be a full time tennis coach from September. I am covering the group lessons at Wetherby whilst Head coach Angela Crossley is having a few months off with her new arrival due in November, and I will be working for Tennis Harrogate which is based at 4 different clubs around Harrogate. So, my main focus will be improving my coaching skills and building up my career in tennis coaching. This move does allow me more time for officiating as well, so I am hoping to line umpire at one or two of the other grand slams around the world in the next five years if I am lucky enough to get selected, though as the UK only send 10-15 to each tournament, it’s very tough to get selected. Additionally, I am taking on more days at lower level tournaments to be the Chief Umpire at events in order to have more opportunities in officiating. 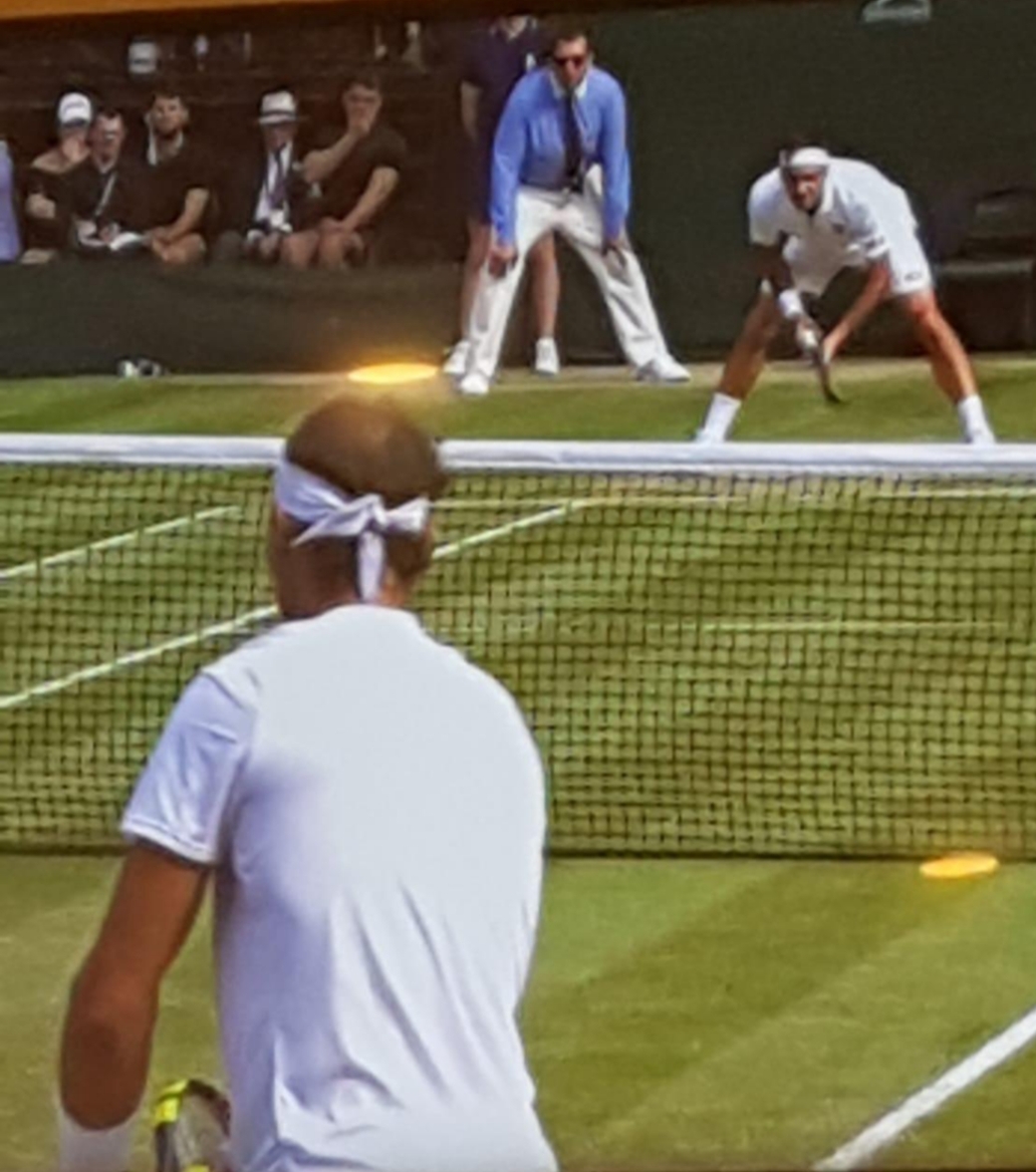